Who could have guessed that the two best 1A softball teams in the state would be from the Copper Corridor?

The championship all came down to San Manuel vs. Superior.

It was the third state championship for the Panthers and the second since 2015 when Superior beat San Manuel 3-0. The Miners took second place last year to Williams and the program finished with an even 2-2 record against Superior this spring.

San Manuel (19-5) earned the top seed in the 1A ranks and Superior (18-6) earned the No. 2 seed this spring and the bracket played out according to plan with the two programs meeting on the final night of play.

This would be their fifth game of the season against the Lady Panthers. The Lady Miners held 2 wins and 2 losses against Superior for the season.

The Miners took a 2-0 lead in the bottom of the first inning after Jazmyne Waddell tripled in Celeste Flores and Waddell scored on a wild pitch later in the inning. Superior tied things up in third inning to make it 2-2 and the Panthers went up 3-2 in the fifth when Waddell doubled and scored on another wild pitch to bring the teams to a 3-3 tie.

Superior pulled ahead for good in the top of the seventh with three runs, aided by a walk and an error with one out.

The game ended with a final score of 3-6.

Waddell picked up 11 strikeouts in the loss and she led the Miners at the plate by going 2 for 4 with a double, triple and an RBI.

Despite the loss of this game, the Lady Miners went the distance and made it to the 1A State Championship game. They walked away with the title of 2022 1A Arizona State Softball Runner-ups hoisted above their heads. The seniors ended their high school careers in the lights of a championship game, leaving it all on the field, and showing the community the strength of #MinerAthletics and #MinerPride.

The Miner families, fans and faithful appreciate the great season and thank the Lady Miners for representing San Manuel so well. 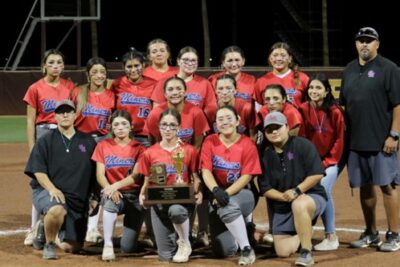 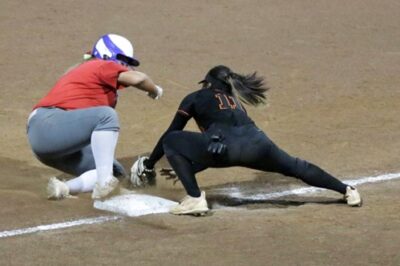 A Lady Miner is safe at third base. (Deb Torres) 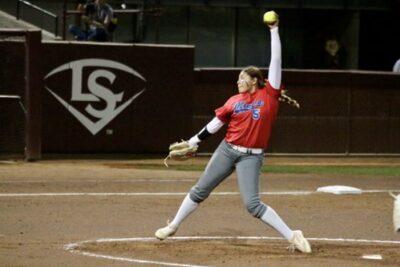 Jazmyne Waddell on the mound for the Lady Miners. (Deb Torres) 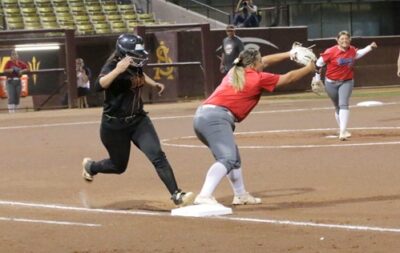 Aubrey Encinas (#4) gets an out at first. (Deb Torres)