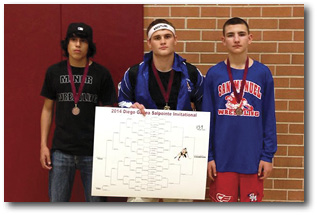 San Manuel Miners’ wrestler Colten Smith won the championship at the Diego Gadea Salpointe Catholic Invitational last weekend. Smith, who entered the tournament as the number one seed, claimed his first championship in the tournament after a couple third-place finishes in previous years. He defeated Campo Verde’s Steve Stryker by decision (6 – 2) to win the championship. Frankie Tamayo (5th) and Franky Renteria (6th) also advanced to the placement round.

“This has always been a tough tournament,” Miners’ head coach Daniel Najera said. “Almost every weight class is stacked with a state champion and state placers.”

The Miners were the only Division IV team in the 25-team field and finished a respectable 15th in the final team standings.

“Our boys wrestled hard and battled down in the consolation rounds earning their way back to the placement round,” Najera said. “This was a great learning experience that will help out when we get to state.”