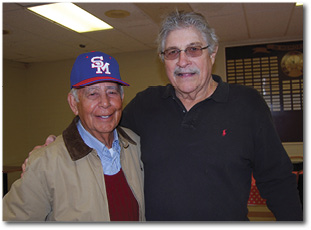 A number of his former players in San Manuel attended the induction ceremony. One of his former players Rex Mirich was inducted with him. Rex graduated from San Manuel in 1959. Manny coached him in basketball and football. Rex is a two time college All American and a member of the College Football Hall of Fame. He played professional football for seven years with the Denver Broncos, Oakland Raiders and Boston Patriots. He also has a connection to Superior. His father Nick Mirich and mother were long time residents. Rex attended grade school in Superior until moving to San Manuel when the Magma mine opened up around 1954-55.

A former player coached by Manny and a member of the San Manuel High School Athletic Hall of Fame, Greg Parker had some nice words to say about Coach Ruiz. These words echo many of the sentiments held by the young men that were lucky enough to have been influenced by him.

“We called him “Coach Ruiz” when we saw him in the gym (which was most of the time), school or downtown but he was so much more. Manny Ruiz was not only my best basketball coach, but he helped all of us that were lucky enough to be with him for our San Manuel High School years.”

“A few of the spin offs from being with Coach Ruiz: We learned respect, responsibility, sportsmanship and love of the game. The best and most important thing I learned was by watching Coach Ruiz and how he handled life. How he handled mistakes, frustration with players, and how he managed pressure. What a great leader he is and always will be! We were so fortunate to be exposed to such a man! Here is a big thank you from one of your players. Congratulations on your Hall of Fame induction.”