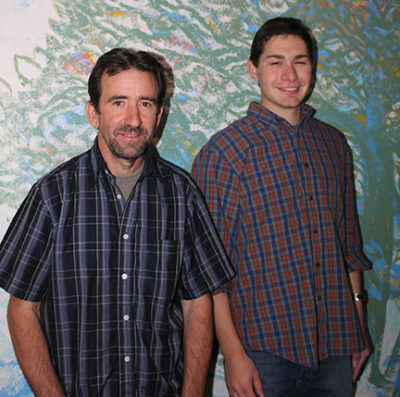 Jessee Walker, left, and Jeremiah Pate. Jessee is a friend of Jeremiah’s and is an inspiration to the young scientist. Jessee suffers from Parkinson’s Disease, the disease for which Jeremiah is seeking a cure.

Jeremiah Pate is a 19 year old student currently attending the University of Arizona. He is studying bio-medical engineering. He has been working in a laboratory on finding a cure for Parkinson’s disease. He believes he has made a breakthrough.

Jeremiah is not your average 19 year old or college student. He has won state and national awards in science including Arizona’s Future Innovator of the Year in 2015. In 2017, his project for curing Parkinson’s disease took 1st Place in his category and 3rd Place overall in the Intel International Science and Engineering Fair. This competition involves nearly seven million competitors around the world. By being a winner in the competition, he received an all expenses paid trip to attend a seminar for young scientists and attend the Nobel Prize Awards in Stockholm Sweden. He also received a $3,000 cash prize and a $40,000 tuition scholarship to the University of Arizona.

His interest in Parkinson’s disease grew out of his joining the First Baptist Church in Mammoth. Jeremiah is from Oro Valley and followed his pastor, Joe Ventimiglia, to the church in Mammoth. Joe V, as he is known, is now the pastor of the First Baptist Church in Mammoth. There he found that there were three or four members of the 35-person congregation that had Parkinson’s. He was inspired by Jessee Walker and another member named Barry and the way they were dealing with the disease. Jeremiah said that Parkinson’s is more common than we think. There are 53 million people worldwide with the disease. He began researching the disease and after being turned down by 19 laboratories around the country, he was approved to use a lab at the University of Arizona that does research on Amytrophic Lateral Sclerosis (ALS), more commonly known as Lou Gehrig’s disease.

Jeremiah has created an algorithm and computer program to research and experiment with gene therapy treatments for the disease. He is working on a treatment that will use the human body’s own cellular defense mechanisms to fight the disease. Using fruit flies that have been programmed with the disease, he is attempting to re-program the protein in cells that is linked to Parkinson’s. It has been successful on fruit flies reversing the Parkinson’s disease and essentially becoming a cure. Fruit flies are commonly used in the research of diseases in humans. Seventy five per cent of the genes that cause disease in humans are found in fruit flies and their genes closely match those of human genes.

The next step in finding a cure is to experiment on human cell cultures. Jeremiah has found a laboratory in Austria willing to do the tests but it will cost $10,000. He has raised nearly half the funds and is looking for donations to supplement the rest of the cost. The Patio Café in Oracle  will be catering a fundraiser at the Oracle Center for the Arts at 700 Kingston St. off of American Ave. on Saturday, Jan. 27, at 6 p.m. The Oracle Piano Society donated the venue for the fundraiser. The menu includes BBQ chicken, ranch beans, Cole slaw, cornbread and cookies. Cost is $35 with proceeds going to “Chasing the Cure”. To purchase tickets or make reservations, visit the Patio Café or call them at (520) 896-7615. You can also drop off donations at the Patio Café for Jeremiah Pate.

If you can’t make it to the dinner, you can still donate by mailing a check to Arizona Youth Empowerment Group, P.O. Box 582, Mammoth, Arizona 85618. Please note on the check or message that it is for Parkinson’s or Chasing the Cure. This is a good cause and could possibly help Jeremiah realize his dream of helping millions of people, including his friend Jessee Walker and members of his church.

Did we mention that this kid is a pilot and has a company looking to build small inexpensive satellites to help companies locate deposits of precious metals, natural gas and water below the earth’s surface from space?