Walking 800 miles for the Arizona Trail 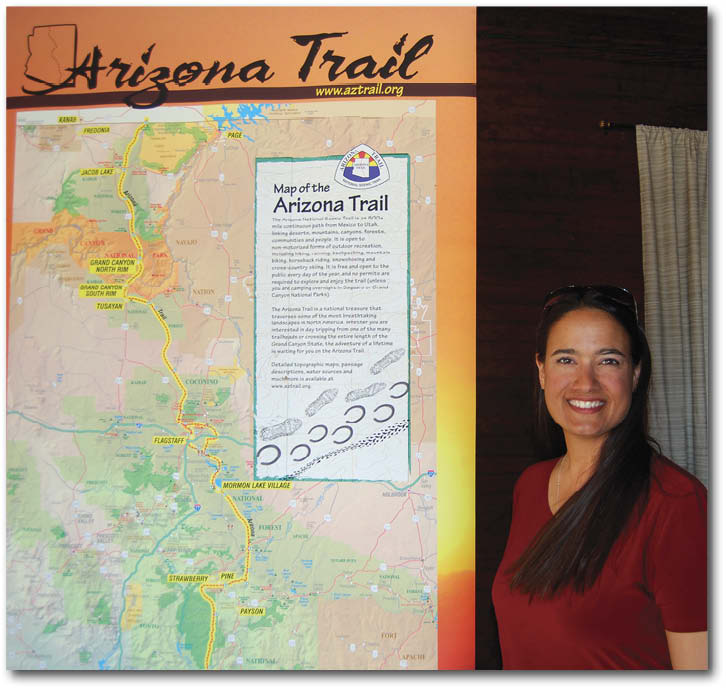 The Arizona National Scenic Trail is an 800 mile plus continuous recreational trail that stretches from Mexico to Utah. The trail links mountains, deserts, forests, canyons, historical sites, communities and people. The Arizona Trail Association is a member non-profit organization that works to maintain and promote the trail. Their mission is to develop public awareness, education and support for the Arizona Trail; encouraging and coordinating management of the trail; and creating an organization to achieve the vision and mission. The Arizona Trail is in need of public support.

The Arizona Trail Association is currently involved in a fundraising campaign to support the future of the Arizona National Scenic Trail. The funds will go toward trail maintenance and protection; repairing segments of trail damaged by wildfire and erosion; installation of steel gates that keep motorized vehicles off the trail; and map printing and distribution. The campaign is called the Arizona Trail Trek and is a celebration of the trail and connecting Gateway Communities one step at a time with a goal of raising $20,000.

The Arizona Trail Trek involves an Arizona Trail Association member hiking the entire 800 miles while stopping in 14 Gateway Communities along the trail for community events. The through hike is an interactive hike which began March 14 and is expected to be completed May 31. It also includes selected hikes and backpacking trips along highlighted areas of the trail and on-the-trail updates by Sirena Dufault who not only will be talking the talk about the Arizona Trail but she is walking the walk, all 800 plus miles.

Sirena Dufault is the Gateway Community Liaison for the Arizona Trail Association. She is also an avid hiker and backpacker. Sirena also has fibromyalgia, a chronic pain illness which she contracted in 1997 after being hit by a car. She was bedridden for a while but found that being out in the sun and hiking helped with the pain. She has not had a flare up in 10 years. In 2008-2009, she did a section hike of the Arizona Trail to help raise awareness bout fibromyalgia.

Sirena was in Oracle Sunday, April 6 for one of the Gateway Community events. The event was at El Rancho Robles. There was live music, food courtesy of the Patio Café and Arizona Trail Ale provided by “That Brewery” of Pine, Ariz. Both of these businesses are partners with the Arizona Trail Association and help support and promote it. Sirena was there answering questions about the Trek and promoting the Arizona National Scenic Trail, Gateway Communities and the new Arizona Trail Guidebook.

Sirena said she was excited to be back in the Copper Corridor area. “It is like a second home to me,” she said. She has spent a lot of time working with the Copper Corridor Economic Development Coalition. She said that this part of the trail is “really spectacular”. Sirena was the Trail Steward for Passage 16c, and was responsible for maintaining a 5.5 mile section along the Gila River. She has built relationships with people in the Gateway Communities and enjoys working with them promoting the Arizona Trail and tourism in the area.

The Trek has generated interest among the public and organizations such as the Arizona Office of Tourism, Pinal County, and Arizona Highways Magazine. Twenty-eight hikers joined her at the start of the Trek at the Mexican border. Forty people signed up to hike with her in Tucson. “It has been fantastic!” “It is an amazing experience,” Sirena said.

The hardest part of the hike has been on days when she felt tired and did not want to hike but because she knew she had a schedule to keep, she would force herself to continue. Once walking on the trail, she was fine. She said she feels good and relaxed now. She has completed one-fourth of the trail. Sirena is scheduled to be in Kearny at Old Time Pizza from 5 to 8 p.m. on April 11 and in Superior at Porter’s Café from 5 to 8 p.m. on April 15. You can follow Sirena’s adventures on the trail on her blog: desertsirena.wordpress.com. Join her on the trail or at a Gateway Community event. Help support the Arizona Trail!

For more information about the Arizona Trail Trek and the Arizona Trail Association go to www.aztrail.org. Learn how you can contribute and find out about the unique and exclusive incentives for donations by following the links provided on the site.