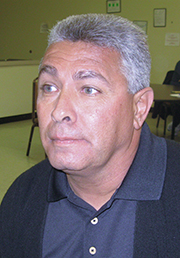 An effort to recall Mayor Jayme Valenzuela got under way on February 12 when a recall packet was secured from the Superior Town Hall by Superior resident Chris Ketron.

Ketron predicts that the recall will take place in August unless Mayor Valenzuela resigns before then. Among those supporting a recall are Superior Chamber of Commerce President Sue Anderson along with some local business owners.

Superior has been in an uproar since it was revealed at the December 2015 Town Council meeting that the town debit card was misused for personal cash withdrawals at assorted venues, including the Wild Horse Pass Casino in Chandler. Mayor Valenzuela admitted to making the withdrawals – eight in all for $2,300 – but said he made a mistake, and since he reimbursed the town would not resign despite demands from four council members and 17 citizens using the public forum at the end of the January meeting.

Since then the Arizona Attorney General’s Office has launched an investigation, with agents invading Superior to collect documents and related evidence. The probe prompted the Pinal County Sheriff’s Office to put Valenzuela on paid administrative reassignment from his day job as a commander in charge of contract and supplies with the County Detention Center in Casa Grande. A spokesman for the Sheriff said that while Valenzuela had a debit card for that job, he had not used it.

Since the revelations of the debit card misuse, David Romero, who functioned as the town’s financial officer while the post of Financial Director went unfilled, came to Mayor Valenzuela’s defense. In a letter to the Superior Sun, he claimed that Valenzuela had refunded $500 for transactions made at the Wild Horse Pass Casino back in May 2014, but that the envelope containing the receipt disappeared from his desk during a lunch break.

Romero is facing charges of his own from Nancy Garcia, sister of Rachelle Sanchez, the former Superior Town Clerk who first reported the debit card misuse in December. Garcia has alleged that Romano had sexually harassed her. But after she filed for a restraining order against Romano, she faced intimidation from Valenzuela, who allegedly encouraged Romano to file a restraining order against her in retaliation.

Romero left the employ of Superior town government after not showing up for work for a week after the January council meeting.

Mayor Valenzuela should be recalled because his actions have hurt Superior morally, and his refusal to resign makes it harder for the town to move forward, Ketron said.