Something strange in your neighborhood? Might want to call some ghost hunters 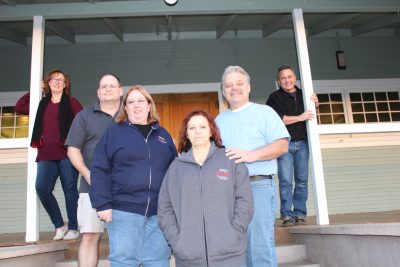 The town of Superior might. And that’s what the Phoenix Scientific Paranormal Investigations is here to find out. Superior has seen its fair share of ghost hunters come to town, but the new group rolling in distinguishes themselves from the pack in a couple of ways — they are all about the science and they don’t mind having outsiders joining in on their investigations. The group has been in existence in the Valley for 10 years. They are a seasoned group – two teachers, one emergency medical technician (soon to be an RN), and an Information Technology Engineer. Another member of the group, Richard Cercone has 24 years in the military and then taught high school for seven years. He has a Ph.D. in metaphysics, focusing on paranormal science. He is interested in the forensics, in the science of paranormal investigation.

“We try to rationalize what is happening. When we can’t rationalize things,” Richard says, “ultimately then we will take a look at the paranormal to see if there is anything to support that evidence or that event.” To substantiate the event or refute it. According to Richard, “a lot of the ghost shows on TV are nothing more than drama and ratings.” 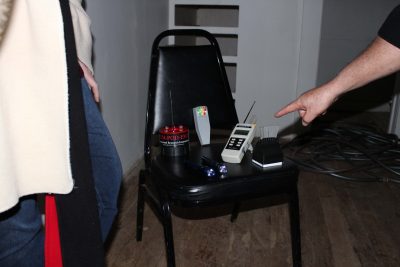 The EM Pod (on the left) measures Electro Magnetic Fields (EMF) and exhibits lights once the antenna is approached. The K2 meter also registers EMF in units of measurement called MilliGauss, so does the Mel Meter to the right of it. As you saw, once the antenna measures EMF, four lights will illuminate based on intensity. The Pyramid is the 7 pronged device that measures static electricity derived from atmospheric conditions like storms. Spirits are thought to use this energy when available. The last two devices are the flashlights that aid in communication efforts as well.

The group has done a lot of investigations in Globe and Miami. This is the first time they have investigated in Superior. What location did they pick for their first investigation? The Magma Club. The group set up seven cameras throughout the club. In such a large building it’s up to the “sensitives” in the group — Karen Schaeffer, Lori Stockton and Jeanne Holcomb – to find the places they feel may have the most paranormal activity. The group carries with them a wide assortment of gear and objects. They have cases full of high-tech gear, a teddy bear that has been fashioned with sensors, and a plastic beach ball a “potential” spirit could move. The group walks around the space they are investigating, often sitting in one room in the dark, asking questions into tape recorders and using their high-tech gear — gear that registers such things as energy in the room and temperature. And everything that is happening during an investigation is being videotaped. 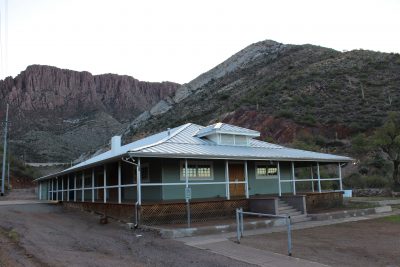 The newest addition to the group is a pop out camper the group uses for technical support — The Tech Command Center. According to one of the techies of the group, David Stockton, the camper ensures there is a barrier between the tech guys and the group investigating. Inside the camper, you will find David and Ron Holcomb watching laptop monitors and listening to recording devices.  The camper is also a place that the team members can go rest in when they get tired. Many of their investigations go on all through the night. The investigation they did of the Magma Club lasted twenty-four hours. 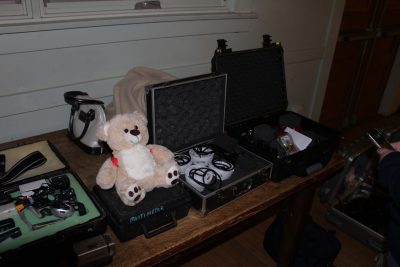 Once all the evidence is gathered, it’s a momentous task going through hours and hours of tape and video. Especially when most the members all have other jobs. It will be a few weeks before the group will have a debrief of what happened and any evidence they found prepared for our town management.