They usually see us at our absolute worst. Sick, injured, or in trouble. No one ever remembers their names and usually they are the last ones to be thanked.

But Saturday night, the Tri-Community’s First Responders were given the spotlight, so friends and family members could see them at their absolute best.

The San Manuel Elks took the time to recognize the outstanding public servants in the Tri-Community, fed them a wonderful meal and invited their superiors to call them out and tell everyone how great they are. It was also an opportunity for community members to express their thanks to the First Responders.

“When there’s a fire, when there’s a shooting incident, when there’s a horrific car accident, people run away, away from danger. You all run to it, to help and to help people,” Pinal County Supervisor Pete Rios said. “For that, on behalf of my constituents, which is all of Pinal County, Muchas Gracias!”

“This is your night. We’re here to honor you, respect you, give you the reward for the community service that you do,” said State Senator Frank Pratt. He also offered his gratitude to those who support the First Responders. “We’d like to thank all your families and the people who support you because without them, you can’t get your jobs done as well.”

“A lot of us can sleep (well) at night because we know you people are out there taking care of us,” said Justice Arnold Estrada of the Mammoth-San Manuel Justice Court.

Hayden-Mammoth Police Chief Tamatha Villar recognized the community for its role in supporting the First Responders.

“It’s important for us to take time on occasion to recognize the fine men and women who make up our First Responders,” Villar said. “It’s also a great opportunity for us as First Responders to thank the public who support us. Because without your support and without the investment that each of you have in your communities, events like this and our ability to appreciate our people wouldn’t be possible. Our jobs would be far more difficult and sometimes futile if we didn’t have the appreciation of the community.” 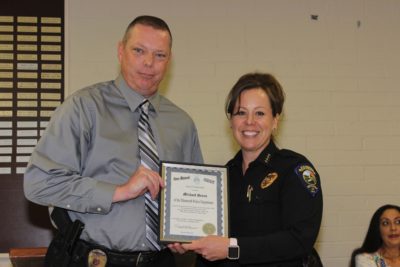 Villar then recognized the Mammoth Police Officer of the Year, Sgt. Michael Green.

Sgt. Green, a retired military veteran, has been with the Mammoth Police Department for the past four years, serving under the many interim chiefs the department had while searching for a permanent leader.

San Manuel Fire Chief John Stanford recognized the families of the firefighters for their role in supporting the First Responders.

“It takes a lot to be a family member of a firefighter that jumps up out of bed in the middle of the night and, bam, out the door they go,” Stanford said. “They may not see them for the rest of the night or they might see them 20 minutes later. So thank you, family members.” 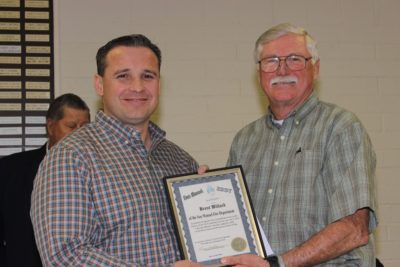 Stanford then named Brent Willard the Firefighter of the Year for San Manuel Fire Department.

Willard has been with the fire department for 10 years, becoming an EMT in 2012 and an engineer in 2014. Additionally, he earned his bachelor’s degree in Science and Information Technology and Software Engineering from the University of Phoenix.

“(Willard) has four confirmed CPR saves in the last three years,” Stanford said. “In the year 2017, he had 261 emergency calls. I think he’s a great asset to the San Manuel Fire Department, all of my people are. It’s hard to pick one person, but we appreciate you.” 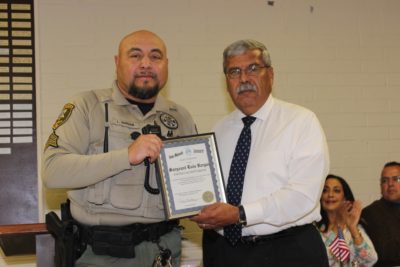 This year’s Deputy of the Year for the Pinal County Sheriff’s Office is Sgt. Luis Vargas. The Honorable Arnold Estrada was asked to present the award. 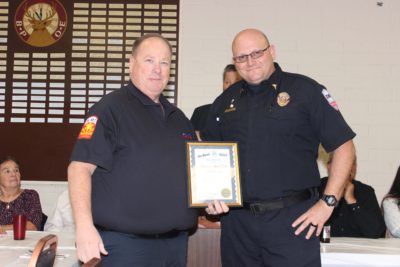 AMR/Tri-City Med named Richard Robbins as the Paramedic of the Year.

Jason of AMR presented the award. “You strive to make your patients very comfortable. You try to do everything you can on scene to assist. I just want to say thank you.”

Robbins has been with Tri-City Med for many years. 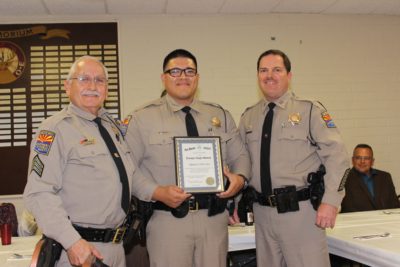 Sgt. Rudy Lujan of the Arizona Department of Public Safety recognized the spouses of local First Responders. “Without them,” he said, “the First Responders wouldn’t be able to do their jobs.”

“These guys are out there to save lives,” Lujan said. “If you have been out there for 30 years like I have you’d know speed kills. Seatbelts kill. DUI kills. That’s what these guys are after. Just trying to save your lives and trying to stop the fire department and EMTs from coming out and taking calls.”

The Trooper of the Year is Angel Gomez. Gomez made 1,429 stops last year, number one in the district, which includes all of Pinal County and part of Gila County. He issued 611 hazardous citations and 56 restraint citations. He also made 20 arrests, which includes arrests for DUI (driving while under the influence).

“Our ultimate goal in the Department of Public Safety is to reduce the loss of life,” DPS Captain Glen Swavely said. “The actions of Trooper Gomez and everybody in the Oracle squad has done a tremendous job in achieving that goal.” 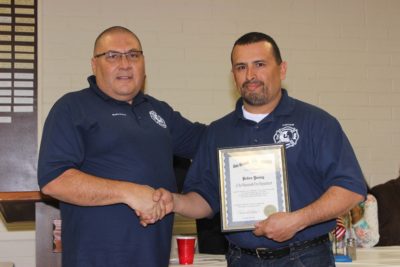 Captain Pedro Young was named Firefighter of the Year for the Mammoth Fire Department.

“He’s shown a lot of unity and leadership with our department and goes out on a limb for anything we have going on,” said Mammoth Fire Chief Marty Ponce.

“For this,” Ponce said, “I’d like to thank you and present this award.” 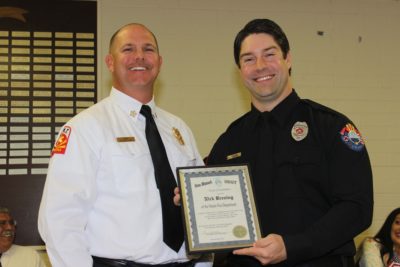 “If you could take the phrase ‘to treat others the way you want to be treated,’ it would say Nick Brening right next to it. The way that he talks to people, the way that he treats them is awesome and sets a great example.”

But Brening, who has only been with the department for two years, has the characteristics that Jennings calls awesome, including his ability to step up in the time of need.

“Nick always wanted to do wild land (firefighting),” Jennings said. “One of the guys who was on rotation couldn’t go, so I called up Nick and said, ‘Nick, hey want to go on a wild land fire? We’re going to California.’ And he’s like, ‘Yeah, Chief, can I call you right back?’”

Jennings told him they were on a tight schedule, but gave him the time he needed. Brening called back two minutes later and told Jennings, “I’m good to go.” When Jennings asked if everything was ok, Brening told him he had just canceled his Alaskan vacation.

“What a commitment, right?” Jennings asked.

Long story short, the crew was canceled the following day, Jennings said, and Nick got to go on his Alaskan cruise anyway.

Brening has been stepping up recently, filling in for firefighters who were taking their own vacations. Jennings said they always hope things go quietly when the regular firefighters are away. It wasn’t so for Brening. In the two weeks he was filling in, he handled five motor vehicle accidents and had numerous other calls. Of the MVAs, two included helicopter rides for the victims, one extrication and one fatality.

“Nick did a phenomenal job,” Jennings said. “We’re proud of you and happy you’re with us.”

Please, remember that the First Responders put their lives on the line for the public everyday. And to the men and women in blue and red, thank you for your service!