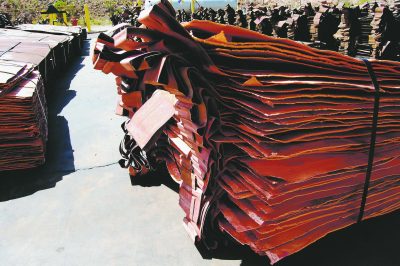 Copper anodes are how the majority of the copper ore from the Copper Triangle is shipped for further processing.

The price of copper has been in a steady decline since 2011, due primarily to a decreased demand from China. There are signs that this trend may be experiencing a slight recovery. The Chinese economy has begun to improve, and demand continues to outpace copper production. Analysts are cautious, but optimistic for the copper price forecast. The copper price closing on Sept 13th was $2.10, up slightly from the start of the month, but it still hovers near a six-year low.

Copper has been an important factor in humanity’s development. The metal is soft and easy to shape, though it is too soft to be useful to make tools. The discovery five millennia ago that combining copper with tin will create bronze, a much sturdier metal, launched the bronze age.  Copper was the first strategic metal, and it became one of the first global trade goods.

The Gold Rush colonized California and Silver was the founding drive behind migration to Nevada, but for Arizona that building block was Copper. Many early Arizona towns were built by companies staking copper mining claims like Phelps Dodge. Places like Bisbee, Superior, Miami and Jerome exist only because of copper mining. Arizona has been the largest producer of copper in America since the early 1900’s, producing almost 2/3 of the copper produced in the US. According to the Arizona Mining Association, the combined direct and indirect impact of copper mining was worth up to $34.2 Billion in the U.S. economy and 12.1 billion in Arizona. Copper is, in fact, one of the “Five C’s of Arizona”: Copper, Citrus, Cotton, Climate and Cattle.

In present day we use copper wiring and plumbing in our houses, there is copper in many parts of our cars, and copper is essential to linking our homes and businesses together via telecommunications. Copper’s high conductivity and malleability make it vital to today’s electricity driven world.

The mines of the Copper Corridor continue to produce a significant amount of the States total Copper and the area still has vast untapped reserves.

Resolution Copper Mine – is a joint venture underground mine owned by Rio Tinto and BHP, and operated by Rio Tinto. The permitting process continues for what promises to be the largest ore body in the US. The Resolution Copper Mine lies on the boundaries of Superior, Arizona. The town is named after the Magma and Superior Company, which mined the deposit in the first half of the last century. Modern Mining technics have made it possible to delve deeper, tapping into the largest ore body in the US at almost 7,000 feet under the surface. The property has not been without controversy, as it has sought the transfer of Forestry land to private hands. While protest against this exchange occasionally resurfaces, the permitting process continues, and the project could begin Copper production as early as 2020.

Asarco Mining – Asarco Mining has three mines in Arizona: the Ray Mine, the Silver Bell Mine and the Mission Mine. The company not only does open pit mining, but it also involved in the smelting and refining of copper. The company annually produces approximately 350 – 400 million pounds of copper. The Ray mine is located outside of Kearny, Arizona. Mining on that location originally started in 1880. In 1952 on what is now the Ray Mine they began open pit mining and now it is a 250,000 ton a day open pit mine. In November 2015 Asarco reached an agreement with the EPA to modify and retrofit their Hayden smelter. The hope is when they are done the Hayden smelter will be amongst the cleanest in the world. Asarco’s Silver Bell operation is located in Marana and each month 1,800,000 tons of ore and waste are mined. The Mission Mine is 18 miles south of Tucson, Arizona. The Mission Complex is made up of the Mission, Eisenhower, Pima, Mineral Hill and South San Xavier properties and the nearby North San Xavier mine. The open pit on the property is currently 2.5 miles long and 1,200 feet deep, and is situated on 20,000 acres. The Mission and Silver Bell operations both have enough ore body reserves to continue mining until 2033. The Ray Mine location has enough reserves to continue mining until 2044.

Copper Creek Mine – This property is a joint venture between a junior mining company, Redhawk Resources, based out of the Vancouver exchange, and Anglo American, a large multinational based out of London and Australia, to develop the Copper Creek property. This mine consists of 29 square miles of patented and unpatented mining claims. Exploration work continues on this property, despite some volatility in the company’s management.

Pinto Valley Mine –  The Mine was acquired from BHP by Capstone Mining Corp. in 2013.  Capstone Mining Corp is a Vancouver, British Columbia company. The Pinto Valley Mine is an open pit mine located east of Phoenix in the Globe-Miami district.  The planned lifespan of the mine has been expanded to 2039 on the strength newly drilled reserves.  In 2015 the mine produced 60,400 (k tonnes) and employed 607 workers.

Carlota Mine – This mine is owned by KGHM International Ltd, a company based in Poland, and is an open pit mine located in Miami-Globe mining region. Since the mine opened in 1990’s it has produced over 72,000 tonnes of copper cathodes.  Active mining stopped in 2014, though it continues to operate a residual heap leach.  In May, the company received a permit to move forward with a plan to place a 10MW solar array on the mine tailings.

Oracle Ridge Copper Mine – A junior mining project incorporated on the Vancouver stock exchange. The mining plan was to re-activate the small-scale operation located outside of Oracle and San Manuel that had operated between 1991 and 1996. The company has been delisted from the exchange and all of the executives of the corporation have resigned. A receiver has been assigned to the company, and its future appears to be in question.

Miami Mine – owned by Freeport MacMoRan this open pit mine is located in the Globe-Miami mining district. The mine has been in operation since 1915. Due to the low price of copper, they have suspended mining operations and are leaching material already stockpiled.

If you ever wanted to get a close up view of a mining operation now is your chance. There are three mines in the Copper Corridor that offer tours open to the public.

The Mission Mine Tour is available through the Asarco Mineral Discovery Center. Asarco Mineral Discovery Center is located at 1421 W Pima Mine Road, Sahuarita, AZ 85629. Tours run on Saturdays only and tour schedules often change, so it’s best to call and make a reservation by phone: (520) 625-8233 or (520) 625-7513. There are no pets allowed on the tour with the exception of service dogs. The cost of the Mission tour is $9 for Adults, $7 for Seniors (62+ years) and Active Military, $6 for Children (5-12 years) and free for Children (0-4 years).

Resolution Copper Mine hosts bi-monthly tours on Fridays from 9 a.m. to noon. The tour focuses on the surface activities on the underground mine. You get a trip to their West Plant where you can see the progress that has been made on the reclamations of the historical tailings pile, you get to visit the entrance to the never sweet tunnel and the water treatment plant, and you get to check out the historical smelter and smokestack. Tours are limited to eight people at a time and for safety reasons everyone who participates on a tour must wear closed toed shoes. The Resolution Copper Mine is located on the outskirts of the town of Superior, Arizona. You can sign up for the Resolution tour online – http://resolutioncopper.com/site-tour-sign/

Florence Copper (located on Hunt Hwy. in the town limits of Florence, AZ) offers tours by appointment. Call (520) 374-3984 or email sitetours@florencecopper.com to reserve your spot. You can also stop by the company’s community office at 130 N. Main St., Florence for more information.