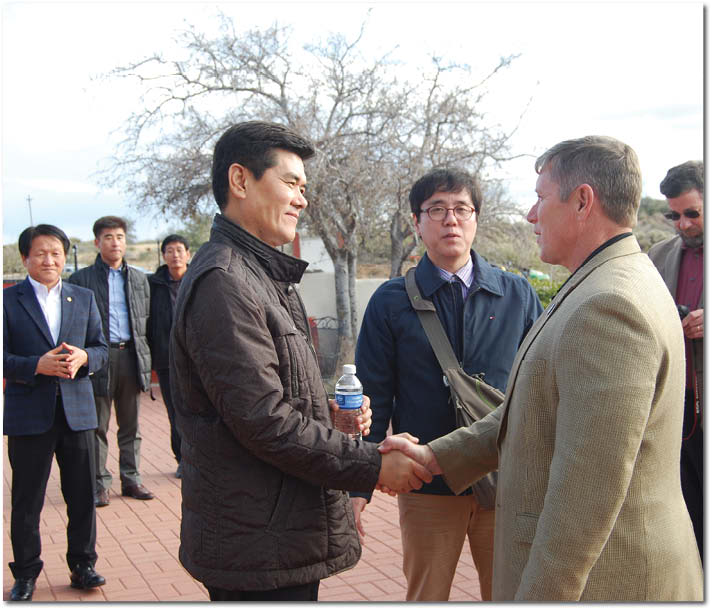 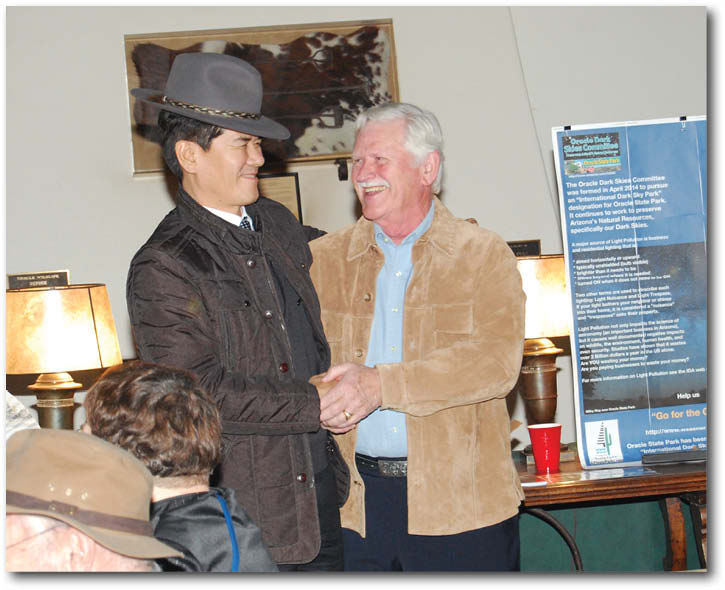 A high level delegation from Yeongyang County, South Korea led by County Governor Kwon Yeong Taek visited Oracle State Park along with members of the International Dark-Skies Association (IDA) last weekend. John Barentine, IDA Program Manager arranged the visit through Oracle State Park which has been designated as an International Dark-Sky Park. IDA had visited the Governor in Korea and spoken with him about creating a Dark Sky Park in Yeongyang and had mentioned the Oracle Dark-Sky Park to him. When he heard that the Korean delegation would be in the area, he thought a visit to Oracle State Park would be beneficial in helping Governor Taek decide about a park in Yeongyang.

The delegation was greeted at the park by the Executive Director of Arizona State Parks Bryan Martyn, President of the Friends of Oracle State Park Jim Walsh, Michael Weasner of the Oracle Dark Skies Committee and Arizona State Park Rangers. Director Martyn spoke to the delegation through translator Won-Kil Jeong welcoming them. The delegation got excited when Bryan told them that he had been stationed in South Korea with the military and flew the Apache helicopter. Bryan had been stationed at Camp Page in Chun Chon, South Korea.

The delegation was then given a tour of the Kannally Ranch house by Oracle State Park Ranger Jennifer Rinio. Jennifer told them about the history of the Kannally paintings, the ranch and the surrounding area. Following the tour, Governor Paek said that the delegation really appreciated what the park has done for them. Governor Paek then presented Director Martyn with a handmade fan which will remain at the Oracle State Park and be displayed in the Kannally Ranch House.

Director Martyn then presented Governor Paek with a “challenge coin” which is a military tradition. It is usually given in recognition of a special achievement. He wished the Korean delegation success in getting their Dark-Sky Park and bid them safe travel.

The Governor and Director then embraced while those in attendance applauded.

Following the meal, Jim Walsh, President of the Friends of Oracle State Park spoke. Ranger Steve Haas then made a few remarks and then introduced Michael Weasner. Michael spoke to the delegation about how the Oracle Dark-Sky Park was started and able to get its accreditation. He talked about the economic benefits a Dark-Sky Park can bring to an area.

“We both have beautiful skies,” Governor Paek said in closing. “We hope that both parks can work together and maybe become world famous parks.”