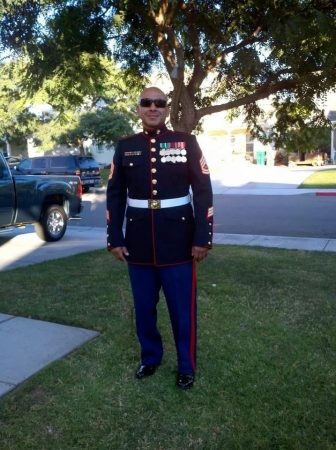 After 20 years in the United States Marine Corps, First Sergeant Juan F. Escalante has retired. His family celebrated this momentous occasion with him.

1stSgt Escalante was born in Kearny, and graduated from Hayden High School in 1993. He is the son of Johnny and Rosa Escalante, husband of Danyell Escalante and father to five children: Alyssa, Anicia, Antonio, Aviana and Amelia.

He enlisted in the Marine Corps on Nov. 21, 1996 and reported to MCRD San Diego,CA on January 13, 1997 for recruit training. Upon his graduation in April of 1997, he reported to Marine Combat Training at Camp Pendleton, where he was meritoriously promoted to Private First Class. He reported to Fort Lee, VA for Petroleum Specialist School.

Upon completion in June of 1997, he received orders to Okinawa, Japan. In August of 1997, Private First Class Escalante reported to MCAS Futenma, Okinawa, Japan, where he served as the Hot Refueling Pits NCO and was promoted to Lance Corporal. In July of 1998, he received orders to MCAS  Yuma, AZ. In July of 1998, Lance Corporal Escalante reported to MWSS-371 Yuma, AZ where he served as Squadron Safety NCO Tool Room NCO, and Publications NCO.

In December of  2000, he received orders to MCAS Miramar, CA upon being promoted to Corporal. In January of 2001, Corporal Escalante reported to MWSS-373 Miramar,CA where he filled the billet of Assistant Embarkation Chief. In June of 2001, he deployed with HMM-165 as part of the 13th MEU.

Sergeant Escalante returned in August of 2003, and assumed the billet of Embarkation Chief. In August of 204, he received orders to Drill Instructor School MCRD San Diego. Upon graduation from Drill Instructor School, Sergeant Escalante reported to Delta Company, 1st Recruit Training Battalion. During this tour, he was promoted to Staff Sergeant and attended the Career Course at Camp Pendleton, CA.

GySgt Escalante returned from Afghanistan in December 2010 and attended the Advanced Course in February 2011. Gunnery Sergeant Escalante graduated with various honors, to include the Gung Ho Award, Director’s Certificate for Physical Fitness, and Honor Roll for Highest Grade Point Average in the class.

In January of 2015, First Sergeant Escalante was promoted to his current rank and reported to 1st Combat Engineer Battalion for duty as the Charlie Company 1stSgt. On September of 2015 he was reassigned to Mobility Assault Company, where he is currently the company 1stSgt.

Congratulations, Sgt. Escalante. And thank you for your service.