Salt of the Earth, Part 1 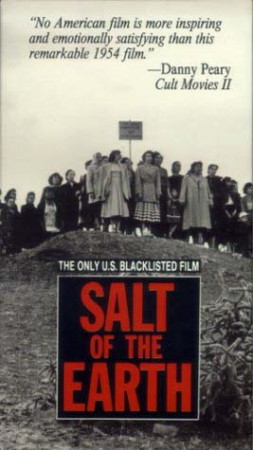 Salt of the Earth Theatrical Poster

Following World War II, the Cold War began almost immediately. The two former allies, the United States and Soviet Union became involved in an intense political and military rivalry. Both countries attempted to spread their influence and promote their political and economic systems to other countries around the world. A number of Americans felt that their nation’s security depended on preventing the spread of communism both within the country and abroad.  A number of politicians and government officials passed laws that created an atmosphere of fear and distrust around the country. Anyone who had political views considered radical stood the risk of being investigated and/or branded a communist. Those radical views included union activities and civil rights activism.

In 1947 the House Un-American Activities Committee (HUAC) held nine days of hearings into the alleged infiltration and influence of Hollywood by communists who used the film media for communist propaganda and the promotion of communist views. Walt Disney testified that the threat of communism in the film industry was a real one. Author Ayn Rand testified even implying that Louis B. Mayer, head of MGM Studios was a traitor for a film he made about Russia during World War II. Future President of the United States Ronald Reagan named several members of his union as being communist sympathizers. Reagan was President of the Screen Actors Guild. The Screen Actors Guild would establish a policy that made its officers swear a loyalty oath that they were not members of the Communist Party. Many years later it was found out that Reagan was an FBI informant and gave names of people in the film industry who he believed to be communists or communist sympathizers.

Ten of the 43 people put on the witness list to testify in front of the committee refused to answer the question, “Are you now or have you ever been a member of the Communist Party?” They cited their first amendment rights as reasons for refusal. Some of them attempted to make statements that the committee and what they were doing was unconstitutional. The Hollywood Ten as they became known were charged with contempt of Congress. They were later tried, convicted and sentenced to one year in prison.

A few weeks after the hearings, the Motion Pictures Producer Association met and promptly fired the ten men. They then set in place an industry wide “blacklist” of anyone suspected of being a communist or sympathetic to the communist cause. This prevented anyone on the list from working in the motion picture industry in Hollywood. Over 300 people would be black listed. The black list would include writers, directors, producers, musicians and actors. Many careers would be ruined. The blacklist would last until the 1960s. Many scholars believe anti-Semitism was also involved in the blacklisting.

One of the Hollywood 10 was Herbert Biberman, a screenwriter and Director. After serving six months in prison he was released. He found himself without a job and unable to work in his chosen profession due to the blacklist. Another member of the Hollywood 10 was Adrian Scott a screenwriter and producer. As a producer his best known films were Murder My Sweet (1944) and Crossfire (1946). Crossfire was nominated for five Academy Awards including Best Picture. It starred Robert Mitchum, Robert Young and Robert Ryan. It was the first major motion picture to deal with anti-Semitism.

Biberman and Scott teamed up with screenwriter Paul Jarrico and others and formed their own production company, Independent Productions Corporation. They planned to produce movies independently. They then began to look for a story and script. Jarrico heard about a union strike in New Mexico. He traveled to New Mexico and met with Clinton Jencks a union organizer for Mine Mill. Jencks was known as “El Palomino” to the Mexican-American workers he struggled with to build their Mine Mill union. Like the palomino horse’s gold or yellow coat and white or silver mane, Jencks stood out with his  blond hair and light skin among the brown skin and black hair of the Mexican Americans he worked with. He was a life long labor and social activist.

Jencks told Jarrico the story of the union’s struggle during the 15 month long strike against the Empire Zinc Company in Hanover, New Mexico. Jarrico returned to California and told his partners the story. They agreed that this is the movie they would make. All they needed now was a script and then a cast and crew. Jarrico asked his good friend and brother-in-law, Michael Wilson to write the script. Wilson had been fired by RKO Studio owner Howard Hughes and was on the blacklist even though he had won a Best Screenplay Oscar for his work on the film A Place in the Sun in 1951.

Two more of Wilson’s screenplays would go on to win Oscars although he would not receive credit for them due to the blacklist. The films were Bridge on the River Kwai and Lawrence of Arabia. Other well known films he wrote were The Sandpiper, Friendly Persuasion and Planet of the Apes. Wilson traveled to New Mexico and met with the pre-dominantly Mexican American union members and their families. He agreed to write the script and within a few months the script was complete and the filmmakers began to gather a cast and crew. This is when the film’s creators would begin to have problems which would eventually grow into a conspiracy to prevent Salt of the Earth from being made or shown. 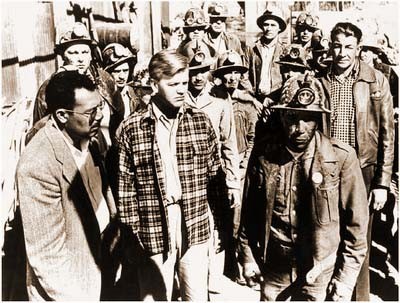 Scene from Salt of the Earth: Miners before they strike.