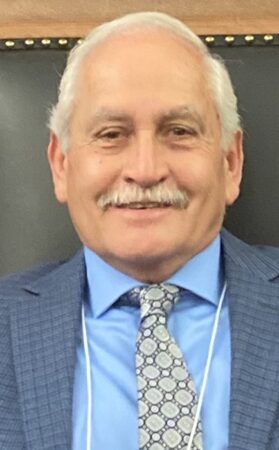 Rudy moved to the communities of San Manuel and Oracle, AZ in 1973, where he worked at the San Manuel Magma Copper Company for almost 16 years.  He left the mine and began his law enforcement career with the Pinal County Sheriff’s Office where he attended and graduated as the “Best All Around Cadet” and president of his class at the Police Academy.  As a deputy he had the pleasure of teaching Drug Abuse Resistance Education (D.A.R.E). He had the National DARE student of the year and was invited along with the student to the National DARE festivities in California in 1990. Deputy Lujan taught at all the schools in the Copper Corridor.

He was recruited by the Arizona Department of Public Safety in 1993, where he retired honorably in 2018 as Sergeant.  As a Sergeant he supervised in the cities of Phoenix, Tucson and Oracle.  His squad was awarded Squad of the year in 2010, because of his mentoring and leadership. His squad was also awarded District Six Squad of the year in 2017. He was also awarded five Director Citations Awards, Employee of the Year, Southern Bureau Officer of the Year and District Six Trooper of the Year. In the Department of Public Safety, he worked as a Field Training Officer, Detective, Cadet Training Officer, Quality Assurance Specialist, Recruit Training Officer in the Arizona Law Enforcement Police Academy, General Instructor, Endurance Instructor and Interim Police Chief in the Town of Mammoth.  Rudy attended Rio Salado and took classes in Extraordinary Leadership while at Department of Public Safety and majored in Criminal Justice at Kaplan University. As a detective and fluent Spanish speaker, he was instrumental in seizing $53 million from the coyote (persons known to bring illegals across the border).

After his retirement from Department of Public Safety, Mammoth City Council hired him for the Position of Mammoth Police Chief, because of his hard work and department improvements as a prior Interim police chief. Chief Lujan quickly recognized the need for vehicles at the Mammoth Police Department.  He quickly acquired five vehicles at no cost to the City of Mammoth.  Chief Lujan applied to the Apache Gold Casino for monies towards acquiring new computers and replacing the outdated computers in the police offices and dispatch consoles.  911 phone and recordings were also down.  Chief Lujan put in for the asset forfeiture monies through the Pinal County Attorney’s Office and was able to acquire $17,000 to bring the 911 phones back up, which was a win-win situation for the public and the County Attorney’s Office.  Chief Lujan was able to get the AR-15 rifles fixed, so the Mammoth Police Officers were able qualify and carry. He very proudly served the citizens of Arizona with 35 years of law enforcement.

Rudy Lujan has always been very active in his community. He was appointed as President of the Unity Council at St. Helen’s Church in Oracle; coached girls’ softball; served in the Oracle Volunteer Fire Department where he was instrumental in starting the Explorer program and assisted in implementing the helicopter landing pad next to the Oracle Court House, to better serve the communities and citizens; and served as a member of the wildland brush fire fighter, where he went to brush fires around the State of Arizona.  He was incident Commander of the Aspen Mount Lemmon Fire. He served and retired from the Oracle Fire Department after 25 years as the Assistant Fire Chief.

Rudy submitted his resume and was appointed by the Pinal County Board of Supervisors unanimously over other applicants as Justice of the Peace for the Copper Corridor Justice Court in June 2021, where he proudly continues to serve his community to the present as the incumbent judge.  As a proactive judge, Rudy found out that one of the biggest complaints litigants had was they felt they were not completely heard in the courts.   Judge Lujan now ask both sides if there is anything they wish to tell the court to make sure everyone is completely heard.  Judge Lujan makes sure victims are heard prior to sentencing of defendants.  Judge Lujan serves the court with empathy and justice. Because of his working closely with a very hard-working staff, the court calendar cases and training are always up to date.  Judge Lujan completed his New Judge Orientation classes and received his certificate from the Supreme Court and continues to stay up to date and goes beyond his training by taking extra hours of judicial training.

Judge Lujan is a Republican and is asking for your vote to allow him to continue to serve as he very faithfully has in the past.  Judge Lujan being proactive in his career will continue to be proactive to make sure he leaves the Copper Corridor a much better place as he did as past Chief of Police, Fire Chief, DPS Sergeant, softball coach, and President of St. Helen’s Unity Council.