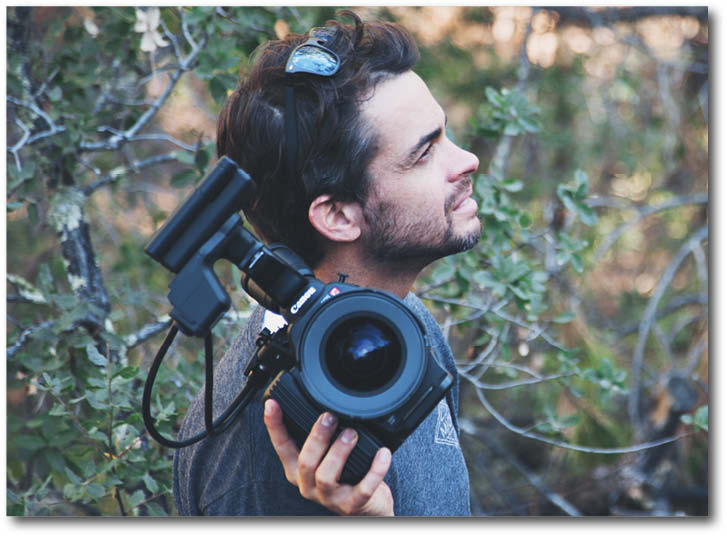 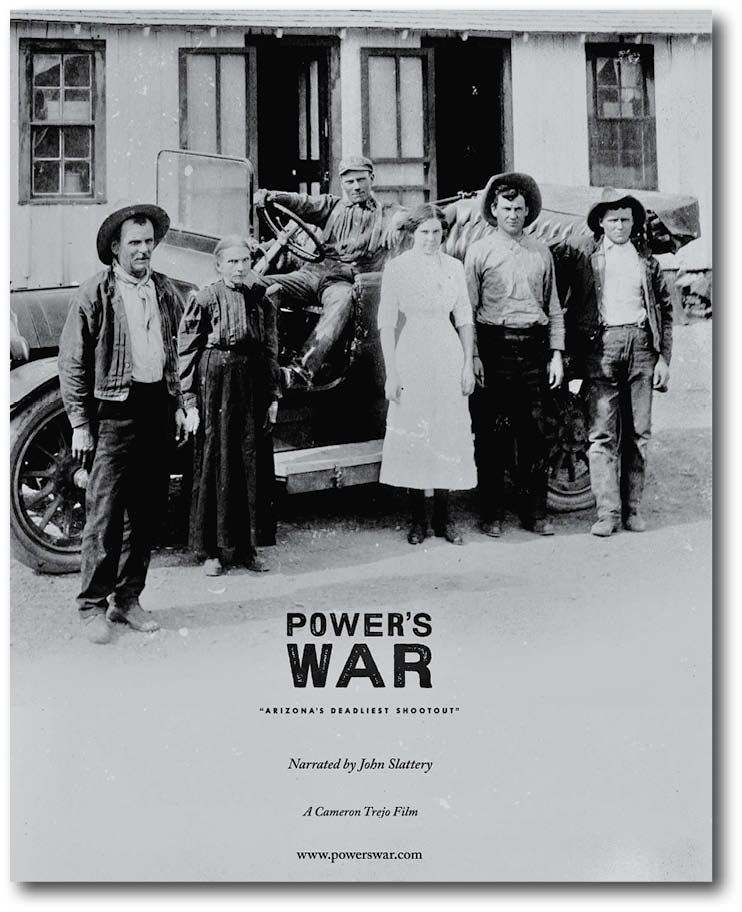 On Feb. 15, 1918 theGraham Guardiannewspaper’s headline said “OFFICERS KILLED IN BATTLE WITH SLACKERS”. The front page told the story of a shootout in the rugged Galiuro Mountains where four men were killed, three of them local lawmen. The gun battle was deadlier than the gunfight at the OK Corral. It would become known as the Power Shootout.

A new documentary film has been made which attempts to find out the truth about what happened that fateful day. Power’s War is the name of the film and has been three years in the making. It is directed and produced by Cameron Trejo. Heidi Osselaer is the lead historian for the film project. Cameron and Heidi have spent three years combing archives, interviewing family members and historians, and visiting the Power cabin which still stands today.

The film will be released soon and Cameron and Heidi will be traveling around the country screening the movie. Power’s has been officially selected to be screened at the 2015 Maryand Film Festival.

Through the power of Facebook and email, Cameron was interviewed and talked about the making of the film and gave his insight about the story without giving too much away. You can learn more about Power’s War and view the trailer at www.powerswar.com or on Facebook: www.facebook.com/powerswar. The interview follows:

How did you find out about the Power Shootout and what made you interested in the story enough to want to make the documentary film?

My father in law gave me the bookShootout at Dawnabout four years ago. The story of the shootout fascinated me! I was even more intrigued however by all of the controversy and questions left unanswered by the book. I began doing some very light research, reaching out to family members of the lawmen that I was able to track down. My interest in producing a film about the Power Shootout really solidified after talking with family members. So many of them told passionate stories of this nearly century old tale! There were too many questions left unanswered – too many rumors – the why was missing from both theShootout at Dawnand theEvaders.

Who else is helping you with the film and what is their background?

Essential to me from the outset of the project was ensuring that the story I chose to tell was historically accurate. I set out to find a historian that was well versed in territorial and early 20th century American history. After reaching out to several individuals I was somehow directed to Heidi Osselaer. Her contribution to the film has been nothing short of amazing. Working alongside Heidi has given me a great appreciation and love for history, as well as a tremendous amount of clarity in telling the story of the shootout. This film would be nothing without Heidi Osselaer.

My long time collaborator and business partner Dagen Merrill co-produced the film with me. Dagen is an extremely talented creatie and he has contributed to the entire process, writing, editorial, as well as three different hikes down into Power Garden/Cabin.

Dodge Billingsley, an award winning documentarian and Arizona native, helped with the writing of the script – a monumental task. The story I decided to tell was constantly evolving with each interview we shot and each bit of new research that trickled in.

My cinematographer Wesley Johnson lensed all of our historian interviews marvelously. Wesley’s father graciously provided a helicopter ride to the Galiuros, where I was able to get my own look at the historic Power Cabin. Wesley also made a trip down to the Galiuros in early 2013.

John Slattery of Mad Men fame narrates the film and we are beyond excited to have him on. I will admit that his name wasn’t on the top of my wish list until I heard his work on the audio book A FAREWELL TO ARMS. He is an amazing talent and his read is a perfect match for the tone I’ve created in my film.

There are scores of others who have contributed including my composer Christopher Brady, time-lapse photographer Dustin Farrell, as well as many production assistants from Eastern Arizona College and Arizona State University. I’ve also had a tremendous amount of help from archivists and historians from AHS, Arizona State Archives, Arizona State University’s library, Graham County Historical Society, Pinal County Historical Society, and so many others. This film has been a massive collaboration between very talented and giving people for which I will be forever grateful.

Tell me about yourself, your education and film background? What films have you made or worked on?

I graduated from Arizona State University in 2003 with a Bachelors of Science in Accountancy from the W.P Carey School of business. My degree has helped me to lay a solid foundation for a production business that has continued to grow since it’s inception several years later. I’ve had the opportunity to shoot on documentary and film projects all over the world. In 2010 I directed a short documentary entitled REFLECTIONS OF CHRIST that was viewed by over one million people across the globe and later picked up for distribution by Deseret Publishing. The project was so successful that a follow up was commissioned two years later, which I also directed and shot at the historic Copan Ruins in Central America. In 2012 my cinematography on the short film EVERYTHING IS BEAUTIFUL won best cinematography at the DC Shorts Film festival. The past several years have been extremely busy producing national television and web commercial. POWER’S WAR has been a project three years in the making.

How much research and interviews have gone into making the film? Tell me a little about the interviews with family members of the lawmen killed in the shootout. Were you able to interview anyone connected with the Power brothers?

I think it is impossible to quantify the amount of research that has gone into the film. Heidi Osselaer has traveled to four different states, combing through archives, uncovering small details that have provided tremendous insight to this somewhat undocumented story. Archivists from several states also spent a tremendous amount of time fulfilling requests from Heidi and myself. The process was much more involved than I could have ever imagined. I’ve enjoyed every minute of it – truly.

Part of the research process included interviewing family and friends of the lawmen involved in the shootout and Power Family. We interviewed nearly 20 different family members, each with their own take on the controversial events surrounding and leading up to the shootout. I think that is one of the aspects of this story that has always intrigued me so much. This story is still alive in the hearts and minds of so many nearly one hundred years after the fact. Howard Morgan was the only Power Family relative I interviewed for the film. He is an amazing human being and was beyond gracious with his time.

Meeting so many wonderful people from so many different walks of life has been a real blessing to me and one of the greatest takeaways from this project. Each family member interviewed not only allowed us in their home to shoot an interview, but went above and beyond to stay in touch and support the film in their own way. I’ve gone to great lengths to tell the tragic story of the Power Shootout as impartially as I am able in order to protect and honor the sacrifice that each person involved gave in one way shape or form. Generations upon generations have been effected by the outcome of that deadly shootout and my hope is that POWER’S WAR clarifies things somewhat for each of them.

What books on the Power Shootout have you read and which one did you enjoy the most?

I have read them all and can’t say that I have a favorite. Everyone of them is a piece to a puzzle that ultimately will never be solved. I know for a fact there is yet another book that will be released soon. Keep your eyes open for that!

When can we expect the film to be completed and distributed? ( a rough idea)

Distribution is a tough thing for an independently produced documentary. Right now our focus is on getting the film screened at as many events as we can handle over the next few months. We hope to have DVDs to sell at those events and then eventually on our site. We’ll announce things on the facebook page www.facebook.com/powerswar and our official site www.powerswar.com as soon as we have information.

Where can DVDs be purchased?

No official date yet, however we are working fast to have DVDs available for purchase at our screenings.

What stands out for you about the historical and social events of the time (1918, World War I, prohibition, etc.) that may have had an impact on the shooting and convictions of the Power brothers and Tom Sisson?

World War I was the unrelenting force behind the death of four men at Power Cabin. Without the war and the draft that came soon after, the Power family would have been allowed to live their lives the way they had always known, far from society and the rapidly progressing world around them. Jeff Power resisted participating in a war that he had no stake in. Despite his (Jeff) best efforts the war came to his own doorstep. Hence the title of my film, POWER’S WAR.

There is so much speculation around the why, the who, and the what with the Power Shootout. Literally everyone I interviewed outside of the historians had some theory about what had actually happened. In the end the deadly Power shootout was caused by the frenzy of patriotism surrounding the war.

What ever happened to Frank Haynes, Deputy US Marshal after the trial and convictions? Is that covered in the documentary?

We did not research Frank Haynes life following the shootout/trial. Haynes had no real stake in the conflict apart from fulfilling his duties as a federal lawman and therefore doesn’t provide any essential understanding of the why in the shootout. Haynes was interviewed by several newspapers following the shootout and we do know that some of the accounts he gave were inconsistent with each other.

Power’s War does not go into the life of Frank Haynes following the trial of Sisson and the Power boys.