Every 10 years, Pinal County is required to conduct a redistricting process that ensures each County Supervisor district has an equal number of residents per district. In the process, they must also consider the connectivity and congruent connection of the district.  The process must also avoid separating municipal communities and should try to avoid having incumbent candidates running against each other.

For many years, District One included eastern Pinal County, Eloy, Florence and Coolidge.  During the 2010 redistricting process two additional Supervisor districts were added to balance the number of residents per district.  Declining population in the Copper Corridor is affecting the ability to keep the mining communities of Superior, Kearny, Mammoth, San Manuel and Oracle together.  Collectively, this part of the Pinal County is known as the Copper Corridor.

Plan A proposes that Superior join a district with Apache Junction, Gold Canyon, Queen Valley, Top of the World and a small portion of unincorporated population north of the San Tan Valley Area.  This district would be known as District 5.  Kearny, Mammoth, Aravaipa, San Manuel, Mammoth and Oracle would remain in District 1 with this district also including Florence and Coolidge, along with all the unincorporated areas in between.  The communities south of Oracle including SaddleBrooke, Marana and Red Rock will remain in District 4.

Plan B proposes that Superior and Kearny join District 5, which would also include a small portion of prison population in Florence, Apache Junction, Queen Valley, Gold Canyon, Top of the World and a small area north of San Tan Valley.

Residents of Pinal County are urged to participate in the public comments.  There will be a public hearing in San Manuel on Thursday, Feb. 17, at the San Manuel Community Center from 6 to 7 p.m.  The community center is located at 111 W. 5th Avenue.  Following the community outreach events, the Pinal County Board of Supervisors will vote on a final redistricting map.  The Board of Supervisors are expected to vote on the final maps in early March.  The redistricting will not take affect until the next election in 2024. This will allow for voters to either vote for incumbent or another candidate.

If you are unable to attend the public meeting in San Manuel or one of the other meetings held throughout the County, you can also go online to make your own comment or make your own map preference: https://bit.ly/3sD6Mzb. 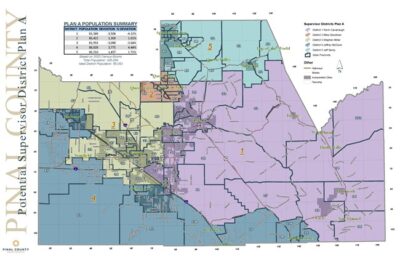