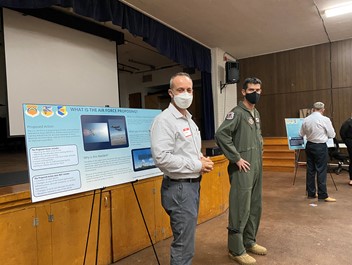 The Copper Corridor region is used to playing a large role in the practice and training of both US and Arizona air troops.  It is not uncommon to see several Air Force jets flying in formation or hearing the jets whiz by over your head on a walk or even an occasional and accidental sonic boom will rock your house.  Authorities believe that the Telegraph and Mescal forest fires this summer may have been started by flares that did not extinguish before hitting the ground.

Leaders and land managers that are in the Outlaw, Jackal, Morenci and Reserve Military Operations Areas (MOAs) were notified that the Air Force had filed an Environmental Impact Statement that was subsequently published in the Federal Register.  An Environmental Impact Statement is a series of studies and public comment period which helps to evaluate if the requested actions by a company or government entity would affect public lands, animals, or humans.

On Tuesday, Feb. 8, the Air Force hosted a public meeting at the Superior Town Hall, one of  seven public hearings that is designed to help the public better understand the process, learn about what the Air Force is requesting and also allow the public to comment on the proposed plans.  Comments must be received by March 4.

The majority of the Copper Corridor is affected by these plans as the communities of Superior, Miami, Globe, Kearny and Mammoth are located within the Outlaw MOA, with San Manuel and Oracle just outside of the Outlaw district.  The Jackal MOA also covers the mountains and canyons such as the Aravaipa Canyon all the way to Safford.

In the scoping document for the EIS, the Air Force explains that in order to continue to train properly they need to utilize existing military air space more aggressively, as other air spaces are more congested.  This will also allow airmen to train and practice closer to their home bases.  The air spaces are used primarily by Davis Monthan Air Force Base, Luke Air Force Base and Morris ANGB.

According to their website, the MOAs that are currently used for Air Force training in Arizona, specifically low altitude airspace and airspace that supports supersonic operations at low altitude, have become saturated with aircraft. While the Air Force manages an extensive network of valuable SUA in the region, including the restricted areas associated with the Barry M. Goldwater Range, the volume and attributes associated with the individual MOA are insufficient to meet the current training requirements. The Air Force is proposing a regional approach that aims at optimizing the existing training airspace to meet current and future mission requirements of multiple users. The airspace proposed for optimization includes the following MOAs: Tombstone, Outlaw, Jackal, Reserve, Morenci, Bagdad, Gladden, Sells, Ruby, and Fuzzy. These MOAs overlie land located throughout southern Arizona and a small portion of western New Mexico.

Specifically for the Outlaw and Jackal MOAs, their requested changes would include: flights being operated from 6 a.m. to 10 p.m. Monday through Friday.  Currently they are allowed to fly until 6 p.m. and from 6 to 10 p.m. but only with certain permissions via NOTEM.  They are also requesting to drop flares at 500 feet in elevation.  They are also requesting permission to lower the elevation where flares can be released and also lower the elevation of supersonic flying.

You can learn more about the specific elevation changes and see maps of the air spaces online at:www.ArizonaRegionalAirspaceEIS.com

Comments can be made online: https://bit.ly/AirForceEISComments and must be made by March 4, 2022.  You can mail comments directly to: Arizona Airspace, c/o Cardno  501 Butler Farm Rd. Suite H Hampton, Virginia 23666.  There are also three additional public hearings: Feb. 22 in Reserve, New Mexico, at Village Hall; Feb. 23 in Morenci at the Clifton Community Center; and on Feb. 24 in Animas, New Mexico at the Animas High School.  All of these hearings are scheduled from 5 to 7 p.m.

Once the public scoping period is over, comments will be categorized and the concerns will be studied and evaluated by a private organization that specializes in these type of studies.  Once the study is complete, a Draft Environmental Impact Statement will be released and there will be an additional review and comment period.  Once those comments are reviewed a Final EIS will be released and a Record of Decision will be signed.  It is not expected that this process will be complete until 2024. 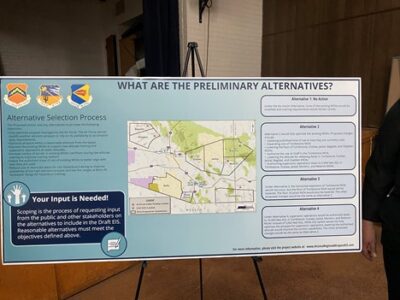