The year 1964 was a contract year for the unions at Magma. In January the Magma Unity Council of the International Union of Mine Mill and Smelter Workers met at the Catholic Church Hall in San Manuel. The Council was made up of representatives from San Manuel Local 937 and Superior Local 938. Officers of the Council were Reid Moss, Chairman from Superior, Ed Lomeli, Secretary of San Manuel Local 937, and International Representative Charles Wilson, Council Coordinator. The Council was holding a series of planning meetings in preparation for negotiations with Magma. The contract was set to expire July 1.

Nick Mirich, Underground Shift Foreman was presented with the Mine Superintendent’s Award for Safety at the annual Safety Award Dinner held at the Linda Vista Guest Ranch in Oracle. Mirich and his shift supervisors won the award for the third time in the past four years.

On April 8, the Mine Mill Unity Council representing 12 labor unions presented their proposals to Magma officials. Job security appeared to be the main bargaining issue with a substantial wage increase being asked for as well as health and welfare benefits. Frank Vetterol, Mine Mill State Council Coordinator pointed out that 1,200 jobs were lost nationwide in the copper industry during the past five years while wages have risen only slightly compared to increased production and profits for the company.

“Automation is destroying every job we have today,” Vetterol said. Vetterol quoted figures from the Magma Copper Company’s Annual Report showing that Magma had made a profit of $10 million during 1963.

April 15 brought news from the National Labor Relations Board that an election date was being set for April 28 to determine once again which union, Mine Mill or Steelworkers would represent Magma employees. The Steelworkers had filed a petition earlier in the year seeking the election. Linus Wampler, representative of the local Steelworkers said he had 900 men signed up for the union. Wampler also challenged Mine Mill to a public debate to be held on April 23 at the San Manuel High School cafeteria. Wampler said he wanted the debate “in order to clear up the real issues in the campaign and to give Magma employees a clear choice of unions.”

Mine Mill Executive Board Member Maclovio Barraza wrote a letter to Linus Wampler on April 20.  A full page copy of the letter was printed in the Miner newspaper. Parts of the letter follow:

“Mine Mill and the other unions (12 local unions) have been working hard for weeks and months in drafting joint proposals and have already proposed them to Magma Copper Company, hoping to reach an agreement as soon as you and your disrupters are gone.

“We have no time to play tricky games with the security and welfare of the San Manuel workers.

“You were not around when Mine Mill and the other AFL-CIO unions joined with the people of the Tri-Community in defeating the exorbitant water increases and circulated petitions for the income tax cut that we now enjoy.

“You and your organization were busy disrupting San Manuel workers while Mine Mill and other unions were in Phoenix hammering out a new safety regulation for underground mining. You and your steel union were absent while Mine Mill and the AFL-CIO was in the fight for safety laws to cover mills, smelters and craftsmen of our industry in Arizona.

“You have used trickery and have been very dishonest with the San Manuel workers. If your boasts were true, you would need no debate. You should tell them how desperate you are and why you must use gimmicks and red-baiting smears, hoping to confuse the real issue in this campaign.

“You have betrayed the workers in this industry when you sold yourself to the cause of disrupting local unions across the country.

“I certainly did not think you would stoop so low as to attempt to involve the Catholic Church or any Church organization into this election.

“The sooner you are gone from the area, the sooner the workers can unite behind the contract bargaining program.”

Maclovio was a miner following in his father’s and grandfather’s footsteps. He was a native of Superior, Arizona and would become a Hispanic rights and union activist, first with Mine Mill and then with the Steelworkers. He was the founding Chairman of the Southwest Council of La Raza which would later become the National Council of La Raza. He helped found the Mexican American Legal Defense Fund and the Southwest Voter Registration and Education Project. He died in 1980 while working for the Steelworkers to negotiate a contract with Magma.

On April 28, shouts of “Viva Mine Mill, Viva Mine Mill” filled the Community Center when it was announced that Mine Mill had defeated the Steelworkers in a landslide by a vote of 623 to 473.

In May at the Magma Mine in Superior, Louis Bunch, a General Foreman, was killed when a 6 by 12 foot section of slab rock collapsed on top of him. Louie was the father of San Manuel elementary school teacher and high school athletic coach John Bunch. Louis was a 30 year veteran at the mine and was 59 years old.

It was reported in early June that the company had heard all of the union’s proposals and that Magma was seeking a three year contract. Towards the end of June, the Mine Mill Unity Council was preparing to meet in Superior to set a date for a strike vote. A few days later, it was announced that Magma had offered a 27 cents pay boost package. Mine Mill representatives said, “The monetary offer made by the Company is much less than previous economic settlements made since 1959. Even though the company made and is now making the highest profits in its history, it refuses to recognize the needs of its employees.”

In July, 96 percent of Mine Mill members approved a strike if one was needed. They agreed to work day by day while negotiations continued. In the Ray-Kearny-Hayden area the Steelworkers struck at Kennecott: 1,400 workers walking off the job. In August, 30 days after the contract expired, the Steelworkers were still on strike at Kennecott. In San Manuel, a 4,000 horsepower motor, which drives the generator necessary to run one of the hoists at the mine broke down, forcing the company to temporarily lay off all summer help at the mine and 100 workers to take early vacations. The breakdown cut production at the mine in half.

At the same time the Mine Mill Union at Hayden and the American Smelting and Refining Company (AS&R) came to an agreement on a three year contract. The contract called for a pay increase of 38 cents hourly over three years and one extra paid holiday. The contract still had to be ratified by the Mine Mill members. Mine Mill at San Manuel was still in negotiations but the news gave hope that a settlement was near and a strike would be avoided.

Also in August, the U.S. Congress passed the Gulf of Tonkin Resolution which allowed President Lyndon B. Johnson to escalate the war in Vietnam and send additional troops to be used in combat operations and not just in an advisory capacity. Troop levels climbed from 23,000 to 185,000 by the end of 1965. Johnson would raise the troop levels the next two years until in 1967 there were 485,000 Americans fighting in Vietnam. The escalation of the war would have a direct effect on the copper mining industry. It created a demand growth and stockpile releases. The continued high war demand for copper would continue until the war’s end.

In September, the Miner announced that a settlement had been reached with Magma and the Mine Mill Unity Council. Kennecott had come to an agreement with the Steelworkers after 60 days plus of a strike. The Miner reported that “life in the copper mining towns should get back to normal shortly, at least for the next three years.”

An article in the Miner showed that Magma Copper was the second largest producer of copper in Arizona in 1963. Phelps Dodge was the number one producer. The state of Arizona produced 54.5% of the nation’s copper. In 1963, the average weekly wages received by copper mining employees was $140.23. In 1953 it was $99.98.

At the start of 1965 Magma Copper Company reported a net income of $17,375,738 for the year 1964. This was an increase of more than seven million dollars over the preceding year. Magma stock was selling for $46 per share and paying a quarterly dividend of .35 a share. The copper industry in Arizona paid $25 million in state taxes in 1964.

A new Plant expansion was completed in July adding two new sections in the concentrator and two additional crushers that began operating in August. The plant expansion allowed for an increase in processed ore of 40,000 tons more per day.

The San Manuel Miner posted a full page ad/article titled “What’s Wrong With Civil Rights?” The article was written by members of the John Birch Society. The summary of the article was that the Civil Rights movement was a Communist conspiracy. One quote from the article said, “The environment for life, liberty and the pursuit of happiness, enjoyed by the American Negro, has been far superior to that of any race or any people, among at least 90% percent of the earth’s population.” Another article appeared announcing that Mr. Peter Lombardo, State Coordinator of the John Birch Society would be speaking at the Community Center in San Manuel on Oct. 14. The meeting was free and would include a film about the John Birch Society and their fight against the communist conspiracy.

Part 2 will be published in next month’s Pinal Nugget. 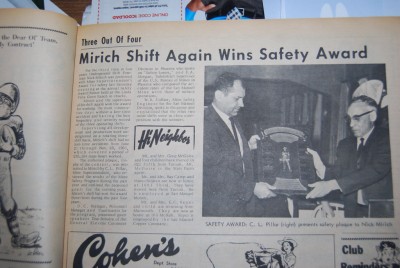 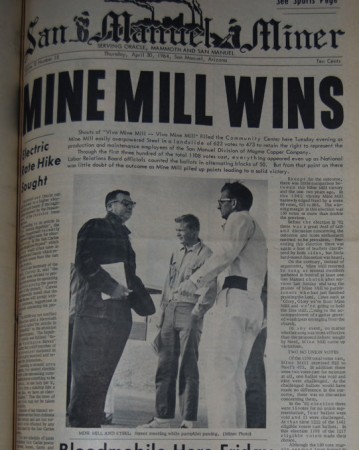