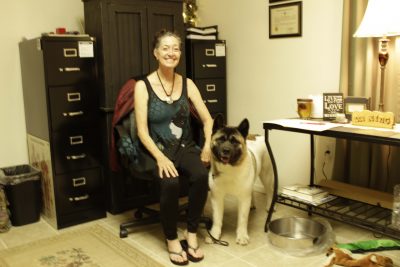 Superior has a new chiropractor in town. Dr. Susan King has opened an office in Pam Peck’s real estate facility on N. Magma Street. Dr. King’s office is open on Tuesdays and Thursdays 2 to 7 p.m. The new Superior location is not Dr. King’s primary office; she has been working out of her main office in Apache Junction for 22 years. For the past 10 years she worked two days a week in the Town of Kearny, but recently the building that housed her practice in Kearny was sold and she went looking for a new location.  She decided to open a new business in Superior in May of this year.

Dr. King has been a practicing chiropractor and licensed in the State of Arizona since 1989. She went to Palmer College of Chiropractor in Davenport, Iowa.

She does full chiropractic and she has a couple techniques she uses: she has a Thomas full drop table and she also uses an activator tool which is less invasive for those people that don’t like the force of the table.  She does not do “twist and crank” on her patients.  “It’s too traumatic, too many things can happen,” King explained. “It can be done improperly, and it you can hurt soft structure; no sense in inducing pain when people come in pain.” 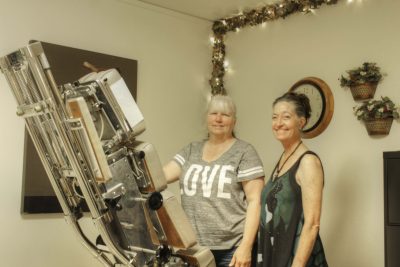 Dr. King with a patient and the Thomas full drop table.

“I like to be known as a person,” she said. “I like people to know who I am, rather than just know me as a professional in health care.”

As a new patient, you can expect to have a one-on-one interview with Dr. King. She likes to tailor her treatment specifically for each patient which means she takes thorough history of each new patient’s medical history, medications they might take, and any surgeries they might have had.

Dr. King comes with a companion. When you visit her, you will also meet her dog Lovey, a pure breed, two-year-old Akita. Lovey is being trained as a therapy dog. Dr. King hopes one day to be able to use Lovey for children wards at hospitals, hospice, and nursing homes. Anywhere she says, “where therapy dogs will bring joy and contentment.”

Sometimes Lovely is not the only animal in the office. Dr. King does adjust animals. She has an active dog and cat adjusting practice. She says the animals “need care just like we do.” According to Dr. King, little dogs like to jump a lot and may have back issues and larger dogs can have some hip issues that need to be addressed. Though she asks that if you have an animal that needs to be seen that you don’t bring them into straight into the office, but instead you call first and make an appointment for them.

Dr. King is excited about being in town and she hopes to be practicing in Superior for a long time.