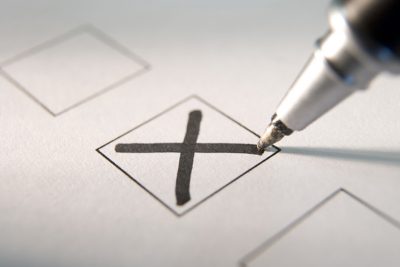 The voters have spoken.

Pinal County voters spoke on Aug. 30 in the Arizona Primary Election, and their words were anything but pleasant for County Attorney Lando Voyles, District 2 Supervisor Cheryl Chase, Superior Mayor Jayme Valenzuela and Kearny Mayor Sam Hosler. All four saw their terms of office cut short at the ballot box.

And while the Town Councils of Kearny, Mammoth and Superior will see plenty of new faces as a result of the Aug. 30 election, on the county level voters mostly re-nominated incumbents to represent their parties on the Nov. 8 ballot.

One trend from the primary election is that the political muscle of two-term Pinal County Sheriff Paul Babeu may be on the wane. While he won the Republican nomination over five other candidates in the First Congressional District with 32.5% of the vote, the candidates Babeu endorsed did not fare as well.

Henry and Voyles ran an extensive campaign as the “Law and Order Team,” blanketing county roads with groups of signs touting the criminal threats to the county before reaching their joint poster in a manner reminiscent of the Burma Shave advertising campaign of yore. But voters opted for the quitter separate campaigns of Lamb and Volkmer. Lamb did especially well among voters in San Tan Valley where his campaign signs were not seen before homes on subdivision streets.

Lamb will face Kaye Dickson, who convincingly won the Democrat nomination for Sheriff over Kevin Taylor. Dickson campaigned hard on programs to prevent crime and promises to be a working rather than a showboat sheriff.

Babeu will face Democrat Tom O’Halleran to succeed U.S. Senate candidate Ann Kirkpatrick as Congressman in Arizona’s First District, which stretches from southern Pinal County to the far northeast corner of the state. Although O’Halleran won the Democrat nomination by more than 7,000 votes throughout the district, his opponent Miguel Olivas topped him by 400 votes in Pinal County.

Among incumbent members of the Pinal County Board of Supervisors, only Cheryl Chase was not renominated by voters. Mike Goodman, a San Tan Valley resident and owner of several local businesses, finished first in a field of five candidates in the Republican Primary with 1,726 votes (33.8% of the total votes cast). Chase placed second with 1,390 (27.1%), followed by Tisha Castillo, Wayne Bachmann and Manuel R. Vega.

Goodman’s win was credited to his hard personal campaigning especially in San Tan Valley, where he promised to help bring more jobs and services. Also a supporter of San Tan Valley incorporation, Goodman will face no opposition in November as there is no official Democrat candidate slated.

The local race that had everyone watching was the Recall Election for Mayor of Superior. Incumbent Mayor Jayme Valenzuela was easily ejected from office by Town Council member Mila Besich-Lira, who received 516 votes to Valenzuela’s 151 votes. The recall election was called in April as nearly double the necessary citizen signatures were secured in response to the discovery last December that Valenzuela had used the town debit eight times for personal matters, including a visit to the Wild Horse Pass Casino.

Besich-Lira will assume the position of Mayor of Superior at the Sept. 8 Town Council Meeting.

There also will be turnover on the Town Councils of Kearny and Mammoth.

Debra Sommers nosed out incumbent Sam Hosler at Kearny Mayor by only 29 votes. However, the race was close and Sommers getting just under 50% of the vote, a runoff election could be staged in November. Whether a runoff is needed will be determined when the official election results are issued on Sept. 7, said Kearny Town Clerk Cathy Woolery.

On the Town Council, only Sheila Stephenson was reelected to a new terms. Securing the most votes for Council seats were Rose Bradford and Samantha Mista. Failing to win reelection was David Herrera.

In Mammoth, only Mayor Frances Wickham was reelected to the Town Council on Aug. 30. New Council members, all of whom received more votes than Wickham, were Alvaro Anaya, Joe Dietz and Frances Amparno. Council incumbents not reelected were Vice Mayor Joe Brewer and Bob Sloan, as was Bart Goff. In Mammoth, voters elect the Council but Council members vote among themselves as to who serves as Mayor and Vice Mayor.

Other Pinal County races decided on August 30 include only one contested race where for County Accessor incumbent Republican Douglas Wolf will face Democrat Jacqueline Minto. For the other positions Republicans will run unopposed, which are Recorder Virginia Ross, Superintendent of Schools Jill Broussard and Treasurer Michael McCord.

*Unofficial Results of the August 30 Elections:

*Results are unofficial until canvassed by the board-council governing them.