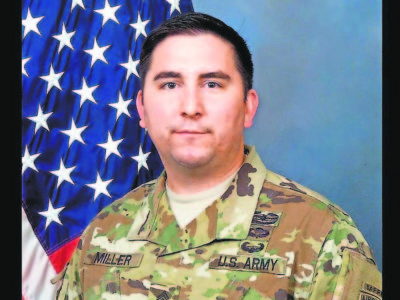 Some of you may remember the man in the picture to be the same boy that delivered this very newspaper almost two decades ago.

“I always considered my first job as delivering the Copper Basin newspaper to nearly half the town,” said Command Sergeant Major Raymond Miller. “It’s not that enjoyed it, but it was because my father didn’t give me a choice.”

Before departing Kearny in 2000 to join the Army, Raymond Miller spent his entire life in the local mining town. Born in the Kearny Hospital in the late 1980s, he never imagined that his life choices would lead him into a career field that would offer so much.

Miller, at the age of 19, enlisted into the United States Army as a Combat Engineer, fulfilling a lifelong promise to his father. At the time of his enlistment, Miller assumed the rank of Private, or E-1, which is the lowest and most common enlisted grade of new recruits. After 18 years of military service, including several combat tours to the Middle East, he has now achieved the pinnacle of his career. 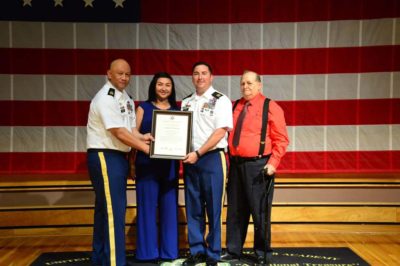 Earlier this week, Miller was appointed to Command Sergeant Major (CSM), or E-9, which is the highest enlisted rank in the military. Upon his graduation from the prestigious United States Army Sergeants Major Academy in Fort Bliss, Texas, CSM Miller will assume the responsibility of the 4th Engineer Battalion at Fort Carson, Colorado.

“I just really want the people of my hometown to understand, and more importantly the youth of the town to understand, that the military has offered so many unique opportunities for me and my family,” said Miller. “I would have never thought that a small town kid from Kearny could ever be afforded the opportunities I’ve had in my life. I owe it all to the Army and my family’s support.”

Command Sergeant Major Miller is a decorated combat veteran and his awards include the Bronze Star Medal, Purple Heart, and an Army Commendation Medal with Valor to name a few. He is also a graduate of the coveted Sapper Leader Course. His previous assignments include tours with the 10th Mountain Division, 2nd Infantry Division, 1st Armored Division, and various Special Operations assignments throughout the world.

“I’m very proud of where I come from. My town and the people that helped raise me mean everything to me,” said Miller, “I always reflect on my past when making decisions about my future the future of the Army.”

Command Sergeant Major Miller is the son of Dick J. Miller Jr. of Globe and the late Gloria I. Miller. His brother Vaughn is still serving in the Navy after 20 meritorious years. His sister Pamela, also a veteran, lives in Tucson. Miller also stated that he considers several families of the Copper Basin Area as “extended families” which he communicates with on a weekly basis despite his rigorous schedule.

Raymond is married to his wife Yulia of 14 years, and they have two children ages 13 and 3.