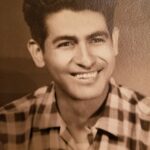 It is with sadness that the family of Jose Valentin announce his passing on Dec. 14, 2021. Jose, 91, passed away peacefully at the Park Avenue Health and Rehabilitation Center in Tucson, Arizona.  He was a native Arizonan, born on March 23, 1930, and raised in Hayden, Arizona and resided there until moving to Nogales, Arizona. He was long-time resident of Nogales, Arizona.  He will be missed by his family.

Following graduation from Hayden High School he joined the Army where he was stationed in Germany, served in Company C 169th Infantry, and was honorably discharged.  Following his discharge from the Army he attended and graduated from Art school in Portland, OR.  He returned to Hayden and later moved to Nogales with this sister, Jessie, and parents.