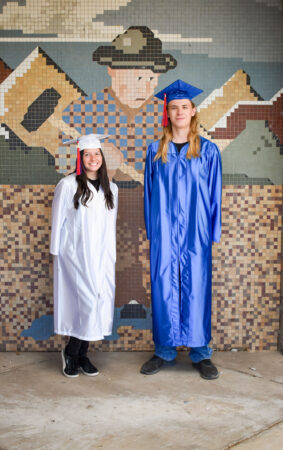 As the school year comes to an end, and summer approaches, most students are expecting a normal summer break. But for San Manuel High School’s Class of 2022 it will be the first summer of the rest of their life. San Manuel’s graduation ceremony is scheduled to take place May 19.

Braydon LeGrand will be the San Manuel High School Valedictorian for the class of 2022. Braydon was a member in the AP Club. He received all As throughout his four years in high school, earning him the Principal Award. Braydon was one of the top two scholars of AP Government, and was rewarded a Stocking Senior Scholar award for it, along with an AP Government Excellence award. In sign-language II, Braydon carried the highest GPA, earning him an Academic Excellence award. He also received the Exceptional AP English Award.

Braydon will attend college in pursuit of a business degree. He hopes to one day to be successful enough to live comfortably.

Although Braydon can’t recall any of his best memories of high school, one thing he says he will miss is the simplicity. A word of advice we has for those just starting high school is, “Realize what is happening while it is happening, because it goes by fast, and once it’s over, it’s over.”

San Manuel High School’s Class of 2022 Salutatorian will be Daniella Kotopoulous. Daniella was President of National Honor Society, AP Club Vice President, and Student Body Vice President both her junior and senior year. She also volunteered for the Year Book Club, and participated in Youth Coalition Group. Daniella was also on the Cheer team since her sophomore year, being co-captain her junior year, and captain her senior year. She also helped the baseball team this year as their manager. Throughout her high school years, Daniella participated in HOBY Leadership Conference and Arizona Girls State.

Once graduated, Daniella has plans to attend the University of Arizona. She has her sights set on becoming a high school or junior high English teacher. She has also given some thought to dabbling in psychology or theater-based endeavors. Daniella has hopes for a future full of happiness.

“Two of my favorite high school memories were going to Bullhead City for Football, and

the time after our first baseball away game, where Coach Barney and Coach Sapo drove me in the

van to a McDonalds so I could get a chocolate milkshake because I was craving one, and gave me

the nickname ‘Three Straws’,” Daniella reminisced, “I will forever remember and miss cheering for intense basketball games, singing the national anthem before games, doing routines in cheer, and managing baseball.”

Some advice Daniella would like to give to the upcoming freshman class is, “Take your freshman year seriously and start packing on leadership roles and community service right away if you want to make a mean resume your senior year. Anything you participate in or do, keep an updated list. Be nice to everybody but don’t let yourself get trampled. Always be thankful and if you’re ever busy, I recommend printing out customized calendars. Learn how to manage time and good luck!!”