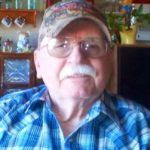 Carl Hudson Sr. was born July 6, 1939 in Electra, TX. He died March 29, 2019 in Cottonwood, after a long battle with cancer. He was the last of eight children of Ernest and Emma Hudson.

Carl was preceded in death by his parents; brothers, Russell, Ronald, Valton, Hugh and Cloyce; twin sisters, Geraldine and Madeleine; and, his son, William.

He is survived by his wife, Velma; children, Carl “Shorty” Jr  (Kelly) of Boerne, TX, Thomas (Becky) of Dewey, and Veanna (Ty) of Page Springs; six grandchildren, Alayna and Matthew of Boerne; Brook and Ethan of Page Springs, and Trena and Jesse of Dewey; sisters-in-law, Mary Lou Hudson, Earla Hudson, Janet Huber, and, many nieces and nephews.

He joined the Navy in 1957, served his entire tour on the USS Midway. After the Navy, he worked for Chevron, Bethlehem Steel and in the Oil Field in Texas before ending up in San Manuel, living with  his brother, Valton and his family. Here, he worked for 34  years for Magma/BHP, where he started as a car loader; later becoming a supervisor in mechanical department underground.

His brother, Val and future brothers-in-law, Jack Huber and Vic Clark all worked together and introduced him to Velma Clark of Tucson. They eloped and were married in Las Vegas Nov. 10, 1965. They were married for 53 years. He and Velma left San Manuel in 2005 to live in Pine (where they had a cabin) for 25 years. They enjoyed living there full time, enjoying the mountains, snow and the elk that roamed the property. Health issues forced them to move to Cottonwood in 2012 to be closer to their children.

Carl was a friendly guy who loved people and couldn’t go anywhere without seeing someone he knew or have just made a new friend. He liked to make furniture. He started with crib beds that he made for his daughter and, later, grandkids. He made end tables, coffee tables and TV units. He made many beds, mostly western design.

Services for Mr. Hudson will be held at the Community Presbyterian Church, 801 S. McNab Pkwy. in San Manuel on Saturday, April 6, at 11 a.m. In lieu of flowers, donations can be made to St. Jude Hospital.