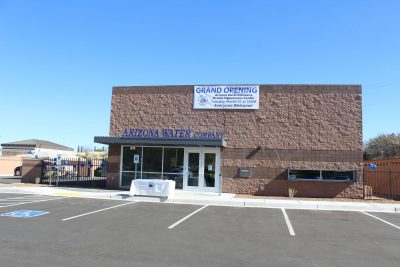 The new Oracle Operations Center for the Arizona Water Company.

Residents along the Copper Corridor served by the Arizona Water Co. (AWC) could see a substantial increase in their water bills next year if the Arizona Corporation Commission (ACC) signs off on a request recently filed by AWC.

A proposal (Docket No. W-01445A-16-0443) AWC filed on Dec. 6, 2016 asks for a general rate increase of from 21% to 37% for its customers in northern and eastern Pinal County and in Cochise County. The proposal is currently in the consumer comment stage, with oral testimony scheduled for mid-July and hearings before all ACC commissioners in late September. AWC asks that the rate hikes go into effect on Jan. 1, 2018.

Water bill increases would differ among Copper Corridor towns, according to Joel Reiker, AWC vice president of rates and revenue.

“The leading reason results from AWC’s investment in its infrastructure since the last rate hike in 2010 including replacements and improvements in its water utility plants and the need for continued replacements of aging equipment and delivery systems,” Reiker said.

In its petition, AWC also cites rising operation and maintenance expenses, increased capital costs, and increased income and property taxes above amounts currently reflected in its rates. AWC further cites the increased cost of delivering renewable water supplies to customers through the Central Arizona Project, which brings water from the Colorado River through 336 miles of aqueducts to communities in Pinal County and surrounding areas.

Water rates in those four town will not rise until ACC votes to allow them, and the process is long and arduous. As soon as AWC filed for a general rate increase, ACC officers demanded documents verifying the need for the increase. Those documents can be read in the Utilities Section of the ACC website. Some are lengthy and may take several minutes to download.

The proposal moved into the Public Comment period in early March. Interested parties can still file comments through the end of April here or by filling out a Public Comment Form here. All comments should note the Docket No. W-01445A-16-0443 so it is directed to the proposed case.

ACC has tentatively set live testimony on the AWC rate increase for July 17 to July 24, 2017. Rebuttals on Testimony are set for Aug. 14, Subrebuttals on Sept. 5, and Rejoinders on Sept. 15. Following a Prehearing Conference on Sept. 15, a Full Hearing before ACC commissioners is set for Sept. 18 to Sept. 22.

ACC hearings are usually held at ACC headquarters at 1200 W. Washington in Phoenix.

As the entire process for ACC considering utility rate increases can take anywhere from 12 to 18 months from filing to ruling, Reiker admits that the AWC general rate increase may not occur next January 1 as planned but later in early 2018.

There were some questions about AWC needing a general rate increase to cover rising costs when it just opened a new Operations Center in Oracle. However, an AWC spokesman noted that the modern new facility in Oracle will help trim operating costs in the future while enabling the utility to better serve customers in the area, especially around SaddleBrooke Ranch where water demand is rising.