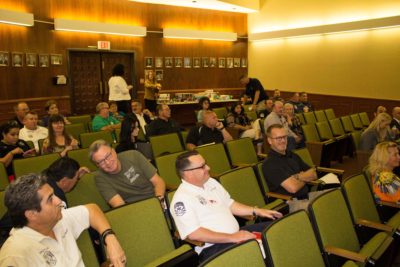 Old firefighters never die. They just burn forever in the hearts of the people whose lives they saved.

But what happens when they want to retire?

That is the question that the Arizona State Legislature is trying to answer. An Ad Hoc Study Committee on the Public Safety Personnel Retirement System has been traveling throughout the state asking city and town officials their opinions.

The statewide Public Safety Personnel Retirement system is critically underfunded and the cost of this unfunded liability has been passed onto the cities and towns in the form of extremely high pension payments. For the smaller towns this has created an extreme challenge coming up with the pension payments. For example, Globe unfunded liability is $10.8 million, forcing them to pay 60 cents on the dollar for every police officer.

Mayor Al Grameros and Manager Paul Jepson from Globe focused on the difficulties their city has had working through solutions to the problem. Globe has been very proactive, creating a plan to pay down the liability and making a significant payment toward the plan, but the PSPRS structure has been difficult to work with, having few tools to help cities navigate through the problem.

Miami Town Manager Joseph Heatherly focused on the numbers, breaking down the problems with the poor performance of the fund compared to other funds of the same type, and how this affected his town’s liability. He also stated that his town is facing significant challenges, with a shrinking population and failing infrastructure, and the town of Miami does not have the money to pay the high PSPRS rates and reimbursements.

Superior Town Manager Todd Pryor discussed how these numbers affect the communities they serve, as well as the police and fire personnel in each of the communities. The small towns retirement benefits are too low to actually allow personnel to live on their retirement benefits, forcing the members to work longer and leave the small towns for greener pastures at high rates. The high cost of employment created by the ever-rising costs of medical insurance and retirement programs increases costs to not only the town, but to employees themselves. Mr. Pryor also discussed how these out of control costs will limit the Cities’ and Towns’ ability to grow and improve.

The committee thanked the local executives for their testimony and mentioned of the four meetings they have held so far this was by far the most informative meeting.