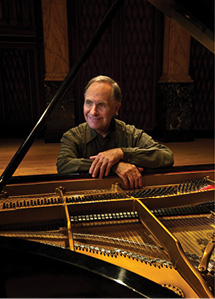 Pictured is James Dick who will perform Beethoven’s Piano Concerto No. 5 in E-flat major, known as the Emperor Concerto, on Oct. 6 and 7 with the Southern Arizona Symphony Orchestra. Following recitals in St. Petersburg, Russia and New York’s Carnegie Hall, the New York Times reported this is “modern piano playing at its best.”

TUCSON, Ariz. – The 2012-2013 season Southern Arizona Symphony Orchestra includes two world premieres by Tucson artists. They are “Running the Rim” by Jay Vosk and “Landscapes” by Peter Fine. There’s also a sneak preview of the aria “If Life Were as it Seems” from the opera “Rappaccini’s Daughter” by Richard White.

Two other works by local composers are “Walk Without Fear” by Brian Goodall and “Open Spaces Suite” by Bruce Stoller.

These pieces will be recorded for possible inclusion in the orchestra’s first professional CD release, which will highlight Tucson’s talented composers.

Founded in 1979, SASO presents five concert programs a year with two performances each – Sat. nights at 7:30 p.m. at the DesertView Performing Arts Center, 39900 S. Clubhouse Dr. in SaddleBrooke, and Sun. afternoons at 3:00 p.m. at St. Andrew’s Presbyterian Church at 7575 N. Paseo del Norte. Season tickets are $75, a savings of $25 over single ticket admission. At the St. Andrews concerts, tickets are always complimentary for ages 17 and under

The season opens Oct. 6 and 7 with the Vosk premiere, followed by Beethoven’s Piano Concerto No. 5 in E-flat major, known as the Emperor Concerto, with soloist James Dick, plus Tchaikovsky’s Symphony No. 5 in E minor.

Vosk is a former New Yorker and graduate of the Eastman School of Music. He has composed more than 75 works and has called Tucson home since 1980. He was recently commissioned to write a piece for the National Symphony Orchestra.

The second SASO program will be on Nov. 17 and 18, featuring de Falla’s El Amor Brujo: Ballet Suite with mezzo-soprano Kristin Dauphinais, a member of the voice faculty at the University of Arizona, plus Sibelius’ The Oceanides and Debussy’s La Mer. Guest conductor is Orhan Saliel, who is considered Turkey’s most outstanding young conductor and composer.

Composer Goodall was commissioned to write “Walk Without Fear” following the tragic shootings in Tucson on Jan. 8, 2011 where six died and 13 others were injured. The work premiered the weekend of the first anniversary events. His compositions over the past 18 years are written for full orchestra, string ensembles, voice and film.

On Feb. 23 and 24 SASO will present one aria from the opera Rappaccini’s Daughter by composer White and librettist Terry Quinn with soprano Christi Amonson and a female quartet. Born in Brooklyn, White’s musical output spans every facet of composition. He was greatly influenced by American composer Elie Siegmeister with whom he worked for nearly a decade. The program also includes Hindemith’s Der Schwanendreher with violist Hong-Mei Xiao, who is on the UA music faculty, plus Mahler’s Symphony No.4 in G major with Amonson as soloist.

Strauss is one of the last “disciples” of renowned French flutist Jean-Pierre Rampal, who called Strauss “an authentic Latin representative of the French school of flute playing.” This program also will feature the winner of the SASO Youth Competition.

The SASO season concludes May 18 and 19 with the premiere of Fine’s symphonic work inspired by a 2011 trip through Rocky Mountain National Park. Also a guitarist and sitar player, he wrote Concerto for Electric Guitar which premiered in 1999. The program also features Saint-Saens’ Violin Concerto No. 3 in B minor with Chilean soloist Francisca Mendoza and Rachmaninoff’s Symphony No. 2 in E minor.

Music Director Linus Lerner will conduct four of this year’s programs. Lerner, who completed his doctorate in orchestral conducting at the University of Arizona, also serves as artistic director of the Bayou City Performing Arts in Houston. He’s conducted orchestras, operas, choruses and instrumental groups in his native Brazil, the United States, Spain, Bulgaria, the Czech Republic, Turkey, Australia and China.