In 1846 General Stephen Watts Kearny and the Army of the West, which included the Mormon Battalion, passed through the area along the Gila River we now know as the Ray Mine, Hayden-Winkelman and the town that bears his name Kearny. 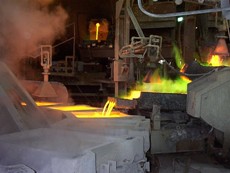 They camped in the area where a creek fed the Gila River. Lieutenant William H. Emory named the small flowing water Mineral Creek because of the geological signs that there were minerals in the area. After Camp Grant was built and United States Army troops began regularly patrolling the area, Mineral Creek and the area around this part of the Gila River would lure prospectors searching for gold and silver.

Although some silver and gold was found in the area, it would be copper that would drive the mining investments in the area.

Butte City about eleven miles below Kelvin would be the site of a smelter for these ores. The smelter was shut down in 1882 due to lack of fuel.

Five beehive shaped kilns were then built along the Gila River to make charcoal from the trees along the surrounding hills. The now ghost town of Cochran was located across the river from the kilns in 1905.

The fuel would allow the company to produce two million pounds of lead and silver during the first six months of 1883. Litigation problems would lead to the mine and smelter closing leaving Butte City a ghost town.

he community of Skinnerville would start up about five miles from Ray. It would be renamed Troy in 1904. The smelter there produced copper although it would be a ghost town by 1910.

A British corporation, the Globe Exploration Company, Ltd. Arrived in the Ray area in 1898. The company based in London acquired many of the mining claims around Mineral Creek and the surrounding areas. In 1899 the Ray Copper Mines, Inc. took over the operations.

The company founded the town of Kelvin, named after British Lord Kelvin. A mill, narrow gauge railroad, office buildings and shops were constructed at Kelvin. The railway linked the mine and mill.

Ore had to be transported by wagon to the nearest Southern Pacific Railroad at the town of Red Rock, which was sixty miles away. Kelvin’s population peaked at around 1,000 during this time.

Mexican and Mexican-American workers went on strike in 1901 and 1902. The workers asked for an eight-hour workday and wanted pay increased to $3 per day. The mining operation failed within three years and the British investors pulled out.

In 1910 the companies merged to form the Ray Consolidated Copper Company (Ray Con). Louis S. Cates was placed in charge of operations. Cates would develop the block caving method of underground mining at the Ray Mine.

The company was part of the Guggenheim conglomerate and acquired more mining properties surrounding the area, which allowed them to dominate the mining industry in the area until 1926. During this period the town of Hayden was built near the water supply of the Gila River in 1909.

“Arizona’s First World War-era labor activism began with a series of incidents at Ray” according to labor historian Mellinger. Between 1,000 and 1,500 workers walked of the job slowing down production in 1915.

It was said that an anti-Mexican social climate perpetuated by Ray Con led to the labor strife. The strike was settled within a month and America’s entry into World War I stifled the national labor movement for many years to come.

After World War I, operations were cut back and eventually shutdown in 1921. Many workers moved away from the area.

Then the Great Depression hit.

The smelter operations were shut down in 1931 followed by the closing of the mine in 1933. That same year Kennecott Copper Company purchased the Nevada Consolidated Copper Company holdings. The mine was reopened in 1937 and many workers returned to the area as well as new employees.

Open pit mining began developing in 1952 leading to the closing of underground operations in 1955. The rise of open pit mining would eventually lead to the destruction of the towns of Sonora, Ray and Barcelona which now lies buried in the open pit mine now owned by Asarco Grupo Mexico.

It would also lead to the creation of the town of Kearny in 1958. The American Smelting and Refining Company (Asarco) would purchase the Hayden smelter from Kennecott in 1955.

In 1958 Kennecott built another smelter in Hayden. The Kennecott smelter would be closed in 1982. Asarco modernized their Hayden in 1983 and processed Kennecott’s ore.

Asarco purchased Kennecott’s holdings in 1986 along with the railway between the Ray mine and Hayden smelter. The Copper Basin Railway was then contracted with to haul the ore.

In 1999 Asarco was acquired by Grupo Mexico. During this time Grupo Mexico, S.A. de C.V. was the world’s third largest producer of copper, fourth larges of silver and fifth largest of zinc.

Today the ASARCO Grupo Mexico Ray mine employs over 800 people. The Ray mine operations consist of a 250,000 ton a day open pit mine with a 30,000 ton/day concentrator.