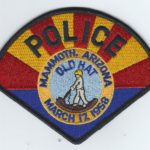 Theft was reported at Circle K.

Assault was reported in the 100 block of Clark St.