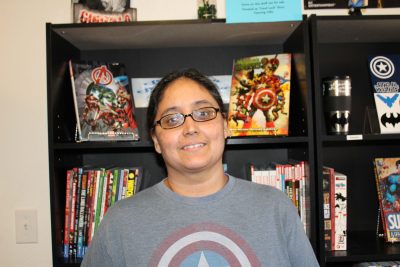 Jessie Ybarra and Laura Rivas have opened Superior’s first comic book store—Superior Superhero Stuff. The sisters were born and raised in Superior. Jessie has been collecting comics for over 20 years and her sister Laura, the store manager, has been into comics for about seven. 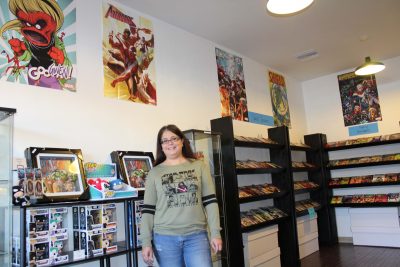 A comic book fanatic, Jessie found herself making the 40-minute trek to Mesa every Wednesday, when the new comics book come out, and that was the closest comic book store. Jessie realized she might not be the only comic book fan in the area, and thought other comic book lovers might welcome a local shop.

Opening the store, Jessie says, “was actually a lot easier than I expected it would be. I was looking for places in Mesa, Apache Junction, and even in Superior, and one day we were just driving up Main Street, and my mom sees a for rent sign.” The sign was in Smokey’s Mercantile. The comic book shop sits in the front of the mercantile and is lined with shelves full of comic books with colorful covers depicting the superheroes you see on TV and in the movies. But they don’t just carry comic books; the shop has all kinds of pop culture and entertainment memorabilia.

The hardcore comic book fans usually buy two copies—one for reading and one to put away. Comic book collecting has become a popular past time. There are also graphic novels available for readers who wish to read a whole series run or a certain comic book story line. Each graphic novel contains the material of eight or nine comic books.

The store is stocking superheroes titles for now, but Jessie says, “If someone tells me they want some offbeat comic I can look for it and order it, and it will come into the shop in a month or so.” The shop has thick books you can thumb through of all the up and coming comic books. Don’t see what you want in the store? Check out the books and put in order. And if you have a favorite comic that you are worried the shop will run out of before you can get there—you can sing up for the Pool List. Being on the Pool List will mean your favorite comic will be reserved, but the list also serves another purpose—it lets the sisters know what type of comics the customers want.

Comic book stores are mostly places for teenagers and adults, but the sisters have noticed many younger children have been coming into their shop. And because of this younger audience and their interest, the shop plans to add a shelf with kid-friendly comics.

It’s not just locals buying comics. Jessie says, “I am in shock how many out-of-towners we get. We actually had people from Globe drive specifically to Superior.” Globe doesn’t have a comic shop and, in one instance, a whole family decided to make the drive to the Superior, they turned coming to the comic book store a family event.

On May 6, the shop will participate in a nationwide event called “Free Comic Book Day.” Most comic book shops around the country participate. You can come into the shop on that day, and there will be some free comics spread out on a table. It’s an opportunity for people to try out new comics or read comics for the first time.

The store has a table in the back where people can bring in a game and sit and play. Jessie and Laura hope that Superior Superhero Stuff becomes a place where people can come in, socialize, hang out, and talk about their common interests and hobbies.