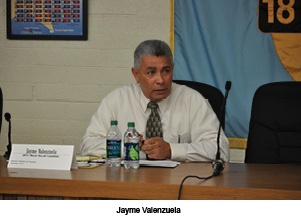 Michael Hing and Jayme Valenzuela will be squaring off Tuesday, Nov. 8, at the polls in the Recall Election.

At stake is the top seat in the Town of Superior government.

It’s up to the voters to decide who will be sitting in the mayor’s seat.

There was a large turnout Monday, Oct. 24, to hear what each candidate in the upcoming recall election had to say when presented with numerous pertinent questions by J. Peter Armenta, the moderator of the forum.

The forum was informal and meant to give greater clarity to the issues each candidate represents.

In the opening statements, each candidate noted being raised in Superior, along with giving a short history of their actions within the town. Each candidate also gave background lending them to the office of Mayor.

“I have lots of things that I want to bring to the town of Superior,” said Valenzuela. “I want to run for Mayor in the town of Superior because I want to work for the people of Superior. I want people to be able to ask questions and not be ridiculed because they are asking questions of town government…We’ve lost our leadership within the town hall. I feel that there are lots of issues that have occurred within town hall that have made people not believe in town government and right now I want to…[bring] everybody back on the same page and working towards the goal that we all have of helping Superior thrive and bringing back economic prosperity to the town of Superior.”

“We’re committed to this community and that’s why I am still here and I can say that we are setting the foundations for overcoming the obstacles that our community faces,” Hing said. “It hasn’t been easy. Our community has struggled with the closure of the mine and then with the 2008 recession, but we have been setting the firm foundations for a great future and I hope that tonight I can elaborate on some of those areas that this community is moving forward on.”

Right out of the gate, the mayor was asked about the recall and what his reactions were.

“I didn’t call the recall,” Hing said. “There is a group out there that made these accusations and today these accusations are unfounded. We struggle as a community. I am not blaming anybody, but we’ve got to deal with the current issues. The shortfalls of our revenue streams, since I have been in office, are incredible. It is hard to move in a positive direction, but we are moving forward.”

Valenzuela was asked about why he chose to run in the recall election instead of a regular election, Valenzuela said, “I believe in what we all stand for, making our community better and stronger. Now I believe that he (Hing) has lost sight of where we are going as a community. It’s not about I; it’s about we as a community, we as a council. He didn’t make those changes by himself, they were done as a council. We did it, not one person. One person does not dictate this whole community. I believe in this community as a whole.”

Armenta asked Valenzuela what he felt the duties of Mayor are.

“The duties of a mayor and council,” Valenzuela responded, “are not to be involved in the day-to-day operations. We as a legislative body are there to approve [zoning, policy and procedure]. We need to let our people do their job. If we micro manage it, we are just holding back progress. As mayor I will not be a micromanager of town government. When there are issues that arise, we as a council will address those issues; not one individual meeting with certain people by themselves, as it looks like back door deals are being done.”

“Interesting,” Hing rebutted. “Going back to Mr. Valenzuela’s issue of we and I, every decision that’s made is made here at the town council level are voted on. If Mr. Valenzuela feels that I am driving this in the wrong direction, there are six other council members that he can speak to drive it in a different direction. I am just one vote. When it comes to critical issues where the mayor needs to be there, I go. That’s part of the duty that was given to me as mayor, to make these meetings with Resolution, with Omya, with developers that come in. I make myself available. I do not run the day-to-day operation. That’s why we have a town manager. You have to have a relationship with the town manager to understand where the town is headed.”

When asked about the many issues that face the town currently and what he is doing to address them, Mayor Hing explained, “Code enforcement and petty crime in our community, that is what we need to address. You can bring in development after development, but it doesn’t do you any good unless you address the petty crime that exists, and that is due to the drug and alcohol abuse in the community. What’s the crime rate, EMS service and schools: those are the key elements for having people move to your community. It has been a struggle, but we are moving forward.”

Valenzuela considered other issues to be most important.

When asked about the economic downturn of the town and what he felt should be done to change this, Mayor Hing said, “We are on our way. We have an economic development committee that was formed. They have accomplished quite a bit. Zoning has changed a lot of what can be done. We need to change … design the zones to meet the community needs at this time. We’re addressing the downtown area to be more proactive for businesses. Superior has a visitor’s center. We have partnered with the Superior Chamber of Commerce. There are a lot of things that have been developed through the economic development committee. The EDC is going to be a non-profit so that money can be brought into the community in a non-profit status. They are continuing to move the community to look at these issues that affect the community.”

Valenzuela responded to the same question.

“I think the biggest thing that we as a community have in our favor is Resolution Copper,” Valenzuela said. “We can capture on that and move forward with Resolution. We can win and everybody can win; the community can win as a whole and Resolution can win as a whole. What Resolution is going to bring is the money that is going to be spent in the downtown area. We need to promote our community. We need to get out there and show them what Superior has to offer. Let’s be in the paper for positive things.”

Several other topics were covered during the recall candidate forum, including the many issues that are currently facing the town: the land exchange, commerce, development, fiscal responsibility and more. The debate allowed those who attended to better ascertain where each candidate stood on various issues; it was an ideal opportunity to help dispel the many rumors and issues surround this recall election.

Early ballots are out for Superior’s Mayoral Recall Election. Please remember to have them back to the Pinal County recorder by the Nov. 8 deadline. 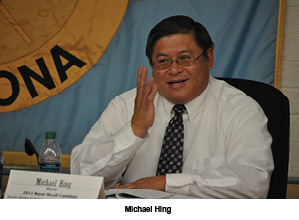