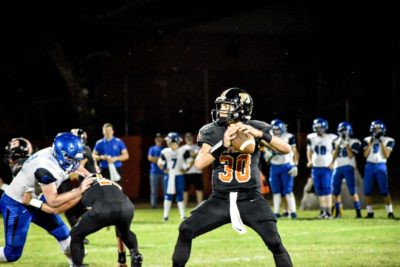 Steven Ybarra (30) looks for someone to receive a pass. Photo by Phalicitee ‘Pinky’ Thomas

After a couple of lopsided victories on the road, the Superior football team finally played its home opener last Friday night against Bagdad, a team the Panthers could face again in their quest for a state championship.

The sign of a good team is winning without playing its best, which precisely describes the Panthers’ 24 – 12 victory over the Sultans.

“We made a lot of mental mistakes and were called for even more penalties,” Superior head coach Ryan Palmer told the Superior Sun. “It was an uncharacteristic game for (us) and we are fortunate to come away with the win. Although it was ugly, a win is still a win.”

Senior quarterback Steven Ybarra threw three more touchdown passes in the victory, all of them to senior receiver Cedric Mendoza, who caught four passes for 86 yards. Ybarra finished 9-of-17 for 170 yards and has now thrown nine touchdown passes on the season, three in each game. He also led the team with 90 of its 119 total yards rushing. 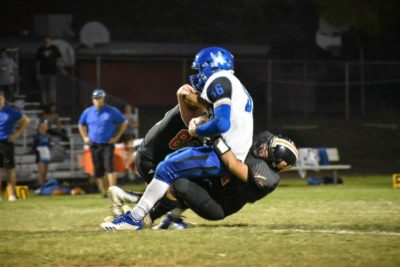 Gabriel Castillo (54) and Cedric Mendoza (80) work to bring down a Sultan. Photo by Phalicitee ‘Pinky’ Thomas

Defensively, the Panthers were led by Ybarra and Jesus Castellanos, who each had a team-high 14 tackles. Matthew Diaz-Gonzales and Mendoza added 10 tackles apiece while senior Raul Sanchez finished with nine. Ybarra (2), Mendoza (2) and Daniel McConnel (1) combined for five sacks. Castellanos recovered a fumble, the Panthers’ lone takeaway in the game.

A game like last Friday’s is a good measuring stick at this point of the season and provides an opportunity to find out where the Panthers can improve going forward.

“(We have) the potential to be great, but we are a long way from it,” Palmer said. “Our discipline and execution must improve. 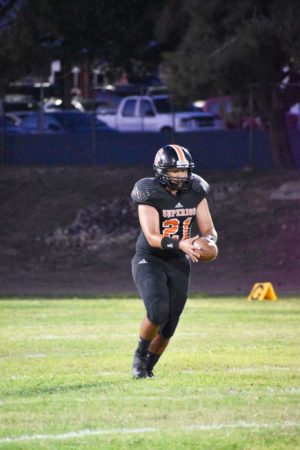 Kale Major (21) is ready to punt the ball. Photo by Phalicitee ‘Pinky’ Thomas

“This was our first real test of the season,” he continued. “This game showed us a lot of problems that need to be corrected. It’s better to identify and figure those problems out in early September then in November, when it’s too late.”

The ability to come from behind late in the game is a positive experience the Panthers can take from this game and perhaps reap the benefits when they needed it most – in the playoffs.

“Although we played far from our best game, when our backs were against the wall (our) guys rose to the challenge,” Palmer said. “That is exactly what I wanted to see. Bagdad smacked us in the mouth and we responded. The best part of this win was seeing this team come together and do what was needed to gut out a win.”