Volunteer-Based Little Free Pantry in Oracle will close … for now

In August 2020, the Little Free Pantry (LFP) in Oracle was established by volunteers looking to help others in our community during the pandemic. The motto of the Pantry is “Take what you need, leave what you can.” The only rules were “No glass, no expired or perishable foods, no opened items, no clothing.”

The Oracle Community Center (OCC) generously offered the area near its Butterfly Garden as the site for the LFP, which was suitable in terms of parking, visibility, access and safety. Nearby trees, picnic bench, table and trash container would provide shade and comfort to those using or filling the Pantry. Volunteers painted and installed the “lockers” donated by the Oracle Fire Department on the site, adding signs, a roof, shade cloth and solar lighting.

These same volunteers, and others who joined in later, regularly provided supplies of canned and boxed foods and toiletries to the Pantry. Two cubbies were set aside for the Oracle Animal Rescue and Rehabilitation (OARR) group, who began stocking canned and dry pet food. The Pantry was checked frequently by community members and refilled when needed. The OCC raised funds to purchase appropriate food items and allowed the LFP to use its trash dumpster. Other citizen volunteers donated money and food and monitored the LFP.

Later in time, the Oracle Library set up bins of free books adjacent to the Pantry every Friday from 9am to noon. This event became very popular as people could select from a variety of books, CDs and DVDs.

There were occasional problems, including doors left unlatched, trash and inappropriate items left in and outside the cubbies and rogue bands of javelina families accessing the pet food. Volunteers responded by adding door closures and excluding certain foods during the excessive heat of summer.

Over the past few months, the problems worsened. Dirty clothing and shoes were left in the cubbies, along with long-expired food, open and unknown supplement bottles and garbage. Pet food was cleaned out as soon as it was stocked. Human food didn’t fare much better.

Concerned about abuse of the site and health and safety issues raised by that abuse, the group of volunteers who started the Little Free Pantry is pausing this endeavor. Although the goal of helping our neighbors was accomplished in many ways, disrespect of the Pantry and its purpose requires a rethinking of their approach.

“Overall, the Little Free Pantry was a successful venture: it met a need in our community for over 15 months. It proved that such a need is ongoing. It provided opportunities for volunteerism and fostered civic involvement,” one of the volunteers said. 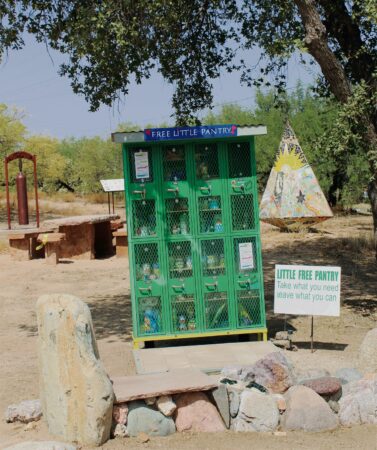 The founding volunteers remain optimistic that the Pantry will reopen in the future with an even stronger base of support and renewed dedication to its mission. To this end they hope to find a new site, fresh ideas about oversight and, of course, donations.

For more information or to volunteer, contact the Little Free Pantry organizers at:  OracleLFP@gmail.com.