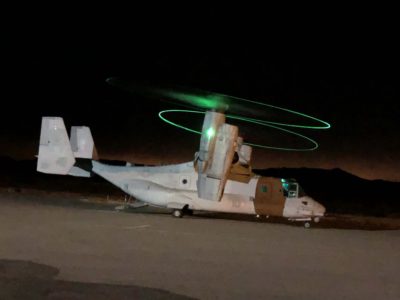 One of the two Ospreys that landed at the San Manuel Airport on Sunday.

No, those weren’t UFOs you saw in San Manuel on Sunday night.

The Ospreys are based at Camp Pendleton, California and were on a short, three-day outing in Arizona. They flew to San Manuel from Scottsdale.

The two pilots were welcomed at the San Manuel Airport and spent the time on the ground in the pilot’s lounge. Capt. James Sciscoe is originally from Fort Worth, Texas, and 1st Lt. Alex Harrell is from Washington, DC. 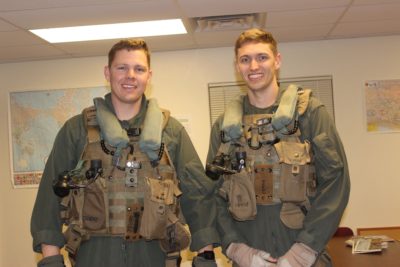 The two are part of the United States Marine Corps’ Medium Tiltrotor Squadron 364 (VMM-364), consisting of MV-22B Ospreys. The squadron, known as the “Purple Foxes”, is based at Marine Corps Air Station Camp Pendleton, California and falls under the command of Marine Aircraft Group 39 (MAG-39) and the 3rd Marine Aircraft Wing (3rd MAW).

Parrish Traweek, manager of the San Manuel Airport, received the request to land the Ospreys in the late afternoon on Sunday. He said this is the first time this type of aircraft was landed at the airport. The runway is rated for up to 46,000 pounds. The Ospreys that landed topped out at 45,000 pounds each.

The Bell Boeing V-22 Osprey is an American multi-mission, tiltrotor military aircraft with both vertical takeoff and landing, and short takeoff and landing capabilities. It is designed to combine the functionality of a conventional helicopter with the long-range, high-speed cruise performance of a turboprop aircraft. Capt. Sciscoe said it’s a very stable aircraft to fly. He did admit that the Ospreys are “maintenance hogs.” 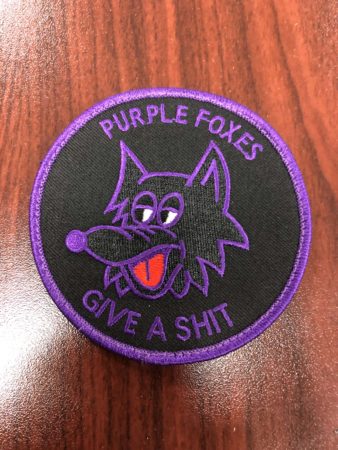 The military insignia presented to the San Manuel Airport.

In military tradition, one of the pilots gave a “Purple Foxes” insignia patch to Traweek, who said it will be added to the others in the the airport’s collection.

(And because this reporter had to ask, the green lights seen when the Osprey is in flight are on the rotors themselves and are there to prevent people from walking into them. It was a seriously cool thing to happen in San Manuel. ~jrc)