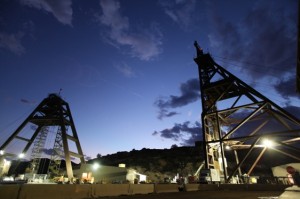 A view of Resolution Copper’s Headframes.

Officials with the U.S. Forest Service and Tonto National Forest will conduct two public workshops this month to collect information on what the public deems important with regard to mine tailings as the Forest Service analyzes alternate locations for Resolution Copper’s proposed tailings facility.

Resolution Copper’s General Plan of Operations (GPO) for a large-scale copper mine near Superior proposes that tailings (the waste material left over after processing) be pumped as a slurry to a tailings disposal facility located on national forest land between the towns of Queen Valley and Superior. The tailings facility would grow in phases, and eventually occupy about 4,400 acres (including associated structures) of national forest land.

“The workshops are not intended as a ‘vote’ for any specific alternate tailings location,” according to U.S. Forest Service Project Manager Mary Rasmussen. “Instead, using given workshop criteria, the sessions will allow attendees to provide feedback on what they feel are the most important variables to consider for a tailings location.

“This feedback will give the U.S. Forest Service a means for evaluating alternate tailings locations using stakeholder derived interests and values,” Rasmussen explained.

The workshops are part of an ongoing effort to develop and Environmental Impact Statement (EIS) for approval of Resolution Copper’s GPO concerning proposed large-scale mining operations in the Oak Flats area. It is separate from a parallel EIS being developed concerning public use of the Apache Leap area west of Oak Flats that Resolution Copper traded with the U.S. Forest Service to secure copper mining rights at Oak Flats.

Of special concern is how the modern copper mining technology Resolution Copper will use to remove copper deposits deep underground through vertical shafts by employing a technique called block caving. The method requires less blasting and drilling when compared to traditional mining. Copper concentrate extracted by this process will under the Resolution GPO be pumped 22 miles southwest along the existing Magma Railroad corridor for additional processing. Tailings left after processing will be disposed at a tailings facility 5.5 miles northwest of Superior on 4,400 acres of Forest Service land, according to Mary Morrissett, senior metallurgical specialist with Resolution Copper.

At the two workshops – which are open to all members of the public – Forest Service representatives will provide updates on the EIS process, describe the alternatives development process, and solicit input on the criteria being used to evaluate alternative tailings storage facility locations. The sessions will include a question-and-answer period.

A document summarizing the scoping process for the Resolution Copper Project and Land Exchange Environmental Impact Statement (EIS) was issued on March 9 and is available online at bit.ly/2mjNsCV. The report lists concerns raised during a 2016 comment period including the views of 133,396 people who participated in the public scoping meetings and cover a variety of environmental and social criteria.

Among concerns raised by the public in 2016 include if the tailings site has the potential to affect the municipal water supply of Superior and local air quality.

The report also lists public concerns that the entire Resolution Copper operation could increase area noise pollution, and traffic along U.S. 60 and Arizona Routes 79, 177, 88 and 24, and even the streets of Superior.

A full list of issues and concerns can be found on pages 130 to 141 in the report.

Persons unable to attend the workshops can participate in an online version that will be available at the project website at www.resolutionmineeis.us between March 23 and April 5.

The workshops are only one step in the EIS process, so no type of decision on the tailings site will be forthcoming in the immediate future, said John Scaggs, public affairs specialist with the Tonto National Forest.

“The EIS is projected for completion in late 2020, but I emphasize that is a projection,” he emphasized.