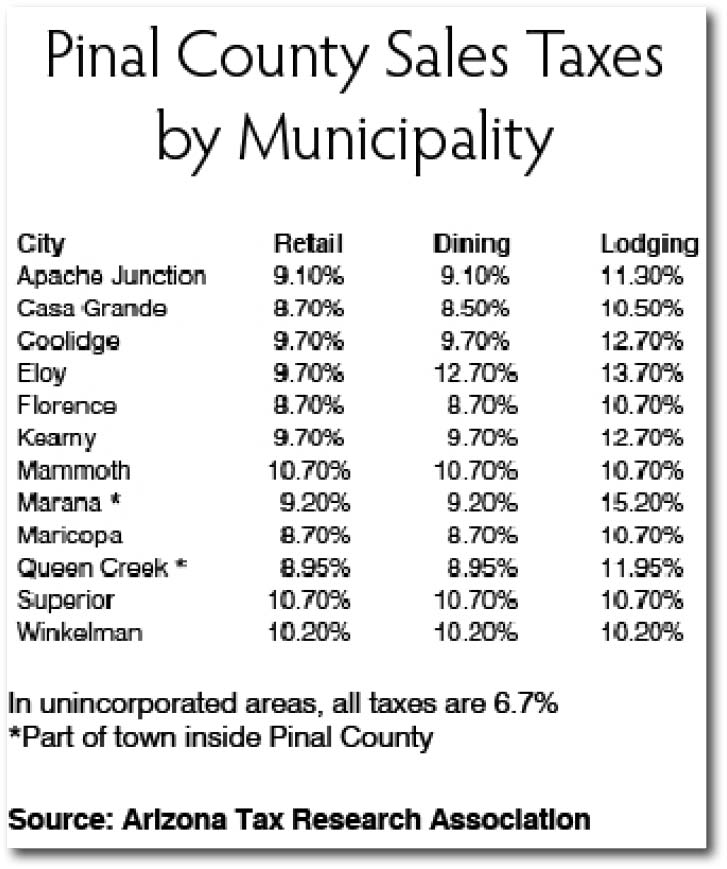 Arizona ranks as having one of the most regressive (and thus least fair) tax systems among all U.S. states, according to two studies independently conducted by WalletHub, a financial advice and services firm, and the Institute of Taxation and Economic Policy (ITEP), a think tank. Both groups are based in Washington.

According to both studies, Arizona ranks among states with the most regressive tax system because its state and local government bodies rely heavily on sales taxes (called transaction taxes in Arizona). Such taxes fall heaviest on those earning low wages as opposed to those earning the highest salaries.

Yet the Arizona income tax, which would fall heaviest on wealthier citizens, has some of the lowest rates in the nation, both reports noted.

Most scathing was the ITEP report that claimed Arizona’s reputation as a “Low Tax State,” wasn’t accurate for less affluent families.

“While Arizona’s state and local taxes average 9.59% of income, differently positioned taxpayers experience the state’s tax system very differently,” the ITEP report said. “For the top 1% of households (a group with an average income exceeding $1.2 million) the state’s low income tax rates results in this group paying just 4.6% of income in taxes. But among the 20% least affluent families (income under $22,000) all tax payments (income, sales, property, etc.) equal 12.5% of income.”

That the two reports found Arizona’s tax system to be regressive didn’t sit well with everyone. State Sen. John Kavanaugh (R-Fountain Hills) told theArizona Daily Starhe saw nothing wrong with the way the state collect revenues and that the groups doing the studies missed a key point that half the people don’t pay any income tax but probably get some sort of government benefit. It was unfair for half the people to be carrying the other half.

But Shawn Novak, associate professor with the College of Public Service & Community Affairs at Arizona State University, countered that such a view overlooks that people who don’t pay income taxes do so for lack of income. These include children, the elderly and the disabled who still pay sales taxes. Part of the reason some pay little income tax is that Arizona also is considered a low wage state.

The sales tax remains the biggest source of revenue for both state, county and municipal governments in Arizona.

On the state level, slightly more than 60% of revenues going into the General Fund comes from the 5.6% state transaction tax, according to Novak. The next largest source is the individual income tax (about 25%), the corporate income tax (6%) and the rest from other assorted taxes assessed by the state.

The sales tax rate in Arizona has long been in flux. Originally it was 4% until it was raised “temporarily” to 5% in 1984. Voters in 2000 raised to rate to 5.6% to provide more funding to education. In 2010, voters again raised the sales tax to 6.6% for three years so the legislature wouldn’t cut basic funding for education, road maintenance and the state police as they looked for ways to cut the state budget deficit caused by a down economy. This temporary tax hike proved to actually be temporary as the sales levy is now back to 5.6%.

But few people pay the 5.6% rate in Arizona as counties and municipalities are permitted to add to that rate to meet local needs.

In Pinal County, residents pay on top of the state levy an additional 0.50% for county services, 0.50% for road maintenance, and 0.10% for health services, for a total 6.7% tax on top of every retail purchase. The estimated 88,000 residents of unincorporated San Tan Valley pay the 6.7% transaction tax, but persons living in incorporated areas pay still more as cities and towns enact levies to support their services.

The lowest municipal sales tax in Pinal County is 8.7% paid in Casa Grande, Florence and Maricopa. The rate is 8.95% in the section of Queen Creek in Pinal County. Apache Junction pays 9.1%, while Coolidge, Eloy and Kearny pay 9.7%. The most economically depressed cities in the county due to the decline in copper mining as the local economic engine pay the highest sales taxes, with Winkelman paying 10.2% and Superior and (most recently) Mammoth paying 10.7%.

The highest sales tax in Arizona is 10.9% paid by those living in Fredonia in Coconino County.

“Headed south on I-10? There’s no reason to pit stop for lunch in Eloy where the restaurant sales tax is 12.7%,” said Sean McCarthy, senior research analyst with the Arizona Tax Research Association (ATRA) in the group’s August newsletter. Eloy has the highest restaurant tax in the state.

Elsewhere in Pinal County, the restaurant sales tax is equal to the retail sales tax, except in Casa Grande where at 8.5% it is slightly lower than the retail levy.

Mammoth also recently placed a 4% tax on food, which in September prompted a citizens’ protest so large the meeting had to be moved from the Mammoth Community Center to a nearby school gymnasium. At the meeting, Mayor Don Jones defended the tax, saying it was needed to raise $90,000 in revenues to help pay off the town’s debt. The fate of the tax is still up in the air.

In contrast to the sales tax, Arizona has the eighth lowest reliance on the individual and corporate income taxes, according to the WalletHub study.

According to ITEP, Arizona charges a lower rate to higher earners than most other states. While individuals earning more than $150,000 would pay only 3.3% in Indiana and 3.75% in Illinois, other states that tax income would charge a higher percentage. Among these are Arkansas (6.9%) and South Carolina (7%).

Again ITEP found most states charging a higher corporate tax, headed by Iowa at 12%. Interestingly, unlike other states, Illinois has a special lower tax rate for S Corporations (usually smaller businesses) at only 2.5% while bigger firms can pay up to 7%.

ITEP found a number of states lowering their income tax rates, usually for the stated purpose of attracting new business to the state. But according to Shawn Novak, who also is associate director of ASU’s School of Public Affairs, such reductions also cost state governments revenue which to maintain services must be made up elsewhere. In the case of education in Arizona, lower state funding for schools has prompted school districts to seek overrides that are paid for by hikes in local property taxes.

Several other minor taxes add to revenues in the Arizona General Fund.

There is a severance tax on all metalliferous metals, such as copper, gold, silver, molybdenum or other metal or any ore or substance containing such metals including turquoise that is severed within this state. Coal is not included as the coal mine in the state is on the Navajo Reservation and thus not subject to state taxation.

There also is a 2% state tax on automobile insurance. Coupled with the gasoline tax, these revenues are targeted toward building and maintaining roads. Some of these funds are granted to cities and towns to perform these chores in their areas. The Pinal County towns of Superior and Mammoth are currently paying back money borrowed against these funds to fill gaps in local budgets for town-related matters.

In its report that analyzed the 50 states as to the fairness of their local tax systems, WalletHub ranked states based on how closely they came to sharing the burden among all economic classes. According to Diane Popa, communications manager at Wallet Hub, the report’s key findings included: