The first round saw Garcia win in 7-1 match against Tuba City. Tafoya was able to defeat Fountain Hills with a pin in the second period. Lozoya faced off against Mogollon, and found the pin for a first period win. Hawkins wrestled against Miami, but lost by fall.

The second round of wrestling started off with Garcia versus Parker’s 113-lb wrestler. His match started off with intensity. He was able to gain control of the match from the beginning, working for points. Garcia won in the second period by a technical fall, with a score of 16-0. Tafoya faced off against Yuma Catholic for round two, but was sent to the consolation round after losing by fall. Lozoya also wrestled against Parker. It was a tough match that started with a battle for control. Lozoya lost the match by a 3-5 point decision, sending him to the consolation round as well. 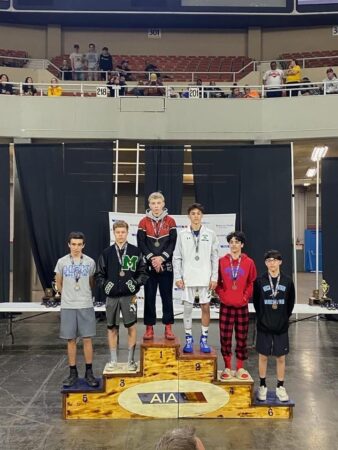 In the first round of consolations, Hawkins found himself passing to the next round because of a forfeit. In the second round of consolations, Tafoya wrestled against Wickenburg. Tafoya took control of the match once he got the first takedown, and kept it. He started to tire out in the third period, but held strong for a 6-2 point decision win. Lozoya pushed the intensity for his consolation round two match against Bagdad. Despite Lozoya only winning by two points in the 10-8 decision, he kept control during the whole match. Hawkins wrestled against Mica Mountain during the consolation’s second round. The match was quick but tough, Hawkins fought for control, but both wrestlers struggled to find it, until Mica Mountain found control in the form of a headlock. Hawkins lost by fall in the second period, putting him out of the tournament.

The third round of consolations started off with Tafoya against St. Johns. Tafoya wrestled with toughness, keeping control of the match until the third period. The last period found Tafoya struggling to keep down St. Johns. The match ended with St. Johns pinning Tafoya, ending his quest for a state medal. Lozoya wrestled against Joseph City for his third round consolation match. Lozoya found control of the match in the second period, keeping it for the remainder, winning in a 6-2 decision.

The first day of wrestling ended with Garcia’s semi-final match against Morenci. The match started off with intensity, while Garcia fought for control, but Morenci secured it. Throughout the match they would trade off control, but Morenci walked away with the pin in the third period.

For his final match Garcia wrestled against Miami, but lost by fall, ending the tournament in fourth place. Lozoya faced Yuma Catholic for his final match, winning by a 3-1 decision, securing the fifth place medal. The Miners finished in 18th place for Division IV.

“I knew going into the season, we had the potential to compete at a high level. We have a motivated group who truly didn’t know what they were capable of achieving. This season was full of distractions and speed-bumps, but we stayed on course and kept moving forward. Our wrestlers stayed focused and that’s why we were able to persevere,” commented head coach Daniel Najera. “Our team is returning two state placers, four state qualifiers, and 11 varsity wrestlers. I’m looking forward to this off-season so we can continue to build our foundation and keep moving in the right direction. Our staff is very appreciative of everyone that supported our program. Thank you.” 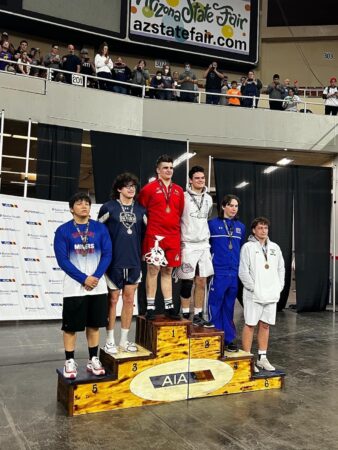