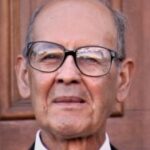 It is with great sadness that the family of Trinidad “Trini” Valentin announce his passing on Aug. 11, 2020. Trinidad, 83, passed away peacefully with his wife, Yolanda, by his side. He was a native Arizonan, born on Dec. 28, 1936, and raised in Hayden, Arizona. He was a 52-year resident of Sierra Vista. He will be deeply missed by his family and friends. He was a devout Catholic and his family was the center of his life.

He attended the University of Arizona, where he met his wife, Yolanda. He graduated with a Bachelor of Science in Mechanical Engineering. Following graduation, he and Yolanda were married at Saint Augustine Cathedral on Sept. 19, 1960.

He was drafted into the Army in 1960 and was honorably discharged in 1962. He was stationed at White Sands Missile Range, New Mexico, in the Scientist and Engineering program. He joined the Electronic Proving Ground (EPG), Fort Huachuca in 1968. He initially worked at the Electronic Test Facility (ETF) working with test chambers and other test equipment. He then worked in Greely Hall for EPG, purchasing test equipment and performing other duties in support of EPG. He was responsible for the development of the turntable used at the Arch project located on the East Range, which is visible from the Highway 90 bypass, and still in use today. He was also responsible, from concept to completion, for both the Electromagnetic Environmental Test Facility (EMETF), and Bannister Hall, which serves as the headquarters for EPG. He retired from Civil Service in 1994.

He served with the Board of the Catholic Community Services of Southeastern Arizona for 12 years, six years of which he served as President of the Board. During this time he was instrumental in the Forgach House project.

Visitation will be held on Friday, Aug. 21, 2020, 4-6 p.m. at Hatfield Memorial Chapel at 830 S. Highway 92 in Sierra Vista. On Saturday, Aug. 22, 2020, there will be a Rosary at 10:15 a.m. at Saint Andrew the Apostle Catholic Church, 800 Taylor Drive, followed by a funeral Mass at 11 a.m. Celebrant will be Father Gregory Adolf. Interment will follow at Cochise Memory Gardens, 5590 E. Charleston Road. A reception will follow at the Knights of Columbus, 156 Kayetan Drive. In lieu of flowers, a donation to the Friends of the Sierra Vista Public Library in honor of our Dad would be greatly appreciated.

Face masks/coverings are required for the church and in public in Sierra Vista and social distancing should be observed.