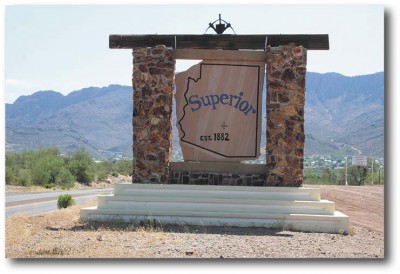 Myriad issues concerning the revitalization of Superior ranging from fixing the streets to attracting new businesses to the downtown area were addressed during a marathon meeting of the Superior Town Council on January 12. The meeting ran over three hours.

Road projects commanded the most attention from Council members as they unanimously accepted a study by Jacobs Engineering on how to tackle the current town problem with deteriorating streets. The study recommended a five-year repaving program under which Superior would be divided into zones with all town streets within restored to smooth thoroughfares. Zones with the worst streets would be tackled first, and that a variety of treatments would be used ranging from patches on better streets to complete asphalt repaving on the most deteriorated.

According to Jacobs representative Richard Powers, grouping the road rebuilding by zones would speed the work and reduce overall costs by not having to move around equipment that much. While the study proposed an order as to which zones would get priority, though Powers – in reply to a question from Councilman Gilbert Aguilar – said the Town Council could vote to change the order of zoned work.

The study estimated the cost of the five-year street rebuilding project at $1.25 million, to be paid for with HURF (Highway User Revenue Fund) monies, and by any additional amount the Council chooses to add under the Inter-Fund repayment agreement with the Arizona Office of the Auditor General to replace HURF monies used for non-road projects in 2009-2012. Superior received $212,168 from HURF in 2016.

Additional funds might also come from the $300,000 in annual funding from the Pinal Regional Transportation Administration should the agency’s proposed 20-year 0.5% sales tax be enacted by Pinal County voters later this year, Powers said. Still another funding source could be secured through Central Arizona Governments – of which Superior is a member – which offers annual grants to small communities for infrastructure projects.

An earlier study conducted by Superior Town Government and the Arizona Department of Transportation (ADOT) found that 90% of Superior’s 25.6 miles of streets are either in very poor, serious or failed condition. The worst street was Panther Drive, followed by Stone Avenue south of U.S. 60, Western Avenue, Stansberry Street south of Lime Street, and Porphyry Street.

The Jacobs study also found that 40% of Superior’s 23 miles of sidewalks are in poor condition, but no plan to repair them was proposed.

Council members will determine funding levels and priority of street repair projects in the coming months.

Earlier in the meeting, the Council heard from Mindy Teague, senior resident engineer with the ADOT Southeastern District, that the U.S. 60 reconstruction project was ahead of schedule. However, the project has encountered some detours.

At the intersection of U.S. 60 and Main Street, ADOT has encountered some problems with the slope east of Main and is reworking it to prevent rocks from falling onto the entry to Main, Teague said. Workers also are adjusting connections of driveways to the widened U.S. 60 to improve drainage so water doesn’t collect at them as it did during rains that fell the previous month.

ADOT will consider a proposal from the Superior Council to switch new U.S. 60 street lights from halogen to LED bulbs. Teague said ADOT is studying what type of fixtures can be used with LED lamps. LEDs, while initially more expensive, can last up to 10 times longer than halogen lamps.

ADOT also will adjust to less intense the new lighting in the Queen Creek Tunnel after finding driver complaints that they are too bright – and thus a distraction at night – to be true.

In reply to a question by Councilman Steve Estatico, Teague said that ADOT will not begin its study on speed limits and pedestrian crossings along U.S. 60 under after reconstruction is complete. ADOT needs to see what traffic patterns develop along the widened roadway before determining what a safe speed limit should be, and where pedestrian crossings and their timing should be, she added.

Replacement of Superior’s 500 street signs should begin in March, Teague reported. These will include all signs with street names, along with “stop” and other traffic control signs. The new name signs will be larger and easier to read at night.

Bill Harmon, ADOT Southeastern District engineer, reminded the Council that if the town secures federal transportation funding for its street revitalization project, the law requires that such construction must be administered by ADOT.

Also during the meeting, Council members voted to contract with Coffman Associates to create a master plan for revitalizing the town’s airport. Budgeted at $12,500, the study will direct how Superior will use a $237,000 ADOT E72V01P grant for airport improvements.

Guidelines for eliminating blight in Superior, which were hammered out during an earlier work session, were approved unanimously by the Council. The guidelines set criteria for requiring property owners to maintain their property and keep that property free of junk and trash. Fines for repeated offenses are included. The guidelines were praised by Sue Anderson, head of the Superior Chamber of Commerce, which in November announced it had secured paint that property owners can use to beautify the outside of their homes.

Resolution 17-568 establishing a town policy on the acceptance of public art was unanimously approved by the Council. The new statute sets the procedures as to the type of art and where it can be placed on public grounds. The law is identical to one already on the books in Prescott, AZ.

Which businesses could lease a town-owned building at 350 W. Main St. was tabled by the Council, sending the proposals back to negotiation with Town Manager Todd Pryor and Town Attorney Stephen Cooper. The town received proposals from both Superior Fitness & Personal Training, already operating on U.S. 60, and All Bout Clothing, a discount apparel chain with stores in Holbrook and St. John. Both proposals included performing improvements to the building to be repaid by Superior through reduced rents. It should be noted that All Bout Clothing’s offer includes a requirement that the Town reimburse its investment in tenant improvements should the business leave before the lease expires.

“I’m concerned that these proposals are a little one-sided in that if the businesses close before the four-year lease period the town could have to eat substantial remodeling charges to make them suitable for the tenant’s needs,” said Councilman Gilbert Aguilar.

Jeff Morris, owner of All Bout Clothing, defended his proposal, noting that the building needs major work on the electrical and air conditioning systems and the bathroom fixtures, which he estimated would cost about $20,000. But an additional benefit to Superior would be increased sales tax revenue generated by a retailer vs. a gym operating at that location.

However, on a motion by Council member Vanessa Navarrette, the Council voted to renegotiate with both prospective tenants for terms more favorable to the town.

In other business, Mary Rasmussen, project manager with the U.S. Forest Service (USFS), appeared before the Council to ask for a Vision Statement” on what should be done with the Apache Leap Special Management Area just east of Superior.

The area is the 807 acres of land acquired by the USFS in trade for the land in the Tonto National Forest deeded to Resolution Copper for its mining project under a federal law signed in December 2015, Rasmussen noted. Congress dictated that USFS manage the area so as to preserve its natural characteristics, allow traditional uses by Native American peoples, and conserve cultural, archeological and historical resources within its boundaries. But the law also specifies that USFS protect the area’s access to recreation.

USFS is required to prepare a plan on the area’s use by next December. So, the agency is contacting communities around the area on what types of uses they’d like to see in the area. From messages already received by USFS, a majority wants the area open for rock climbing, hiking, non-motorized biking and horseback riding; but with commercial development severely limited. New access to the area from the west is requested as the Resolution Copper project closed some eastern access roads. New campgrounds also have been proposed.

Being closest to Apache Leap, Rasmussen said the opinions from Superior will carry much weight. She requested the town’s Vision Statement by Jan. 31, but accepted an extension to Feb. 9, the date of the next Town Council meeting. Superior citizens can send their own opinions on the uses of Apache Leap to the Town Hall.

From these Vision Statements, USFS will develop a plan, subject it to public comment in May, conduct an environmental assessment on how the plan will impact the area, open it for additional comment in September before issuing the final notice in December.