Tommy Chavez: A hole in one for the ages 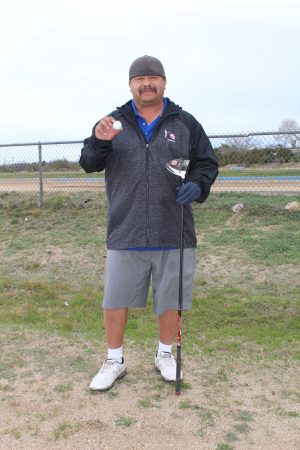 Tommy Chavez – a hole in one!

On Feb. 25, 2017 Tommy Chavez of Oracle was the lucky golfer who made a hole in one at the del Lago Golf Club in Vail, Arizona.

What is unusual about the shot that Tommy made, was that it happened on a Par 4 hole which is even more of a rarity. Tommy was playing with the Southern Arizona Men’s Golf Club. He was teamed up with Robert Bryant, Bruce Clayton and Martin Pereyda. Tommy called it a “crazy day”. He said that usually the wind is blowing 15 to 30 miles an hour on the course but on this day the winds were calm.  The foursome got to the 8th hole, a 302-yard Par 4.

Tommy’s three partners all laid up on their drives. Tommy pulled his driver out and Bruce said, “You’re going to go for the green.” When Tommy said yes, Bruce added, “This I want to see.”

Tommy drove his shot right at the flag on the green. He jokingly told Bruce, “It’s in the hole.” On their second shots, his three partners failed to get the ball on the green. When they arrived at the green, they did not see Tommy’s ball anywhere. Tommy went and looked in the hole. There it was! Tommy yelled, “Thank you, God, a hole in one!” His partners were excited for him.

Tommy is the son of Felix and Maria Chavez of Oracle, Arizona. He grew up playing golf at the course in Hayden.

“I am just a small time golfer from Oracle,” Tommy said. So for him, the hole in one  “was like winning the lottery or the U.S. Open golf tournament.”

Tommy ended up shooting a score of 67, five under Par.

“It was a beautiful day,” he added. He will be playing in the Mammoth-San Manuel Education Foundation benefit golf tournament at the Hayden golf course on Saturday, March 11. Come by and congratulate him. Congratulations, Tommy, on a phenomenal golf shot!

*Note from the Editor: So for those of us out there who aren’t golfers, “Par is the predetermined number of strokes that a scratch (or 0 handicap) golfer should require to complete a hole, a round (the sum of the pars of the played holes), or a tournament (the sum of the pars of each round).”  I had to look that one up on Google. If you want to know more about where the term “Par” came from, click here.