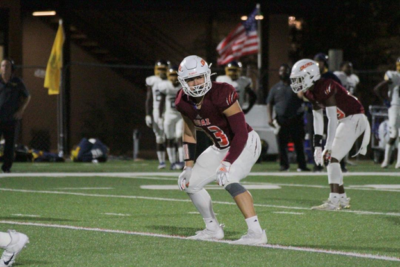 Former Superior resident and current Ottawa University Senior student and captain of the OUAZ football defense, Brandon Tomerlin Jr., and the OUAZ Football team move into first place in the Sooner Athletic Conference standings.  They faced Wayland Baptist at Bulldog Stadium, in Plainview, Texas on Saturday and pulled away with a 61-30 victory over the bulldogs.  In order to keep hopes of playoffs alive, OUAZ needed this win.

Brandon led the Spirit defense with 9 tackles and added one tackle-for-loss and a forced fumble.  Brandon is 1 tackle away from breaking Ottawa University’s football school record for all-time leader in tackles.  This season, he currently has 59 tackles, 1 forced fumble, and 1 deflected pass, totaling 145 tackles, 1 sack, 2 forced fumbles and 1 deflected pass for career stats at OUAZ.  They will close out the regular season on Saturday, Nov. 13, with a home game for Senior Night against Oklahoma Panhandle State at 7 p.m. in Surprise, AZ.  You might want to head to Surprise, AZ and possibly see Spirit history being made, with Brandon needing 1 tackle to make history.

Currently, in his 8 games he’s played this season, he has 31 solo tackles, 28 assisted tackles, totaling 59.  He averages 7.4 tackles per game. Tomerlin, a 6-foot-2, 240-pound linebacker, signed with the in-state Ottawa University in 2018, which is located in nearby Surprise. Head coach for Ottawa University is Mike Nesbitt and Defense Coach for OUAZ is Mike Bethea.

Tomerlin told Copper Area News Sports Reporter Andrew Luberda in 2018 that he chose Ottawa University because they were the only school that was willing to give him a shot and they believed in him. He said, “I’m not going to let them down.”  He was looking forward to another exciting chapter in his life and making a brotherhood and family at Ottawa, just like he did at Desert Ridge.  After moving from Superior in 2008, during the middle of second grade, Brandon has persevered in his pursuit of playing football throughout his years in tackle football leagues, to his career at Desert Ridge.

“Competing at Desert Ridge High School taught me toughness and how to compete for what I want,”  Tomerlin said. “I won’t let anything stop me from reaching my goals.”  Despite moving away from the mining town in 2008, family and friends still motivate Brandon on and off the field.

Brandon told Andrew, “I couldn’t have done without my family pushing me and my coaches along my way. I am doing this for my family, and all of my friends from Superior.  I’m representing them every time I step on the field.”

Brandon still feels the same way he did in 2018, when he spoke to the late Andrew Luberda.  When he steps on the field, he plays for his hometown of Superior, along with his family, his friends, and his legacy at Desert Ridge. He doesn’t want to let Ottawa University down for believing in him and he is representing his hometown and his brotherhood of football players along the way. 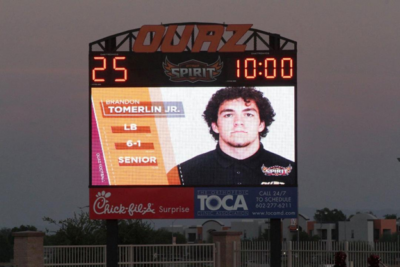 Brandon is son of Brandon Tomerlin and Billie Jo Villaverde; grandparents include Nacho and Dora Villaverde and Ron and Sandi Hansen, all Superior natives.