The Dudes on the San Pedro 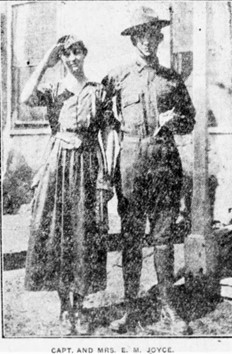 Captain Edward M. Joyce served with distinction in France during World War I. Joyce was one of the youngest Captains serving in France. He returned to his wife and daughter in 1919. They would have another daughter in 1920. He soon found himself working at his old job with the Southern Pacific Railroad in Willcox, Arizona. He helped organize the first American Legion Post in Willcox. In 1922, he was elected to the Willcox city council as a committeeman.

Later in June 1922, it was announced that Joyce and an eastern investor were preparing to open what they called Arizona’s first “Dude” ranch. Joyce and his partner took a long-term lease of the Seven Dash Ranch and the VF Ranch encompassing around 300 square miles of cattle ranch land located at Johnson, Arizona (now a ghost town) about 25 miles from Willcox. The Seven Dash Ranch was owned by Joyce’s father-in-law, H.L. Johnson. The VF Ranch was owned by the Mule Shoe Cattle Company. They also obtained bathing concessions at Hot Springs for use of their guests. The ranch had accommodations for 20 guests but by September construction plans would allow for many more, newspapers reported.

The Tucson and Phoenix chambers of commerce as well as the Arizona Republic began promoting Joyce’s dude ranch and calling for more ranches to embrace the idea of dude ranches. Newspapers back east also picked up on the story of the Seven Dash Ranch and soon Joyce said his dude ranch was becoming successful and more construction was planned to accommodate winter visitors.

In October, Joyce announced that the dude ranch was doing well and that he had purchased the Carlink Ranch near Redington and was making renovations to make it another dude ranch. Newspapers reported that two easterners, Katharine and Alexandrine McEwen and the famous hunting guide W.W. “Bill” Hugget had formed a corporation, the McEwen Ranch Company, for the purpose of conducting a dude ranch. The McEwen sisters were English ladies that had been living in Detroit, Michigan. Bill Hugget was a well-known guide who had worked at Yellowstone National Park, the Grand Canyon and the San Carlos Hotel in Chandler, Arizona.

On Nov. 25, 1924, newspapers reported that Captain Joyce had shot and killed a “cowpuncher” at the Carlink Ranch on Saturday afternoon, Nov. 23. The cowboy victim of the shooting was Jesse Whitley, an employee of the Johnson Ranch and formerly an employee of Joyce. Following the shooting, Joyce took his family and a man who had been photographing the ranch and ranch hands for advertising purposes, and motored to Willcox where he turned himself over to Cochise County authorities. The Arizona Daily Star called Joyce the “Dean of dude ranches” in Arizona having started up the Seven Dash Ranch two years earlier and now operating the Carlink Dude Ranch.

On Nov. 24, Joyce was returned to the Carlink Ranch and turned over to Pima County Sheriff Walter Bailey and his deputies. Redington was in Pima County so they had jurisdiction in the case. The Sheriff had brought the county coroner, deputy county attorney and other Tucson citizens to serve as a jury for the coroner’s hearing. The coroner’s jury ruled that the death of Whitley was caused by three bullet wounds from the gun fired by Joyce. The wounds were to an arm, chest and head of Whitley. The head and chest wounds would both have been fatal. When Joyce was turned over to the Pima County deputies, he said, “I shot him to save my wife, my home and myself.”

Joyce was brought to Tucson for trial. The preliminary hearing was held on Dec. 1. A San Pedro Valley farmer, Ernest Thompson testified that he had seen Joyce call Whitley into his office about some pictures. Shortly after Whitley entered the office a shot was heard and Whitley ran out of the office with Joyce chasing him. Another shot was fired and Whitley fell to the ground. Joyce stood over him, hesitated then fired a shot into Whitley’s head. Thompson testified also to what Joyce had said following the shooting.

Joyce said, “I’m sorry that all of this happened. Things will happen this way. He had insulted my wife twice before and this makes a third time. No man can insult my wife and live. It’s the first time I have killed a man like this.” Thompson said Joyce then referred to killing Germans in France and said something about his wife asking him to run Whitley away several days before but he had not done so. William Rhodes and other cowboys also testified. Joyce was charged with first degree murder and denied bail.

The trial began on Jan. 19, 1925. The courtroom was full of spectators including friends of Captain Joyce and family and friends of Jesse Whitley. Whitley’s three brothers attended, traveling from Ballinger, Texas. Much of the testimony of witnesses was the same evidence brought up during the preliminary hearing. There was no question that Joyce had killed Whitley. What needed to be known was why Joyce had shot Whitley which the defense attorneys hoped would mitigate the offense or justify the shooting.

On the second day of the trial, it was learned that Whitley had been unarmed and in fact had left his gun in his room at the ranch. Captain Joyce was called to testify and told the story of what had happened the day of the shooting. Joyce told the jury that prior to the shooting he had overheard Whitley and his wife Lillian having a conversation in the kitchen. He had been in a room next door and had eavesdropped by a doorway where he could hear them clearly. He heard Whitley pleading with his wife to run away with him and that he had to see her again.

According to the testimony, Mrs. Joyce had said that “she was losing her self-respect and was not playing square with her husband.” She then threatened to go to her husband and tell him about the alleged affair. When she did this, Joyce said that Whitley threatened to kill her and Joyce. Captain Joyce left and went to another building to collect his thoughts. He saw his wife pass by and called to her. She went to the room where he was at and told him about the affair. She said that Whitley had called upon her whenever Joyce was away from the ranch. How she had finally given in to his overtures and then he had told other people at the ranch about their relationship. It was shortly after talking with his wife that Joyce went to confront Jesse Whitley and the shooting happened.

The final day of the trial had Mrs. Joyce, dressed in black, tearfully provide testimony about her indiscretions with Jesse Whitley. The Tucson Citizen reported Captain Joyce’s reaction to her testimony saying, “His face was bleached with the disasters that had befallen, and his shaking hands and body quaked noticeably when the woman he had married took the stand and told of her clandestine love and relations with a second man.” Following the day’s testimony and concluding arguments, the jury was sequestered and began deliberations.

On Jan. 25, the jury found Captain Edward M. Joyce guilty of the lesser charge of manslaughter. Judge Gerald Jones sentenced him to 6 to 8 years in the state prison at Florence. Shortly after he entered prison, his wife Lillian moved to California with the children and divorced the Captain. Joyce soon became a trustee and was the chauffeur and secretary for the Warden. Attempts were made to have him pardoned but were unsuccessful. After serving 3 years and 8 months of his sentence, he was released from prison in October 1928. This early release was due to his trustee status which allowed him to be given credit of two days for every one day served.

Joyce soon became the manager of the Spur Cross dude ranch near Carefree, Arizona. He also began raising polo ponies. In April 1930, Joyce found himself in trouble when he was arrested for a statutory violation when R.B. Baker the father of a 17-year-old girl claimed Joyce had relations with his daughter. Joyce was 38 years old. In May 1930, Joyce married Miss Robye Marzell “Barbara” Baker, the complainant’s daughter and charges were dropped. They would have two sons and stay married until Captain Joyce’s death in 1956. He was buried with full military honors in Arlington National Cemetery in Virginia.