The Ballad of Pearl Hart 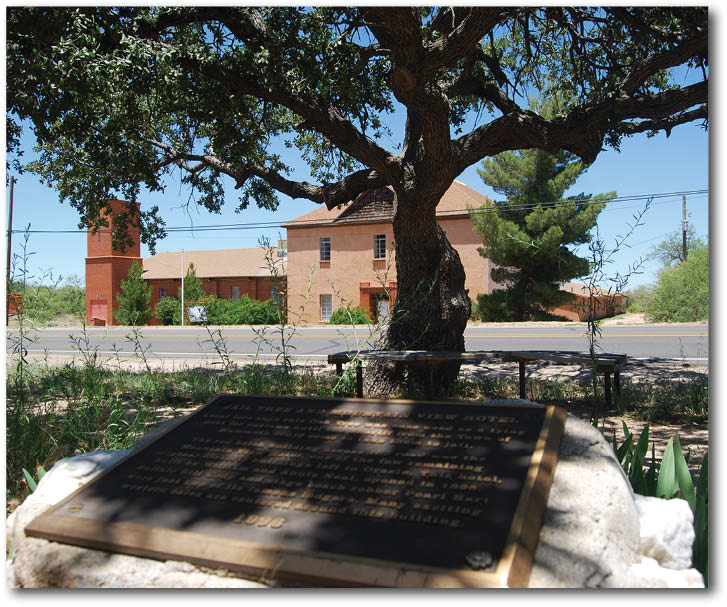 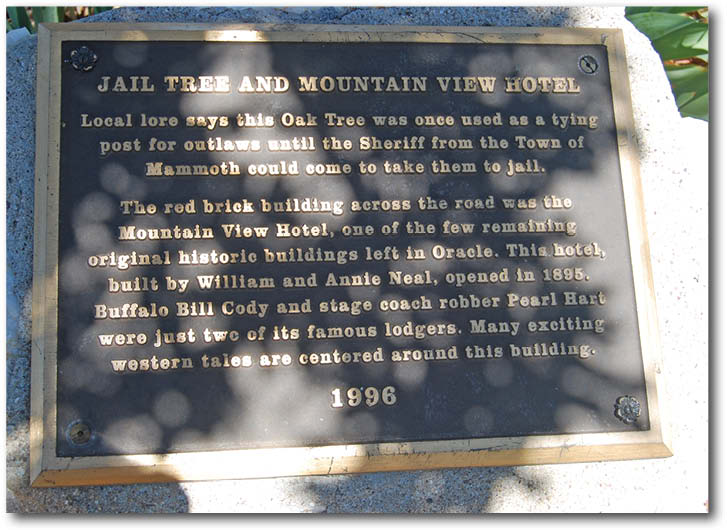 Can you guess where in the Copper Corridor the cover photo was taken? If you guessed Oracle, then you would be correct. This is the famous (infamous?) Jail Tree in Oracle. It is believed (and is included on the plaque at the base of the tree) that Pearl Hart was once tied to that tree. The tree is located on American Avenue directly across the street from the First Baptist Church which was once the Mountain View Hotel. The Nugget has been taking our readers on a journey through the Copper Corridor, helping you to ‘Get Lost.’ We hope you continue to travel with us. John Hernandez | Nugget 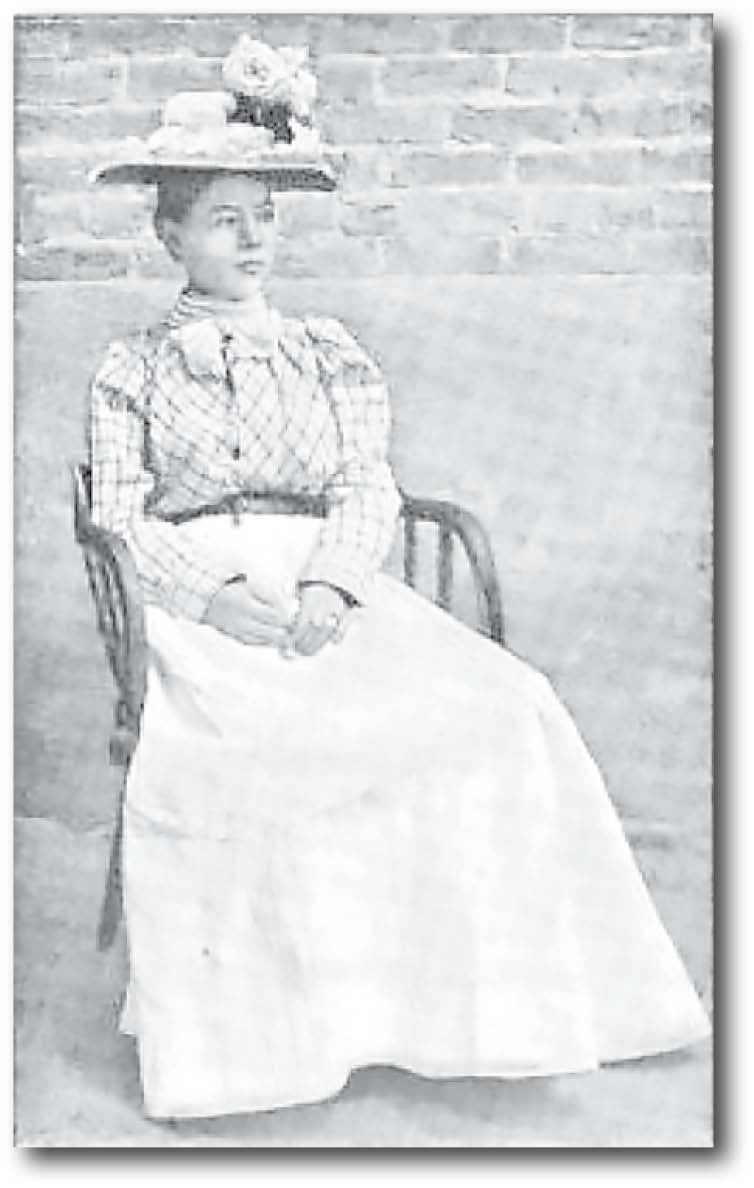 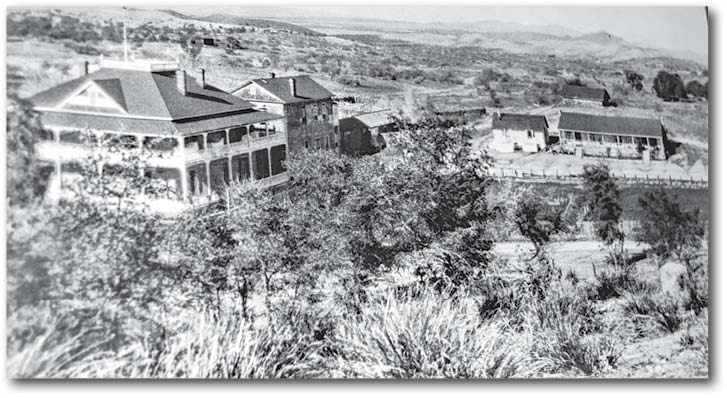 The last days of the wild west unofficially came to an end on May 29, 1899 when the Globe – Florence stagecoach was held up by a pair of bandits. This holdup was notable for two reasons. The first reason was that this was the very last stagecoach robbery in the history of the American west. The second reason this hold up was noteworthy was that one of the bandits was a woman – a woman named Pearl Hart.

Pearl Hart was born as Pearl Taylor in Lindsay, Ontario, Canada in the year of 1878. After her career of infamy, a school chum wrote to the Arizona Historical Society and described the teenage girl he had known years before. “She was a pretty girl and had a wonderful figure and voice; could imitate a croaking frog, an owl, a hawk, could sing like a mockingbird… was lithesome, blithe and witty; gushing with fun and jollity; also a wonderful dancer, and very attractive. Everybody admired her and was proud of her acquaintance; but she possessed one detrimental fault which brought her many troubles. She was too amorous; accepted too many dates with handsome young men, which finally caused her undoing.”

That undoing began in the shape of a young man named William Hart who married Pearl when she was just 16. William Hart was not willing to work except to earn just enough to slake his thirst for alcohol. Rather than starve, Pearl Hart hopped a train south of the border and eventually ended up in Phoenix, Arizona. While a resident of Phoenix, she made the acquaintance of a dance hall musician and tin horn gambler named Dan Bandman. Bandman taught Pearl how to drink, smoke, and even how to use opium. Their relationship was interrupted when Dan enlisted into the Spanish American War.

For awhile, Pearl made her living in Mammoth, Arizona, cooking for miners in a tent pitched along the shores of the San Pedro River but soon she made her way north to Globe, Arizona. It was while in Globe that she met her future partner in crime – a German named Joe Boot. When Dan Bandman reappeared on the scene, asking for money, Joe Boot helped Pearl drive her former lover away. Together, Joe and Pearl, worked a small mining claim but unfortunately the ore was worthless. One day, a letter arrived from back East announcing that Pearl’s mother was gravely ill and that if Pearl wished one last visit she had better hightail it back home soon. Desperate, Pearl and Joe came up with a desperate plan.

On that infamous day, Henry Bacon was sitting atop the stagecoach as the driver. He had a Colt .45 revolver on him but it was not loaded as he did not expect to use it. The days of Indian raids and stagecoach robberies were long gone. In fact, the Florence – Globe line was one of the few stagecoaches which had not yet been replaced by the railroad. There were three passengers enduring the jolts of the rugged mountain road – a traveling salesman, a tenderfoot “with his hair parted in the middle”, and a Chinaman. As the driver approached the sharp turn at Cane Springs he applied the brakes to slow down. As he did, two unmasked bandits leapt out from the bushes – both holding weapons.

The driver stopped and the passengers exited. Although dressed as a man it was obvious by the swell of her bosom that the smaller of the two thieves was a woman. While Joe Boot held a shotgun on the stagecoach passengers, Pearl searched the victims and put the money in a burlap sack. The salesman was carrying $380 dollars in cash, the tenderfoot $36, and the Chinaman $5. The bandits took it all plus the salesman’s watch. As they prepared to leave Pearl returned a dollar to each man, providing “just enough to eat.”

Pinal County Sheriff W. E. Truman was soon hot on the desperadoes’ trail and traced them to a schoolhouse twenty miles north of Benson. The posse snuck up on the dangerous duo while they were sleeping. A newspaper named The Silver Belt described their capture.

“The officers came up, removed their armament and awoke them. The woman sprang up, fighting, but the man made no resistance. His companion reproached him in vile and profane language for his lack of sand and said that if the posse had tried to capture her while she was awake, she would have made some holes in it.”

While in jail Pearl became an instant celebrity. Again, the Silver Belt described the scene: “The woman is receiving much attention, an afternoon rarely going by without her having lots of callers and herself being photographed. The camera fiends have taken shots of her with all sorts of firearms and looking as much the desperado as they can make her.”

The commotion in Florence was too much for Sheriff Truman to handle and soon Ms. Hart was shipped to the Pima County Jail in Tucson. A man named Ed Hogan, a notorious bicycle thief, who was serving a sentence for being drunk and disorderly, quickly befriended Pearl. Hogan had nearly finished up his sentence and was a trusty at the jail. He fell in love with the female bandit and she enlisted his aid in her escape. At night, Ed Hogan cut a hole in Pearl’s plaster wall and she had escaped but not before leaving behind a note which declared her a fan of the campaign for woman’s emancipation.

An editorial writer for the Arizona Star was impressed with her arguments. He wrote: “That laws should be enacted by the consent of the governed is a fundamental principle of our government… Woman is not given the right to consent to the enactment of the laws which provide these penalties. Then why should she be made to suffer.”

The big city newspapers back east soon made the “Lady Bandit” a celebrity and a bit of a Robin Hood hero. Arizona newspapers, the law enforcement figures who had been forced to deal with her replied that many of her troubles were of her own making and even her own family was forced to admit publicly that Pearl was quite an opium fiend. Pearl Hart and Ed Hogan ran off to Deming, New Mexico where she had attempted to set herself up as a sort of queen of thieves. She was soon recaptured.

On June 15, 1899, Pearl Hart and Joe Boot came up for trial. Joe pleaded guilty and was sentenced to 35 years in jail. Despite the hundreds of times Pearl had not only admitted but even boasted of her part in the crime – Pearl chose this moment to plead her innocence. The jury came back with a verdict of not guilty. Judge F. M. Dean was outraged by this verdict and had the bailiff immediately arrest Pearl Hart and roasted the jury for their dereliction of duty. She was immediately tried again on the charge of stealing the stagecoach driver’s pistol. This time the jury gave her 5 years in prison.

She was sent to the Territorial prison in Yuma and it was said that on her journey to her new residence she puffed cigars constantly, emitting a stream of smoke which matched that of the locomotive she was riding. The celebrity circus continued. The guards “lost interest in watching the other prisoners and gravitated towards her cell with a hilarious enthusiasm that was harmful to discipline.” There were also “visiting newspapermen and the camera fiends who always begged the warden to let her pose in the jail yard with a six shooter or a Winchester.” On December 19, 1902, two years before her sentence was up, Pearl Hart was pardoned by Territorial Governor Brodie. The governor explained the pardon by stating that the Yuma Prison “lacked accommodations for women prisoners.” Nearly half a century later, historian Bert Fireman uncovered the true story for the Arizona Republic. Pearl Hart was pardoned when the prison doctor confirmed that the female prisoner was pregnant. Rather than allow the scandal of a baby being both conceived and born in prison, Pearl Hart was pardoned on the governor’s sole condition that she leave Arizona for good.

After her release from prison Pearl Hart disappears from certainty in the historical record. Some claim that she appeared on the vaudeville stage in a play about her exploits as the lady bandit in a show bankrolled by William Randolph Hearst. Others state that she may have briefly appeared in the Buffalo Bill Wild West Show. There were rumors that she ran a gang of pickpockets in Kansas City, while others place her in this fine metropolis but believe she only ran a cigar store while there. There was even one anecdote about a tour guide leading a group through the old Pima County Jail when at the end of the tour a little old lady came up and confessed. “Thanks for showing me where I stayed for awhile. I’m Pearl Hart.” Then she walked away.

The last theories about Pearl Hart’s whereabouts come from some old time Arizona pioneers who believe that she settled down as a ranchers wife on a homestead outside Globe, not far from Cane Springs and the site of the stagecoach robbery which provided her moment of celebrity infamy. The woman who some believe might have been Pearl Hart passed away on December 30, 1955.