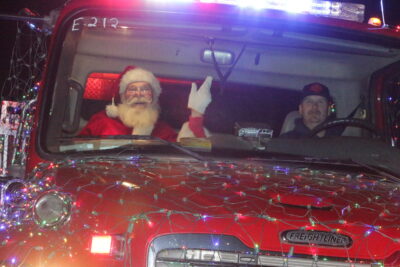 Santa Claus waves from the front seat of a Superior Fire Department truck.

The Superior Fire Department has been working with Santa’s team at the North Pole and both agencies are reporting that the weather is expected to be uneventful, on Christmas Eve.

“It will be clear but chilly on Christmas Eve with the daytime high of 66 degrees and a nighttime low of 40 degrees,” explained Elf Sunny McWeather, the lead weather reporter at the North Pole.

It was rumored that the Grinch and Associates were attempting to dismantle the tradition, but after a series of negotiations, it was determined that the Superior annual Santa drive was a time honored tradition in the community and must continue.

“Grinch and Associates saw the recent years of bad weather and covid restrictions as an opportunity to stop spreading joy and good cheer through this tradition,” said an unnamed source close to the Grinch.

The clear weather will ensure that Santa will be able to make a longer stop in Superior to ride on the fire truck with the Superior Fire Department greeting families throughout Superior.  Air Evac 7 out of Pinto Valley will transport Santa to Superior and he is expected to arrive at 4:45 p.m. at the landing zone near the (school parking lot) Fire Station located on Golf Course Rd.

“The reindeer will be taking a break at an undisclosed location near Pinto Valley,” stated Director of Reindeer Health and Safety Rayna Redknose. During their break the reindeer will be fed their special diet to ensure they can make the rest of the journey across the world.

Superior Fire Chief JP Perez explained that once Santa is loaded, they will drive to the Arboretum and Superior Highlands neighborhoods.  Following those two neighborhoods, they will then proceed to the north side of town to travel each street.  Children who come out to greet Santa and his team, will be given a gift from Santa.

It is expected that Mrs. Claus will also be joining Santa during his visit to Superior.  Her communications team was unable to confirm her attendance but sources close to the couple, reported that she is planning to join Santa. Following the visit in Superior, she is expected to return to the North Pole via a  private sleigh.   Several A-List elves will also be attending but a full manifest has not been released by the North Pole.

Data reports are indicating that the majority of the children in Superior are on the nice list, which will require a bit more time for Santa.

“This 17-year tradition is truly one that makes our community special we appreciate Santa giving us a little extra time on his big night,” stated Mayor Mila Besich.

Throughout the year, Santa  and Superior Fire Department collaborates with a many local non-profits and corporations to ensure there are enough toys available for every child to receive something.

“The O’Donnell family’s annual Christmas party provides a majority of the needed toys, along with toy drives sponsored by the Peligrosos Car Club and Society Car Club. We are grateful for the additional support from these upstanding organizations,” stated Chief Financial Officer Elf Givey McGiverson.