San Manuel kicks off season with a win

The San Manuel high school football team kicked-off their 2022 season with their first official game last Friday, Aug. 19. The Miners took to the field of their home stadium, ready to show Anthem Prep whose house they were in.

The Miners held a strong defense for the first half of the game, not allowing any points to get onto the scoreboard. The boys were able to score 16 points in the first quarter, followed by a 14-point second quarter. The second half of the game saw Anthem Prep post some points, but not enough to catch them up with the Miners. The end result of the game was in the Miner’s favor, with a final score of 30-14.

“All of the players did their job. We have some work to do, and we will be coming up with a plan for next week,” commented head coach Ernie Ivy. “We started off in the first half, doing really well. Second half, we got too relaxed, we need to push hard throughout the whole game. We also need to cut out the penalties.”

San Manuel will travel to Mogollon on Saturday, Aug. 27, for a head to head battle with the Mustangs. The Mustangs are coming off a 44-0 shut out of the Superior Panthers. The game will have a kickoff time of 6 p.m. 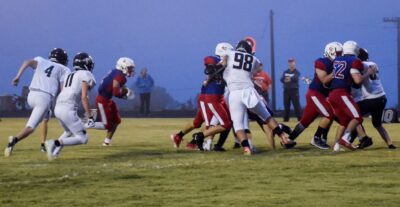 Mathias Medina with the ball as the front line blocks for him. Photo by Adrianna Brown 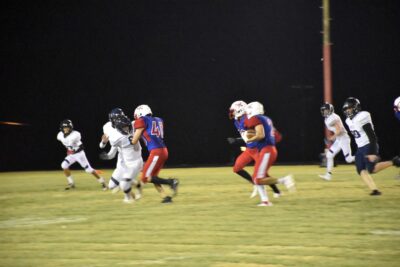 Ralphie Valencia running the ball with Scotty Gonzalez blocking for him.  Photo by Adrianna Brown