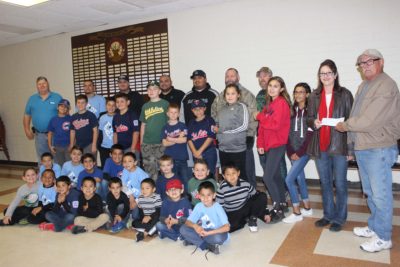 The San Manuel Elks Lodge have been sharing some pre-Christmas joy in the Tri-Community and giving others in the community a chance to spread some joy of their own.

Last week, the Elks presented a $2,000 check to the San Manuel-Oracle Baseball/Softball Little League. This was a “Community Rewards Grant” earned by the members of the San Manuel Elks Lodge. This is part of the Arizona Elks Major Project.

Baseball and softball players and coaches from last year arrived Wednesday to take part in the presentation.

Members of the San Manuel Elks were also on hand to help show off all the donations from Elks members as well as community members and corporations for the annual Southern Arizona Elks Veterans Christmas Party at the VA Hospital in Tucson.

San Manuel has been participating in this event for more than 20 years, under the organization of Tom Miller. “We’re just one link in the big chain,” Miller said. 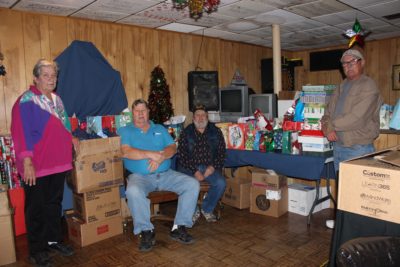 Organizers Judi Miller, Tom Miller, Bill Mayer and Terry Curtis with the thousands of dollars worth of gifts for Veterans.

In addition to the VA Hospital wards, the Elks deliver presents to the Bind Rehab and the Veterans Home.

The local Elks were still wrapping gifts on Wednesday and didn’t have a final tally of the amount that was donated, but it was more than $6,500.