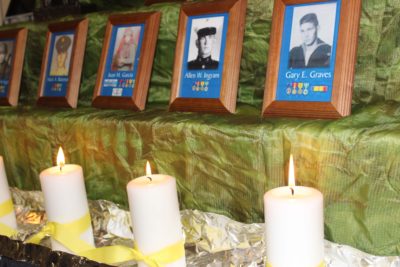 In memory of the fallen San Manuel High School graduates during Vietnam.

They were sons. Brothers. Uncles. Friends. Boys, really. They grew up playing in the streets of San Manuel, Oracle, Mammoth and Tiger. They were athletes, students, classmates.

And when their country called for their service, they didn’t hesitate. They left their homes and their families behind and were sent to the front lines in Vietnam. 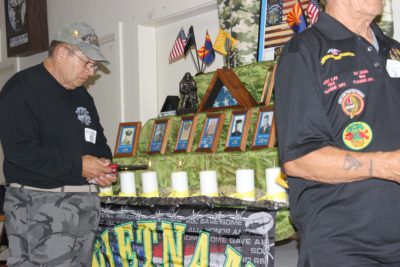 Alberto D. Chavez lights a candle as each of the Vietnam 7’s name is spoken.

It was their lives that the San Manuel High School classes of the ‘50s and ‘60s sought to honor, but they extended the ceremonies to include other Veterans from the Tri-Community, those who served in World War II, Korea, Vietnam and Desert Storm. They honored the Purple Heart Medal recipients and the memories of servicemen who were killed during World War II.

The Veterans Day Celebration was held Saturday, Nov. 10, at the San Manuel Elks Lodge. Local VFW Post members Margarito Benjano and Lloyd Bradshaw presented the colors and Frank A. Martinez, another VFW Post member, lead the Pledge of Allegiance. Following the National Anthem, sung by all in attendance, Pastor Emeritis John “Tinker” Roybal offered the opening prayer. Dinner was provided and served by the family of Frank A. Martinez.

Alfred Trejo, who served 30 years in the Navy, served as the emcee for the ceremony, which included a moving candlelight tribute to the Fallen 7, brave young heroes who sacrificed their lives in Vietnam.

Following a Native American Prayer, offered by Alberto D. Chavez, another local Veteran, the families and friends of the Fallen 7 were invited to share thoughts about their lives. 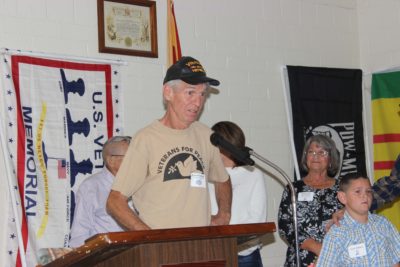 “The Marines were tough guys over there,” Klesch said. “They had it tough.”

The Marines were deployed for 13 months at a time. Klesch, who was drafted into the Army, said that his deployment was for 12 months. He said he was heartbroken over his friend’s enlistment in the Marines. Allen enlisted while still in high school. Klesch, who was a few years older, was drafted and arrived in Vietnam just two weeks before Allen was killed.

“Allen was killed in his 13th month,” Klesch said. Klesch said that he sent Allen a letter shortly after his arrival in country promising that he would find him. The letter was returned to him unopened.

While it was hard on him, it was devastating to Allen’s parents, Klesch said.

“From that moment on, their whole world fell apart. Allen was their only son,” Klesch said. “The sun set and went down in their hearts for Allen.”

Allen was a little more than two months shy of his 19th birthday. 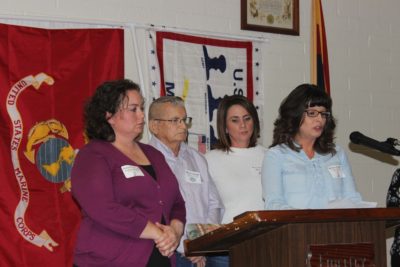 The family of Tony Arriaga tells about his life.

Other families spoke about their loved ones too.

“When I think of Mark, I don’t think so much about him as a soldier, although I was very proud of him. I think about how much we used to fight when we were growing up until I was about 12 and he was about 14 and then we became friends. I think mostly because he wanted me to listen to him play his guitar and applaud. I was his audience,” she said. “He was getting really good at it.”

One of her favorite stories, she said, was that no one in her family knew he could sing. One night, Stephanie remembered, she went to a school dance at San Manuel High School and was shocked to find her brother playing in the band.

“Mark got up and sang Twist and Shout. His voice was so good,” she said.

Stephanie went home after the dance and told her mom who was just as shocked.

Mark was 20 years old when he was killed.

The ceremony ended with a presentation to each of the Veterans in attendance and a thank you to all who served. 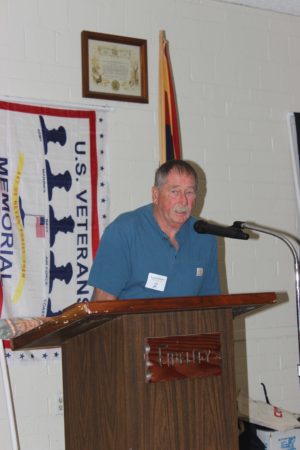 Larry Graves said of his brother Gary Graves: ‘He was a great brother.’

Veterans Day comes only once a year, but we should remember our Veterans and their families every day of the year.

Thank you to the SMHS Classes of the ‘50s and ‘60s for such a wonderful program.