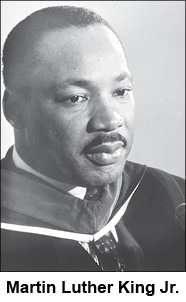 Martin Luther King Jr. was born on Jan. 15, 1929. King was recognized as the chief spokesman and a leader of the non-violent civil rights movement. The movement successfully protested racial discrimination in federal and state law.

Efforts were made by legislators calling for a national holiday in his honor shortly after he was murdered. In 1979, the bill made it to the U.S. House of Representatives where it was defeated by five votes.

Many labor unions got involved and the Martin Luther King Jr. Day was promoted in their contract negotiations. The King Center, which had been started up by King’s widow, Coretta, started soliciting support from corporations and the general public. Musician Stevie Wonder wrote a song in 1980 titled “Happy Birthday” to promote the campaign for the King holiday. The song was released as a single and the lyrics lamented the fact that anyone would oppose the idea of a King holiday that celebrates peace, “love and unity for all of God’s children.” The song would help to realize King’s dream.

Wonder continued to campaign for the King holiday and hosted the Rally for Peace Conference where six million signatures were gathered on a petition for Congress to pass the law. It was the largest petition supporting an issue in American history.

A bill finally reached President Ronald Reagan’s desk in 1983. He signed it, making Martin Luther King Jr. Day an official Federal holiday. It would first be observed on Jan. 20, 1986 with a large commemorative concert with Stevie Wonder as the headliner. It is observed on the third Monday in January each year.

Arizona did not observe the holiday until 1993. It would not be observed by all of the 50 states until the year 1999. In Arizona, it was a lesson in civil rights to get the King holiday observed. Shortly after it was observed as an official Federal holiday in 1986, a bill was introduced in the Arizona Legislature but was quickly defeated. Then Governor Bruce Babbitt, using an executive order, declared it a paid state holiday. The State Attorney General issued a legal opinion declaring the holiday illegal as it was not in the Governor’s authority to issue an executive order on a bill that had been defeated. He threatened to sue the new incoming Governor over the issue.

Evan Mecham became governor in 1987. In his campaign he said he would cancel the King Holiday. Mecham cancelled the holiday and told civil rights activists and the black community that “King doesn’t deserve a holiday.” He later told a group of black community leaders, “you folks don’t need another holiday, what you need are jobs.”

In reaction, a protest march was held on Jan. 19, 1987, the date the King Holiday would have fallen on. Conventions scheduled to be held in Arizona were cancelled. Musician Stevie Wonder announced a boycott of the state. After several months of criticism, Governor Mecham declared a non-paid holiday in King’s name. Reaction to Mecham’s decision was unfavorable.

The boycott continued and began to impact the economy. Claims of prejudice were made against him after he defended the use of the word “pickaninny” to describe a black child. He told a Jewish audience that “America is a Christian nation” and made a comment about Japanese businessmen’s eyes “got round” after they saw how many golf courses are in Arizona. After the National Basketball Association cancelled a convention, Mecham made the comment, “Well, the NBA. I guess they forget how many white people they get coming to watch them play.”

Signatures for a recall were gathered within his first year in office. One recall committee chairman Ed Buck was a registered Republican and gay businessman. Mecham supporters made a bumper sticker which said “Queer Ed Buck’s Recall.” Before the recall election could be held, Mecham was impeached due to pending fraud and perjury charges. It would still take until 1993 for MLK Day to become a paid holiday after Arizona voters finally voted it in.

The legacy of Dr. Martin Luther King Jr. is an astounding one. His success in the civil rights movement not only helped millions of African Americans but all Americans. His involvement with the movement started in 1955 with the Montgomery Bus Boycott in Montgomery, Alabama. The boycott started after Rosa Parks an African-American woman refused to give up her seat on a bus to a white man. Because of this Rosa was arrested. The boycott lasted more than one year. As African-Americans were the bulk of the paying customers for the bus company, they financially suffered. The federal government stepped in after a Supreme Court ruling declared the laws of Alabama and Montgomery requiring segregation on the buses was unconstitutional. During the boycott, King was arrested and spent two weeks in jail. His home was also bombed. The successful protest and boycott brought King national notoriety.

In 1957, King was elected to the presidency of the Southern Christian Leadership Conference. The group used the organizing power of black churches to carry out non-violent protests in seeking civil rights reform. King spoke throughout the south and organized mass demonstrations and non-violent protests. He wrote books on civil rights which inspired others to demonstrate and protest. He led a march of 250,000 protesters to Washington D.C. where he made his famous “I have a Dream” speech where he envisioned a world free of discrimination.

Congress would enact the Civil Rights Act in 1964 followed by the Voting Rights Act in 1965. Dr. King also participated in the anti-Vietnam War movement and was working on empowering the poor when an assassin’s bullet ended his life but not his dream.

“I have a dream that one day this nation will rise up and live out the true meaning of its creed: ‘We hold these truths to be self-evident: that all men are created equal.’

“I have a dream that my four little children will one day live in a nation where they will not be judged by the color of their skin but by the content of their character.

“I have a dream today.

“I have a dream that one day, down in Alabama, with its vicious racists, with its governor having his lips dripping with the words of interposition and nullification; one day right there in Alabama, little black boys and black girls will be able to join hands with little white boys and white girls as sisters and brothers.

“I have a dream today.

“This will be the day when all of God’s children will be able to sing with a new meaning, ‘My country, ‘tis of thee, sweet land of liberty, of thee I sing. Land where my fathers died, land of the pilgrim’s pride, from every mountainside, let freedom ring.’

“Let freedom ring from the snowcapped Rockies of Colorado!

“Let freedom ring from the curvaceous slopes of California!

“But not only that; let freedom ring from Stone Mountain of Georgia!

“And when this happens, when we allow freedom to ring, when we let it ring from every village and every hamlet, from every state and every city, we will be able to speed up that day when all of God’s children, black men and white men, Jews and Gentiles, Protestants and Catholics, will be able to join hands and sing in the words of the old Negro spiritual, ‘Free at last! Free at last! Thank God Almighty, we are free at last!’” (MLK, I Have a Dream)