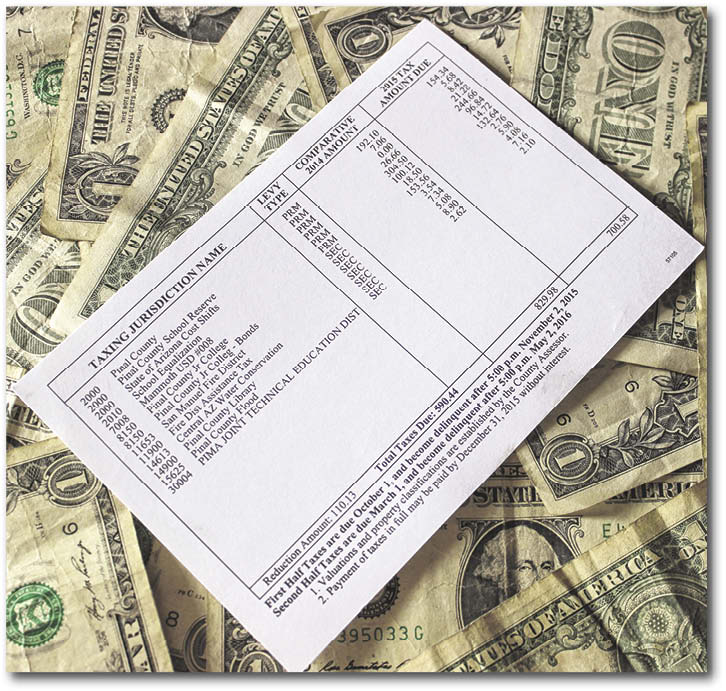 Just how are the tax bills calculated?

Pinal County, Arizona With the first day of Autumn each year comes not only the leaves changing colors but also the mailing of the property tax bills by the Pinal County Treasurer’s Office.

But what is new this year is how the property bill is computed. As a result of voters approving Proposition 117 in 2012, beginning with the 2015 invoice all charges will be computed based on the Limited Property Value (LPV). The result will be property tax bills that will change less radically from year to year and thus not shock homeowners with big increases.

Despite all tax levies being computed based on LPV, the FCV will continue to be noted on property tax bills.

FCV is synonymous with market value that is derived annually by using standard appraisal methods and techniques employed by the Pinal County Assessor’s Office. More reliable than, say for instance the Zestimate one might find for one’s home on Zillow.com, these methods take into account things like home improvements that could raise FCV.

According to Laura Andonie, chief deputy assessor in Pinal County, FCV estimates for most county property owners took a tumble after the state economy took a tumble in 2008. In San Tan Valley, home prices were depressed as a result of foreclosures in 2009-2012 that saw homes selling at county auction for less than half of their original value. Since then FVCs have been on the rebound, though property tax bills for many are still only about 60% of what they were in 2008.

The LPV is a value determined pursuant under Arizona Statute 42-13301 as an equalizer to protect property owners from wild swings in property values. While LPV and FCV start at the same value, LPV under new regulations in Proposition 117 can increase no more than 5% per year. For instance, if the current FCV is $100,000 but the prior year’s LPV was $95,000, under the 5% rule, the LPV value can go up only $4,750, so the new LPV is $99,750 for property tax purposes.

“The longer one owns a home, the more likely the gap between FCV and LPV will grow,” Andonie explained. “But under the statute, LPV can never exceed the FCV, so you can never be taxed more than the estimated cash value of your home.”

Property taxes in Pinal County, as in all Arizona counties, pay for mostly bread-and-butter items. About a quarter goess to pay for county services, including the Sheriff’s Department. Smaller amounts support services provided by the state and by cities and towns within the county.

Much of the rest supports education, including elementary, high schools junior colleges and even a small amount to an area JTED (Joint Technical Education District) school.

Property owners have some control over how much they pay in taxes to support education.

Under Arizona law, the state legislature enacted an education budget in which funds are distributed to individual school districts, charter schools, community colleges and the three state-supported institutions of higher learning (University of Arizona, Arizona State University and Northern Arizona University). School districts supporting public elementary schools and high schools are permitted under law to get extra funding for maintenance and operations by asking local property owners to enact an override to secure up to 15% more than the sum allocated by the district on a per pupil basis, to be paid through an extra charge on the property tax assessment.

When approved by voters, the override charge for the maximum percentage sought by the district is computed into the property tax for the next five years, with the percentage reduced by one-third in the sixth year, another third in the seventh year, and going to zero in the eighth year. As a result, school districts go to the voters every five years to maintain the maximum override.

More citizen input on property taxes occurred in late September when voters signed petitions to recall two members of the Central Arizona College Governing Board. The Board voted last spring to cover loss of revenues from the state education budget by raising the revenues secured through the county property tax by 45%. Board members reacted to public criticism by voting in June to trim the tax hike to 20%. A group called Citizens for Fair Taxation passed around petitions and succeeded to get enough signatures to force a recall election next year for Board members Rita Nader and Gladys Christensen. If all necessary signatures are verified by the Pinal County Recorder’s Office, the recall election would likely take place as early as the March 22, 2016 Presidential Primary.

Being the primary resident of one’s Pinal County home has a benefit in that property owners will this year receive a $126.56 reduction for state aid to education funds. Rental properties and those homes occupied by snowbirds and other part-time residents do not get this reduction.

Still other charges are for the Fire District Assistance tax (revenues from which are shared only by areas that are part of a municipal or rural fire district) and for that local fire district. Residents of the recently approved Pinal Rural Fire Rescue & Medical District (serving the area along Route 77 and Aravaipa Canyon surrounded by Mammoth, San Manuel, Kearny, Dudleyville and the eastern border with Gila County) won’t see a charge on their property tax bill until next year.

Fire district charges on property tax bills are approved by the districts’ boards of governors, which are selected

Some property owners may see Pinal GRD or Phoenix GRD on their bills. These assessments go to the Central Arizona Groundwater Replenishment Project (CAGRP), which replaces water taken for home and business use from underground aquifers with water pumped in from Lake Havasu or the Colorado River. But not all. Some water suppliers include this payment in their water bills while others record the number of gallons used by homes and are billed according on actual usage on their property tax assessments, said Dennis Rule, manager of CAGRP.