Hearings to determine what can further be done to eliminate small town blight along the Copper Corridor was held by the Arizona House Committee on Land, Agriculture and Rural Affairs on Oct. 16 at the Superior (AZ) Town Hall. Attended by both government official and concerned citizens, the meeting produced several proposals that Committee member State Rep. Dave Cook (R-L8) promised would be explored in the state legislature during the 2019 session. 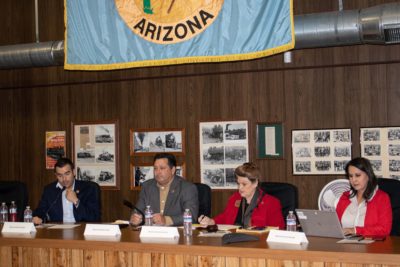 The hearings were requested by mayors of Copper Corridor towns that were having a hard time combating the proliferation of deteriorating homes and business storefronts in their communities.

“The blight problem has been building for decades,” said Superior Town Manager Todd Pryor in his opening remarks to the Committee.

It resulted from a ripple effect that began when mining operations curtailed operations or shut down in the region. People who lost their jobs as a result could no longer afford their homes and walked away, leaving the properties to become overgrown and dilapidated. This further resulted in less spending in the local economy, resulting in businesses shutting down and leaving storefronts unoccupied and likewise deteriorating.

The blight problem was exasperated by real estate speculators who acquired abandoned properties for pennies on the dollar, then gamed the tax system to get very low tax rates by letting the properties deteriorate further, Pryor noted.

“This means that a building paying thousands per year may be next to one paying just hundreds. These rates are set by the County Assessor and the State Board of Equalization, and the towns have been unable to get this corrected. The towns do not have standing with the Board of Equalization and the public cannot make their feelings known. With the low property tax rates, the speculators are not motivated to return buildings to productivity, and thus seem to be holding out for top dollar on properties diminishing in value,” Pryor testified.

Small towns also do not have the resources to flight blight through code enforcement. 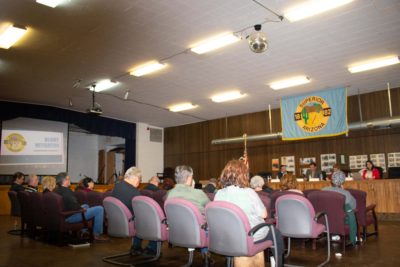 Blight in rural communities was the topic of interest at this legislative committee hearing held in Superior last week.

“The legal sophistication exhibited by the speculators has been difficult for towns to match and state laws are weighed heavily in their failure. Individual property rights have been weakened as property owners may find that a neighbor allows a structure to degrade far enough that a common wall collapses, damaging their structure. The cost of professional code enforcement, including and enforcement officer and attorney time, is far more than most small towns can afford, so they result in part-time half measures that never get a handle on the problem. If they do go to court, they quite often lose, as the large legal firms the speculators can afford outperform the municipalities’ representation,” Pryor noted.

“The low cost of maintaining these properties is the core problem,” he added. “A building may cost a speculator a few thousand dollars per decade, at the same time costing a town thousands per year in lost revenue, increased fire suppression, criminal activity and code enforcement. That is not even counting lost economic activity. This means that poor residents and seniors on fixed incomes are subsidizing the speculators. While a town works hard to improve despite the blight, the speculators reap the rewards without paying any of the cost.”

To address the problem of blight, Pryor proposed that the state legislature provide the following help:

• The towns need to have standing to appeal valuations by the Board of Equalization.

• The Board of Equalization needs to have representatives from rural counties to represent their unique interests.

• All hearings of property valuations need to be public hearings in the community affected, with notification requirements to all property owners within a certain distance similar to zoning hearings.

• The state needs to fund dilapidated building funds through the Arizona Commerce Authority as a key factor in economic development.

• Commercial buildings in town centers should be required to maintain utilities and safe conditions, and be inspected on a regular basis.

Rep. Cook thanked Pryor for his proposals, and added that changes in the law may be needed to enable small towns to clean up abandoned buildings of garbage and asbestos. This could include lowering the availability of Brownfield Funds from the U.S. Environmental Protection Agency to towns with populations below 5,000 residents.

Pinal County Accessor Douglas Wolf weighed in on a query by Jim Schenck on what to do about buildings that have deteriorated into salvage properties. Schenck owns a building across the street from the old dry-cleaning building in Superior that has deteriorated to just a shell with no windows. He offered to buy the property to rehabilitate it into a useful structure, but the speculator quoted a price equal to what he paid for his storefront when it was in pristine condition.

Salvage properties have no market value, but laws favor the owner charging any price he feels it is worth, Wolf noted. Towns should be able to do somethings about such worthless structures without them being held hostage at the expense of property owners around them.

Pinal County Treasurer Mike McCord suggested that the Pinal County Board of Supervisors help get rid of dilapidated properties by amending a law that allows property held by the state by tax deed to the county, town or special tax district for transportation or flood control purposes to also include public safety. This would bring under the law properties that have deteriorated to the point of collapse or being a fire hazard, he said.

Michelle Yerkovich, Globe (AZ) code enforcement specialist, testified that small towns in the Copper Corridor should be able to do the same as Phoenix when dealing with abandoned properties. Phoenix secures the properties, gets rid of weeds and overgrown vegetation, and fixes broken windows. It then puts a lien on the property for the cost of such work. If the lien isn’t satisfied, Phoenix forecloses on the property and sells it to someone willing to pay the lien, back taxes and further costs to fix up the property.

Mark Heck with the Arizona Health Care Cost Containment System noted a special circumstance involving some blighted properties. Elderly property owners who leave their homes to go into long-term care under the state’s healthcare program often sign over their property to nursing homes to pay for their care. Over time the nursing facility will own all or part of the patient’s property but won’t get payments until the property is sold. But in the interim the property may not be maintained.

Heck proposed that the state reduce its claim on the property if it is sold to someone willing to pay back taxes and accumulated maintenance fees, thus eliminating a source of blight.

State Rep. T. J. Shope (R-L8) congratulated attendees for their “very good ideas” in combating blight and promised to join Rep. Cook in exploring them during the 2019 legislative session.

“This is what good government is all about; government coming up with good ideas to help citizens and businesses overcome problems. We’ll get on them in January,” Rep. Cook concluded.