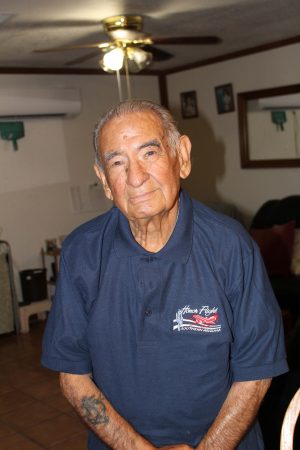 Each veteran has an assigned guardian to escort them. The guardians are volunteers and pay for their own expenses. At the present time, Honor Flight’s priority is World War II veterans. They also honor those Korean War and Vietnam veterans who have a terminal illness with the trips helping them realize their dream of visiting the memorials. World War II veterans are passing swiftly (at the rate of 800 per day) and it is important that the “Greatest Generation” be honored. In the future, Honor Flight has plans to see that Korean War and Vietnam Veterans as well as veterans of other wars are given the opportunity to become part of the Honor Flight program.

Onofre’s son Marty Tafoya will be his guardian. Onofre’s Honor Flight departed Sept. 2 and they will return on Sept. 4.

Onofre Tafoya was born April 8, 1929. His mother died when Onofre was young leaving his father to raise five kids. Onofre was the oldest and quit school to go to work. He got a job working in a bakery in Winslow, Arizona at age 13. He moved to Prescott, Arizona and was working in a bakery there when he saw a big poster with a picture of Uncle Sam and the words “I Need You” at the post office. He then went to see the recruiter and joined the Navy.

A poster similar to the one that influenced Onofre Tafoya’s decision to join the military.

The local recruiting station was in the basement of the post office. Onofre was 14 and lied to the recruiter about his age saying he was 17. At that time, there was a policy that allowed for a 17-year-old to enlist and serve until they were 21. He told the recruiter he had no birth certificate when he was asked for one and the local truant officer would end up signing for him, as he needed an adult to grant him permission to join.

Onofre turned 15 before he arrived at San Diego for basic training. He said he liked boot camp.

“I was in good physical shape and was young,” he said.

Onofre Tafoya when he was in the Navy.

The first time on a boat, he got sea sick. After basic training, Onofre was assigned as a passenger-laborer on a destroyer that would transport the sailors to Pearl Harbor on the island of Oahu in Hawaii. It took them seven days to get to Hawaii as they were zig zagging to avoid Japanese submarines. Onofre spent two years there. He was assigned for a short time to a submarine. He says at the time, submarine crews were all volunteer. He went out on some short patrols around Pearl Harbor but did not like it and was reassigned to the base where he was a baker.

The Navy tried to get him to volunteer to be assigned to a place called Bikini Atoll but he told them no. He would find out later that they were testing atomic bombs there beginning in 1946 when he would have been there. Bikini Atoll would later become uninhabitable due to radiation. Many of the local inhabitants would become sick and their food supply, mainly fish was contaminated by radiation. Navy personnel were exposed to radiation during cleanup of target ships and from their close proximity to the target area.

Onofre served in the United States Navy three years and 13 days. He was discharged on April 7, 1947. He served in the Asiatic-Pacific Theater and received the Asiatic-Pacific Medal; American Area Medal; Victory Medal and Good Conduct Medal.  You may know him from working with him at the Magma mine. He is also know for the two great books he wrote about the mine operations in San Manuel, Mother Magma and Los Mineros The Hardrock Miners of San Manuel.

Thank you for your service, Onofre.

The miner staff would like to thank Fred Ordorico for bringing this story to our attention.